What your skin should expect when you’re expecting 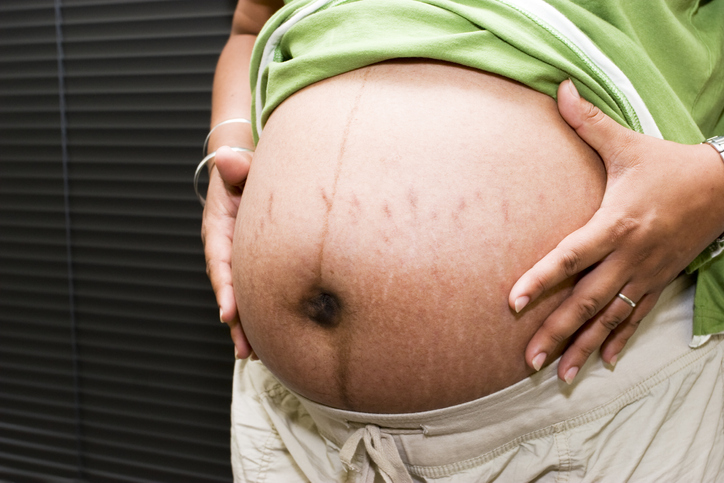 Are you pregnant or thinking of becoming pregnant? You’re probably prepared for morning sickness, weight gain, and an expanding belly. But did you know your skin can also undergo a variety of changes when you’re expecting? These changes are due to normal alterations in hormones that occur during pregnancy. Rest assured, most skin conditions that develop or worsen during pregnancy are benign, and tend to improve following delivery.

Darkening of the skin

A large majority of women experience darkening of their skin due to hormone shifts that occur during pregnancy. You may notice that the areas around your thighs, genitals, neck, armpits, and nipples darken. Many women also develop linea nigra, a dark line extending between the belly button and pubic bone. It is also not uncommon for women to experience darkening of their pre-existing moles and freckles. (If you are concerned that a spot on your body is growing or changing more than you’d expect, see a dermatologist for further evaluation.) However, most pigmentary changes tend to return to normal following childbirth, but may take many months to do so.

Melasma, the “mask of pregnancy”

Perhaps the most cosmetically distressing pigmentary change to occur in pregnancy is melasma, also known as the “mask of pregnancy.” Melasma, which can appear as dark patches on the forehead, cheeks, and upper lip, develops in approximately 70% of pregnant women. Melasma is exacerbated by exposure to sunlight. To help prevent it, consistently use sunscreens with sun protection factor (SPF) greater than 50, wear sun-protective clothing and hats when spending time outdoors, and avoid too much direct sunlight.

Melasma can sometimes persist after delivery, though it tends to improve after childbirth. If you wish to treat melasma after delivery, there are many treatments that can be prescribed or performed by a dermatologist, including skin lightening agents, chemical peels, and certain types of lasers. Hydroquinone, which is one of the most commonly used lightening agents on the market, is not safe to use during pregnancy or while breastfeeding. If you want to use a cream that has brightening properties while pregnant, look for glycolic acid or azelaic acid in the ingredient list.

Stretch marks, also called striae gravidarum, are pink or white streaks of thin skin that develop in up to 90% of pregnant women. They occur due to expansion and stretching of skin during pregnancy, and they are most frequently seen on the abdomen, breasts, buttocks and hips. Stretch marks tend to develop in the late second and third trimester.

Many treatments, including vitamin E-containing oils, olive oil, and cocoa butter, have been used for prevention and treatment of striae, but unfortunately there is limited data to suggest the that any of these products are truly effective. These pink or red marks tend to fade to skin color following delivery, although they rarely disappear entirely. Evidence suggests that topical hyaluronic acid, tretinoin, and trofolastin can be used, with varying degrees of success, after delivery. If topicals are not effective, research has shown that several laser treatments, energy-based devices, and microneedling can lead to visible improvement in striae by increasing production of collagen (a structural component of skin) and decreasing blood flow to the lesions.

Many women experience breakouts during their pregnancies, especially those who had acne prior to pregnancy. This typically occurs in the first trimester and is related to the surge of estrogen causing overproduction in oil glands. Guidelines for the treatment of acne during pregnancy are scarce due to the lack of safety data. Dermatologists often recommend a combination of topical azelaic acid and/or benzoyl peroxide. If these treatments are not effective, topical antibiotics such as erythromycin or clindamycin can be added in some cases. Oral antibiotics, including erythromycin, azithromycin, and cephalexin, may be used for persistent cases. Oral and topical retinoids, normally a mainstay of treatment for moderate to severe acne, can result in birth defects and should be avoided during pregnancy.

If you develop any skin eruptions during pregnancy that cause concern, you should be evaluated by a dermatologist prior to starting any medications.

The post What your skin should expect when you’re expecting appeared first on Harvard Health Blog.