Performers are using their craft as a vehicle for activism 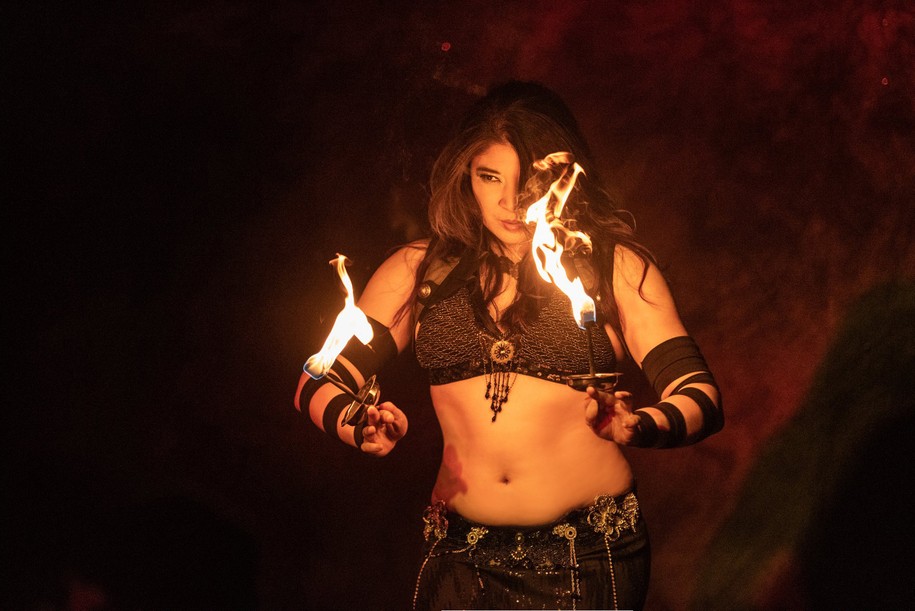 This election cycle has brought massive get-out-the vote efforts and awareness campaigns, but the ones by artists are arguably the most fun and entertaining. Art has never been apolitical, and the last four years have brought a surge in the number of artists using their craft to resist the current administration and speak out about ongoing injustices.

Music is commonly used as a form of protest and resistance, but while lyrics and instrumentals can be extremely powerful, it’s not the only creative way to bring awareness to a cause. As the election nears, artists and performers with a wide range of different skill sets are using their unique talents for advocacy and activism. From belly dancers to drag performers to hip hop artists to burlesque, here are some of the ways performers are using their talents to promote civic engagement and actively participate in civil discourse.

Raks Geek, a Chicago-based organization started by musician Dawn Xiana Moon that features belly dancing and fire spinners, has held several fundraising events for organizations that support a wide range of different groups and causes, including the American Civil Liberties Union, the LGBTQ community, and immigrants. When deciding on which cause to hold a fundraiser for next, Moon says they try to uplift smaller, local organizations where the money would be more useful. Depending on the event, all or part of the money goes toward the cause. The events always feature people from underrepresented groups.

“We’re usually trying to find groups that are not super big, with some exceptions,” said Moon in an interview with Prism. “Our resources are not huge so we want to make the best impact that we possibly can … A few thousand dollars to a very small organization can actually make a difference.”

Last year, Raks Geek held a fundraiser for RAICES, an organization that serves migrants and families separated at the U.S.-Mexico border. The issue of immigration is personal for Moon, who is an immigrant from Singapore. Moon was initially apprehensive about using her art for explicitly political purposes, but it didn’t stop her from speaking up about her beliefs.

“I’m an Asian American woman and I’m an immigrant, [so] my very existence is political,” she said. “Instead of running away from the fact that it’s political, I might as well embrace it and use what platform I have.”

Moon also uses her music to spread hope and plans to continue to utilize her talents to spread positivity, regardless of the outcome of the election.

“If we give up hope and we stop fighting, that is not a good long-term strategy and just not a very good way to live,” she said. “I very much believe in going down fighting, even if you know you might not necessarily see the outcome of the thing that you’re working towards.”

The drag community has also been active in this area. Drag Out the Vote uses drag to educate and engage potential voters. They register voters at drag events and advocate for increasing voter access. With the pandemic limiting in-person outreach, drag kings and queens have also utilized phone text banking, touchless voter registration, and online performances.

“I think Drag Out the Vote is so exciting because with RuPaul’s Drag Race being so popular and other drag so popular, there’s an excitement—especially among young voters—around drag,” said Kylie Monono, an ambassador for Drag Out the Vote, in an interview with Prism. “[We] utilize that excitement and encourage people to not only register, but to actually get out and vote and make a plan on how they’re going to vote.”

Drag has been used as a form of activism for decades, from the Stonewall riots to the more recent protests against Facebook’s “real name” policy.

“Drag is a really powerful tool and art form,” said Monono. “People love seeing drag and people get happy when they see it and respond so favorably. I’ve noticed that when I’m out in drag, it’s so much easier to get people to have a conversation.”

The topic of women’s health has been at the forefront of the national consciousness in the wake of Amy Coney Barrett’s confirmation to the U.S. Supreme Court. However, long before Coney Barrett’s confirmation took place and discussions about overturning Roe v. Wade took off, there were ongoing efforts by people in the burlesque community to widen access to women’s health services.

Earlier this year, the Houston, Texas-based Dem Damn Dames Burlesque held their sixth annual fundraiser for Planned Parenthood with a goal of raising $10,000. At the event, they had burlesque performances, raffles, prizes, and on-site voter registration.

Other adult entertainers looking to make an impact have gotten creative in their approach. In September, a group of Atlanta-based exotic dancers posted the viral PSA video titled “Get Your Booty to the Poll,” which featured several women dancing while dressed in red, white, and blue lingerie. In the video, the dancers encourage people to register to vote while talking about the issues on the ballot that can directly affect peoples’ lives.

“This video really started with the death of George Floyd in May and us feeling like there was a better way to voice a need for change than just walking around with signs for a few days,” one of the dancers in the PSA told Fox 5 Atlanta. “We wanted to do something different and get people, especially men, to vote.”

The dancers also directed people to their website, which provides voter registration information and additional resources.

Hip Hop for Change, a Bay Area-based hip-hop education organization, recently did a campaign with Breathe for Justice to promote a rap contest. The organization collaborated with When We All Vote, Sierra Club, and 350.org to increase turnout for the contest, which was aimed at mobilizing and energizing young voters around election-related issues.

“The Hip Hop community has always been passionate about political issues and remains involved in the fight for voter’s rights and access to the polls,” said Eric Sasz, the event director of Hip Hop for Change, in an emailed statement to Prism. “Being the voice of our culture, political organizations reach out to us to amplify our voices and mobilize the masses.”

Through the contest, organizers invited participants to submit a short rap, song, poem, or spoken word piece to discuss how they’ve been impacted by COVID-19, social injustice, climate change, or environmental racism.

“The socio-economic issues of environmental racism, police violence, climate change, and COVID-19 are the most important issues for the Hip Hop community today,” said Sasz. “These issues are at first on the minds of our community members walking into the voting booths, so it’s important as a cultural leader in our community that Hip Hop For Change furthers the dialogue.”

It’s not the first time the organization has been part of a collaboration on this level. The group has previously partnered with the East Bay Regional Park District, Kaiser Permanente, and other groups and institutions to raise awareness around issues ranging from COVID-19 testing to increasing diversity.

“We are tapped all the time by organizations looking to utilize the power of Hip Hop to organize, mobilize, and educate,” Sasz said.

Art and performance always has been a way to connect with unique audiences and prompt discussions about world events. Several artists told Prism they’re keeping a close eye on the election and are already brainstorming about which causes they’ll be promoting next. The decision, they said, will heavily depend on which president takes office in January.

Carolyn Copeland is a copy editor and staff reporter for Prism. She covers racial justice and culture. Follow her on Twitter @Carolyn_Copes.