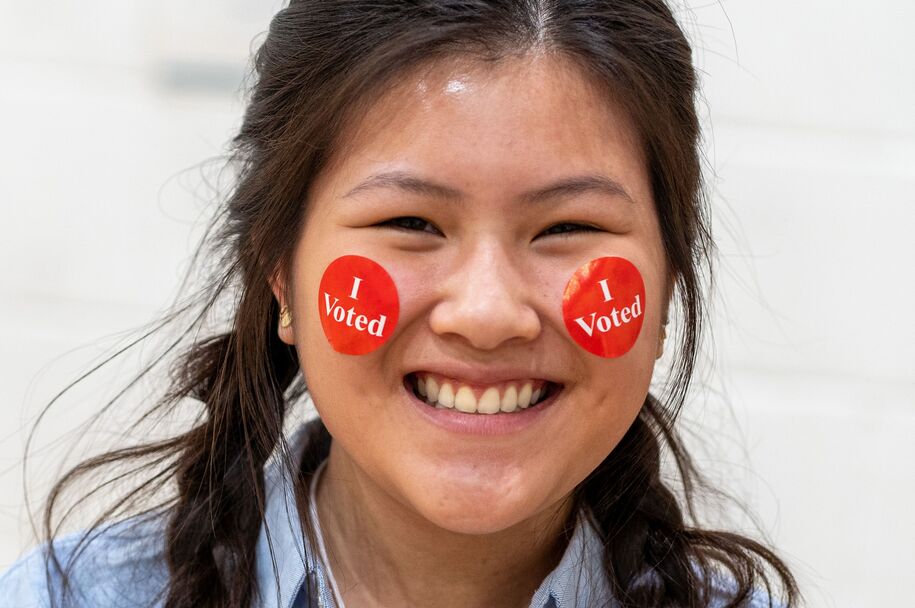 Young voters brought the heat to this election year. Millennials and Gen Z not only made a wave in voter turnout but encouraged others to do so via technology and social media. Since the start of the year, prominent young people have taken to social media to share political information and opinions. Online political activism has seen an increase amid the pandemic, with young people partaking in not only social justice initiatives but in efforts to get out the vote.

Continuing a trend of increased political participation since the midterm elections in 2018, millennial and Gen Z voters are turning out in record numbers. While Baby Boomers have long been the largest eligible voting population, new generations are changing the norm. According to census data analyzed by the Brookings Institution, more than half of Americans are millennials or younger— making up at least 37% of the eligible voting population.

More than a week before the election, data showed that at least 7 million voters between the ages of 18-29 already voted, compared to 1.9 million in the age group who voted in 2016. “With a week of early voting (when the data was collected) and Election Day still to come, in Texas, Florida, North Carolina, Georgia, Arizona, and Montana, young people have already cast at least half as many votes as they did total votes in the last presidential election,” Tufts University’s Center for Information & Research on Civic Learning and Engagement (CIRCLE) reported.

First-time voters have increased significantly this year. According to NBC News Decision Desk and TargetSmart, more than 20% of early voters nationwide are people who didn’t, or couldn’t, vote in 2016. “While early vote turnout has shattered all records, the most meaningful statistic is the number of ballots cast by voters who didn’t turn out in 2016,” Tom Bonier, TargetSmart CEO, told NBC News. “These are the voters who will determine how the 2020 electorate differs from Trump’s winning coalition in 2016.” He added that these new voters are not only younger and more diverse, but more likely to vote Democratic— and he was right data compiled by CIRCLE found that in more than 30 states young people supported Biden in majority double-digit margins.

NEW – YOUTH VOTING STATE BY STATE: We’ve got data on how young people voted in 30+ states. In nearly every state, they supported Joe Biden, often by big double-digit margins. And in two states (GA and VA) youth made up more than 20% of all votes cast! https://t.co/BkVQDVmfXJ

The narrative that young people do not care is long over. Young people are turning out in high numbers and are expecting change. Don’t believe me? Head to Twitter and see for yourself. Young people are not only sharing why they voted but encouraging others to do so, too.

Lucky for you, we gathered some posts below from both the #youthvote and #firsttimevoters hashtags.

Young people are turning out to vote by the MILLIONS, and we haven’t even had Election Day yet. We’re seizing our power and making our voices heard. Thank you for staying in this fight with us. If you haven’t already, don’t miss this moment, VOTE before polls close tomorrow! pic.twitter.com/sZAavcUAYD

Let the record show that this is at 7:25am ET. The #youthvote is fired up. https://t.co/M7Vu7YKYGy

From the campus of the University of Pittsburgh: YOUNG PEOPLE ARE TURNING OUT. pic.twitter.com/aX7PA9tJAR

“As our nation has learned that every vote matters from our previous election, I exercised my right to vote to assure my voice is heard and for the betterment of this nation’s future,” Harris Khan, a Pakistani-American from New Jersey, told Daily Kos.

My super proud mamu just sent me this video of my cousin Sadaf voting for the first time. They grow up so fast, but I’m soooooo proud of her. 🥲😍😭❤🇺🇸 #VOTE#firsttimevoter pic.twitter.com/vmveGSxt2M

I’m proud to say that I have exercised my right to #VOTE #FirstTimeVoter ✊🏾 pic.twitter.com/v6GehAMTNC

“As a first-generation American, I’ve been reminded of the sacrifices my parents faced to get to the U.S. throughout my life. Despite the imposter syndrome I’ve faced, I know that I have earned every opportunity that has come my way. Voting in this election was especially important to me because I am actively shaping the future of our country,” Ashley Ramcharan, an Indian-American from Upstate New York, told Daily Kos.
“This year, I was fortunate to intern for Congressman Paul Tonko (NY-20). This experience has given me an inside look into a campaign and allowed me to build connections. I’ve faced criticism from conservative family members, but I think that only fueled my determination,” she added.

#FirstTimeVoter 🇺🇸❤️🤍💙✌🏽 First time voting and it felt good! 😋 I voted for our nation, our future! Shout out to everyone who is working at the polls! #yourvotecountsnc pic.twitter.com/qHtpFfBlqR

“…to all people regardless of their birth, the right to live, to work, to be themselves, and to become whatever their visions can combine to make them. This is the promise of America!” ~The American Adventure 🇺🇲#FirstTimeVoter #VOTE pic.twitter.com/jYuGqvfDWN

This is my first time voting!! As a first generation Latina I am excited to vote out Trump & his administration 🥳 #GOTV #firsttimevoter pic.twitter.com/4UsgxlzAds

Our family is finally having our voice heard in a General Election! My sisters voted for @JoeBiden, @KamalaHarris, @MarkWarnerVA, & @DonBeyerVA They also voted NO on Amendment 1! People or color deserve an equitable voice in VA’s redistrciting process #VoteNoOn1 #FirstTimeVoters pic.twitter.com/jR7CReYdgU

VOTE VOTE VOTE We did it and so should you! I was so excited to vote for the first time today! Get out there and change the world! #vote  #firsttimevoter #GoVOTE2020 #rockthevote pic.twitter.com/7jC1KbwClI

My #FirstTimeVoter was up at 5 am today to exercise his right to vote. Feeling so proud & hopeful #BidenHarris2020 pic.twitter.com/CmTh5IqcOP

Always glad to vote, but proud that my daughter voted too! What a way to start your voting career! #ElectionDay #FirstTimeVoter pic.twitter.com/dcb02s80AH

My cousin who is the daughter of immigrants is voting for her first time! She’s only 18 years old and is casting her vote keeping her parents, tíos, and cousins like me who can’t vote yet and I’m totally weeping 😭😭🥺#alientovotes cc:@AlientoAZ pic.twitter.com/p8QiqzKbK0

With the millions of young folks voting before and during the election, there are a lot more stories to share. Head to Twitter and see for yourself the overwhelming number of young Americans who are hoping for change and a better future.