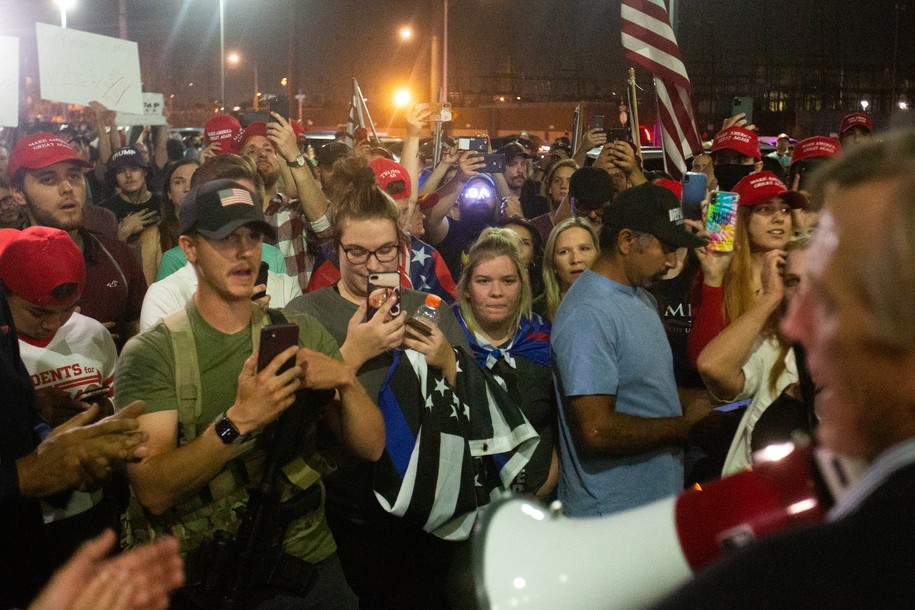 On Wednesday night, a mob began gathering outside the Maricopa County Elections Department offices in Phoenix, where clerks were counting the votes well into the night. Republicans are desperately trying to recreate their successful “Brooks Brothers Riot,” where so-called average citizens demanded the vote count be stopped in Florida during the 2000 presidential election. Some of the people involved in that scheme included Roger Stone, Matt Schlapp, Brett Kavanaugh, and Joel Kaplan, who is now vice president of U.S. public policy for Facebook.

This coup isn’t going as well for the conservative movement for a variety or reasons. First and foremost: the Trump message is stop the vote count in some states and keep going in others.

The mob that showed up in Arizona last night also had mixed messaging. They were chanting “count the vote” while simultaneously making such a ruckus that Elections officials had to keep dealing with them. (In other words, making it more difficult to count the votes.) At one point they walked into the office demanding answers about a conspiracy involving ballots and sharpies. The group erroneously believed ballots where sharpies and felt pens were used would be thrown out, something elections officials had already debunked. That didn’t stop this group from barging in the office to demand answers. With the help of deputies, they were escorted outside, where the MAGA circus grew larger and more heavily armed, thanks to calls on social media from the deplorables below.

Armed pro-Trump protester gave his first name as Rich, age 30. Told me he doesn’t belong to an armed group. “Biden wants to tax our guns like the AR-15 I have with me right now,” he said pic.twitter.com/RwQ17HA8YX

Reporters were threatened by attendees, who chanted “Fox News sucks” off and on throughout the evening, and many reporters left under escort from Maricopa sheriff’s deputies.

My photographer and I have left after one protester threatened us and said he would find where we live. We are filing a police report. https://t.co/mx9cr6MDq1

So, who were those folks who showed up with guns and kevlar vests, demanding the count be stopped?

First up, Rep. Paul Gosar, one of the absolute worst members of Congress. Gosar is fond of spreading anti-Semitic conspiracy theories about George Soros and is so reviled by his own family that six of his siblings filmed ads asking the public not to vote for their brother. They even published an open letter in their local newspaper saying the same and that if their parents were still alive, they would have been ashamed of Gosar.

Patriots are meeting in 15 min at the bell in front of the state capitol. We demand all the votes be counted. This is not over. #Election2020 #MAGA2020 ⁦@realDonaldTrump⁩ ⁦@Cernovich⁩ pic.twitter.com/bE0ZF9enqk

Standing right alongside Gosar was Mike Cernovich, a “men’s rights activist” who frequently appeared on InfoWars with Alex Jones. Cernovich was key in spreading the Pizzagate hoax in 2016 that falsely and ridiculously claimed notable Democrats were involved in a child sex trafficking ring being run out of a D.C. pizza parlor.

Lovely pair, right? But, wait—there’s more. ABC 15 reporter Nicole Valdes was on-hand sharing video throughout the evening, and another familiar face stuck out in the group photo below.

UPDATE: Now a massive crowd outside. Way more people than earlier. MCSO being called. Security worried they may try to make their way inside. #ABC15 pic.twitter.com/bhUpHuJFoI

Front and center with the long dark hair and the big bullhorn is Jennifer Harrison of Arizona Patriot, an obnoxious group of anti-immigration bullies who have harassed Democrats and organizations helping immigrants. In 2019, she walked into the Phoenix Democratic headquarters and dumped two bags of trash she claimed were “donations.” You may also recall this very viral moment she had, when she was literally laughed out of a city council meeting.

Harrison has also been known to film and harass immigrants, as well as church employees who provide services for immigrants.

In October, Harrison was formally charged with felony Identity theft and you are probably going to laugh when you read why. From AZ Central:

Harrison is accused of using hotel points that belonged to her former in-laws, using their email address to access their cellphone service account and forging a press credential to access an event at Grand Canyon University where Donald Trump Jr. was a speaker, according to paperwork filed in Maricopa County Superior Court.

She has a hearing coming up this month. Tots and pears, sweetheart.

So, that’s just a glimpse at the fine folks who are out there on the front lines fighting to stop the vote. Or count the vote, depending on the state and whether Donald Trump has a lead there.

At least we can be thankful former Sheriff Joe Arpiao wasn’t there in any official capacity. You can thank the same organizers who drove him out for turning out the Democratic vote in Arizona. We all owe them, and we must follow through to continue growing the coalition they’ve built.

Sign the petition: Elect the president by national popular vote