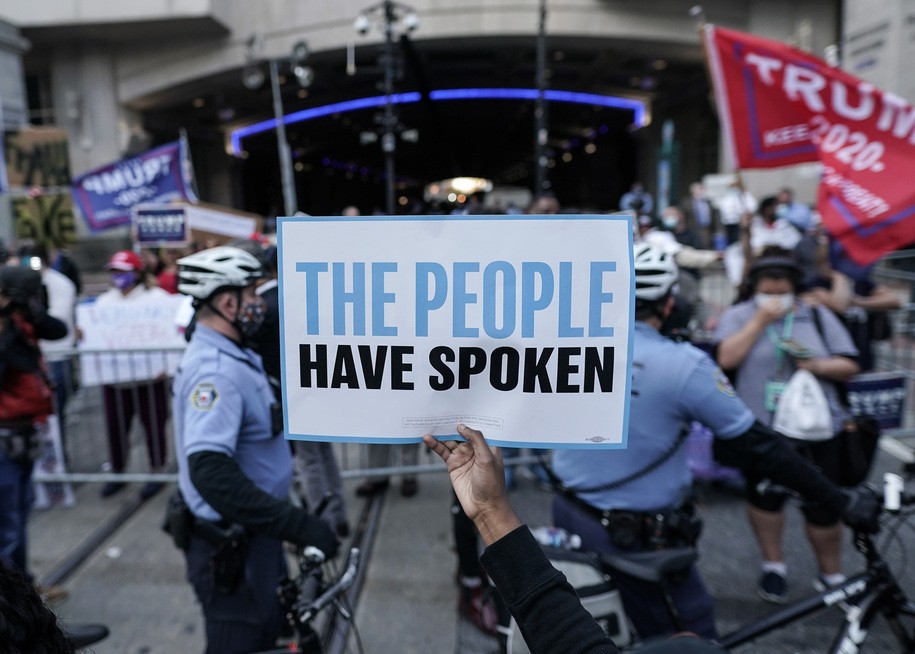 It’s Friday and things look very close to wrapping up. Yes, I’m being optimistic, and no, I don’t underestimate the lows that Donald Trump and the Republican Party can and will plumb to hold onto and concentrate their power. But, unless we have to hit the streets in a physical battle to stop a literal coup d’état, Joe Biden and Kamala Harris will soon be announced as the next president and vice president of our country.

Twitter and the rest of the internet is awash in predictions and jokes, anger, confusion, more jokes, and tons of creativity. Here is some of the pregame celebration fun, some of the lows, and a lot more of the highs from around the WWW.

This one really has made the rounds.

Then there were the sweet reactions to bananas things that Republicans were saying.

“We found this blind woman, whose story had already been debunked by election officials, but we brought her as a prop because it’s all we got. I’m a partisan hack they brought in because I will say anything. We have no evidence, will not take questions and then we will run away.” pic.twitter.com/qgwzmEnUZb

There’s been some absurdism.

And some things to consider.

How is this night different from all other nights? https://t.co/1lRa5vjYY1

And the general funny.

Today’s front page: “One small hand clinging to everything except reality”. https://t.co/vyyUKcrXn3 pic.twitter.com/jnYgXsOfbQ

Anyone hoping for a peaceful transition has never had to pull a toddler out of a Chuck E. Cheese.

This time of year I love watching the states change color.

#JewsAgainstFascism in Philly are now playing a rendition of Mir Veln Zey Iberlebn (We Will Outlive Them), a Yiddish resistance song first sung by Hasidic Jews from the Polish city of Lublin in 1939. pic.twitter.com/ewM5Zx0AtN

Washington Square Park not waiting for the AP call pic.twitter.com/hB9nbhvhi6

And let’s not forget.

America will soon be free of Donald Trump but our work to free all Americans from the greed and abuse of power is only once again beginning.