Abbreviated Pundit Roundup: Election Purgatory, as Victory Not in Doubt 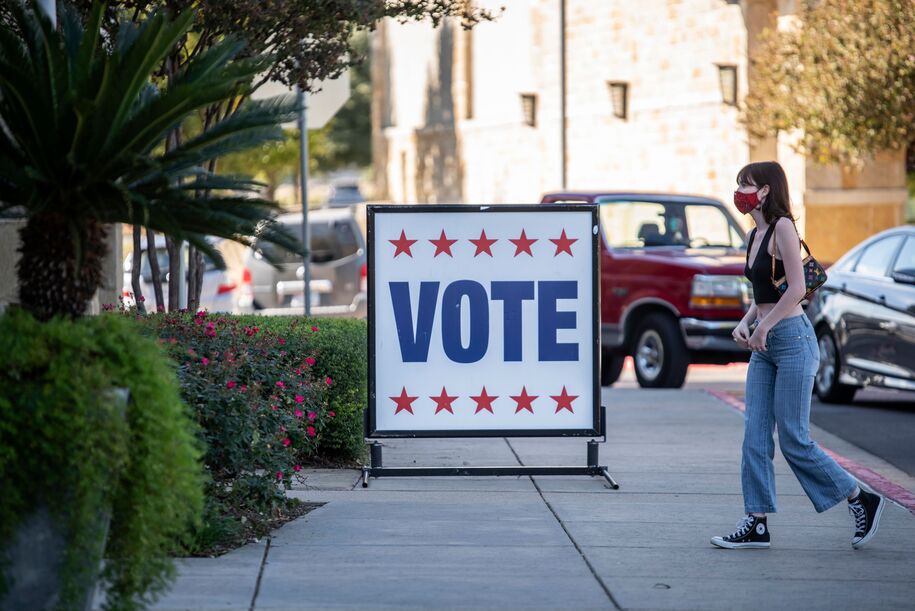 He now leads in Georgia and Pennsylvania, and it seems just a matter of time before the race in Pennsylvania is put out of reach.

According to the Pennsylvania secretary of state, 102,541 absentee ballots remain to be counted. There seems no reason to doubt that Mr. Biden will hold a comfortable lead once all of the absentee votes are counted. So far, absentee ballots have backed him by a margin of 76 percent to 23 percent. If the remaining ballots break the same way, he will end up ahead by about 70,000 votes statewide.

Mr. Biden might win these votes by an even wider margin because the preponderance of the outstanding vote is in Philadelphia and Allegheny (Pittsburgh) Counties — the state’s two most Democratic jurisdictions. He would win the absentee vote by a wider 79-20 margin if the remaining vote broke the same way as the absentee voting in each county so far. That would be enough for Mr. Biden to net 100,000 votes out of the remaining mail ballots, putting him ahead by nearly 80,000 votes over all.

Here’s a good thread on why we are in purgatory:

2/ they appear to have shifted to a “theoretical doubt” standard. Is it theoretically possible something could change. That’s a high standard. And it is important to note that calls don’t end the counting and obviously they shouldn’t. They never do. But there is absolutely …

4/ But the President has managed to scare them out of making the call. I mean, who wants to tell Dad he can’t hit mommy anymore. It’s scary. They’re scared.

A look at the cumulative statewide House vote in states like GA, PA and WI suggests that the prez race in these states could have played out very differently. And are consistent with the idea that Dem primary voters made a VERY wise choice in Biden.

Trump was once their ticket to power. Facing election defeat, he may be their competition.

Aides to Pence say his duty as vice president is to keep his advice to Trump private. He has spent the past several days calling party leaders and donors, gauging their support for the president’s position and working to raise money for a legal fight over the election they hope, against tall odds, might change the outcome in their favor.

But Pence is grappling with a similar dilemma that other ambitious Republicans who have been staunch allies of the president now face. The man who has served as their party’s boss for four years may now become an obstacle to their electoral success – or worse, their competition.

The first litmus test of the 2024 Republican primary has been laid bare even before the 2020 outcome has been formally resolved. How loyal should GOP presidential hopefuls – who have stood as Trump’s most vocal advocates on Capitol Hill or have served in his cabinet – remain to Trump, whose own political story remains unfinished?

Our research has found that red & blue US political maps create increased perceptions of polarization and more political stereotyping, compared to more accurate purple maps.https://t.co/uIOBQBzqS2 Thanks to @geealbers for this new website: https://t.co/PtMT36CWqF pic.twitter.com/3hFuQMQPaQ

Democrats’ margins shrank with some Latinos. But “the overall fixation on Latinos is a scapegoat,” Alexandria Ocasio-Cortez told POLITICO.

Democrats need to scrutinize why “they continue to hemorrhage white voters,” Ocasio-Cortez said. Still, the progressive congresswoman and other lawmakers agree the party should have done more to prevent Trump’s gains among segments of the Latino population in Florida and Texas. They said the campaign should have paid more attention to the wide diversity of Latinos — and tailored their message accordingly.

But as the vice president was closing in on 270 electoral college votes, his campaign was quick to defend their strategy with Latino voters, which they said reflected the nuances among different Latinos. Matt Barreto, a Biden pollster, said if the campaign absolutely had to win Florida they might have organized the campaign differently.

“I don’t see anything on our Latino strategy, for sure, where we’re looking back saying we should have done that better [or] differently,” Barreto said. “We had multiple pathways — and Trump didn’t.”

What I did not realize until I began expanding my work into creating actual media and reporting institutions such as the Washington Examiner (I was the founding online editor) was that U.S. conservatives do not understand the purpose of journalism.

The AP and Fox News say Biden has carried Arizona. Why do other networks say it’s too close to call?

At the heart of the matter is a consortium of vote counters that split in 2016 and how the resulting groups’ formulas use — or don’t use — exit polls.

Now, a day and a half later, CNN and other broadcast networks insist that while Arizona may be leaning Biden, the race is still too close or too early to determine the winner.

Formulas for vote counts and projections are wildly complex mathematically and expensive to create, but there is a simple explanation.

AP and Fox pulled out of a consortium of networks after the pooled effort had produced shaky results in 2016. The rest of the networks stayed in, thinking the system could be tweaked while the AP had concluded it was broken.

The issue was whether the accelerating move to early voting and mail-in voting, advancing cycle after cycle, made traditional election day exit polls invalid. AP said yes and embarked on inventing a new methodology. The Fox News decision desk, an AP client, agreed and collaborated.

The decision desk mainly operates independently of the newsroom and feeds its findings to on-air broadcasters — Bret Baier and Martha MacCallum on Tuesday night. The forecast team is wholly independent of Fox’s evening and morning opinion hosts, who denounced the call.

It doesn’t just expose the weakness in Trump’s character (though of course it does) but also the weakness of his only political trick, which is kicking up media attention 24/7. Without legal standing or facts, it all becomes tiresome noise.

Bottom line: Be patient and enjoy watching a master politician undo his opponent through message discipline, patience and a smile. Trump is going down. The rest is noise.

For doctors who think Trump fumbled the pandemic, the tight election is seen as an insult

“We felt like we had the nation’s support until the coronavirus became political and the administration started eroding confidence in scientists,” he said. “The sentiment around supporting health-care workers only lasted as long as it was politically convenient.”

Others doctors have been doing a lot of soul-searching about what their patients might be going through, and how they can better relate to them.

He’s heard from a lot of his patients that they’ve been having a difficult time during the pandemic and are feeling lonely and isolated. Others are concerned about their job prospects, and felt emboldened by Trump’s promises to bring back manufacturing jobs.

He’s recognizing that many of those patients handed Trump a win in Ohio.

“I drive through this former General Motors auto plant on my way to work,” he said. “It feels like a mausoleum, a symbolic representation of what the region is going through.”

They basically bought the con.

NBC News: Today, there were at least 122,365 new Covid cases in the United States. A new single day record.

As the president takes a blowtorch to American democracy, people like Ted Cruz and Lindsey Graham—who called the process “lawless” and said “everything should be on the table,” respectively—are fanning the flames.
The entire premise of Donald Trump’s life is that he has never once been defeated. His project, and that of those around him, then, has been to maintain that illusion. This hasn’t always succeeded. He’s lost plenty of things—money, court cases. But never before has he faced the kind of public humiliation he seems poised to as Joe Biden’s victory becomes inevitable. How does someone who delights in calling others “losers” react to becoming a loser himself, in the most concrete sense of the word? How does the most vainglorious man in America bring himself to accept defeat and concede?

The answer, of course, is that he doesn’t. Unable to face the reality of his circumstances, he is doubling down on his delusions—that the world is conspiring against him; that he’s the big, strong winner he’s always claimed to be. He wants to convince his supporters, the courts, and himself that he is both victim and victor and has made clear that he’ll burn everything to the ground to do so. This is unsurprising. If his decades of public life have taught us anything, it’s that he simply can’t help himself. But the aides and allies who have enabled him these past four years are not bound by his paranoias and neuroses. They’re making a choice. And while some who have stood by him now seem to be taking tentative steps backward, others are sticking, enabling him still as he tries to take a blowtorch to the foundation of democracy.

With a wider vote margin than JFK’s or Reagan’s, a decisive Electoral College win in purple (MI, PA, WISC) along with red (AZ, GA) states from the NE to the SW, defeating a ruthless opponent who held all the keys of power, @JoeBiden has a mandate to restore decency to governing.

America’s Next Authoritarian Will Be Much More Competent

Trump was ineffective and easily beaten. A future strongman won’t be

Now that Joe Biden appears to be winning the presidency, we can expect debates over whether Donald Trump was an aberration (“not who we are!”) or another instantiation of America’s pathologies and sins. One can reasonably make a case for his deep-rootedness in American traditions, while also noticing the anomalies: the early-morning tweeting, the fondness for mixing personal and government business, the obsession with ratings befitting a reality-TV star—the one job he was good at.

From an international perspective, though, Trump is just one more example of the many populists on the right who have risen to power around the world: Narendra Modi in India, Jair Bolsonaro in Brazil, Viktor Orbán in Hungary, Vladimir Putin in Russia, Jarosław Kaczyński in Poland, and Recep Tayyip Erdoğan in Turkey, my home country. These people win elections but subvert democratic norms: by criminalizing dissent, suppressing or demonizing the media, harassing the opposition, and deploying extra-legal mechanisms whenever possible (Putin’s opponents have a penchant for meeting tragic accidents). Orbán proudly uses the phrase illiberal democracy to describe the populism practiced by these men; Trump has many similarities to them, both rhetorically and policy-wise.

Former Missouri GOP Sen. Jack Danforth: “By alleging widespread fraud, President Trump’s purpose is to undermine Americans’ belief in the legitimacy of the election and therefore in the foundation of our democracy. He is causing incalculable damage to our country.”