Abbreviated Pundit Roundup: A Democracy, If You Can Keep It 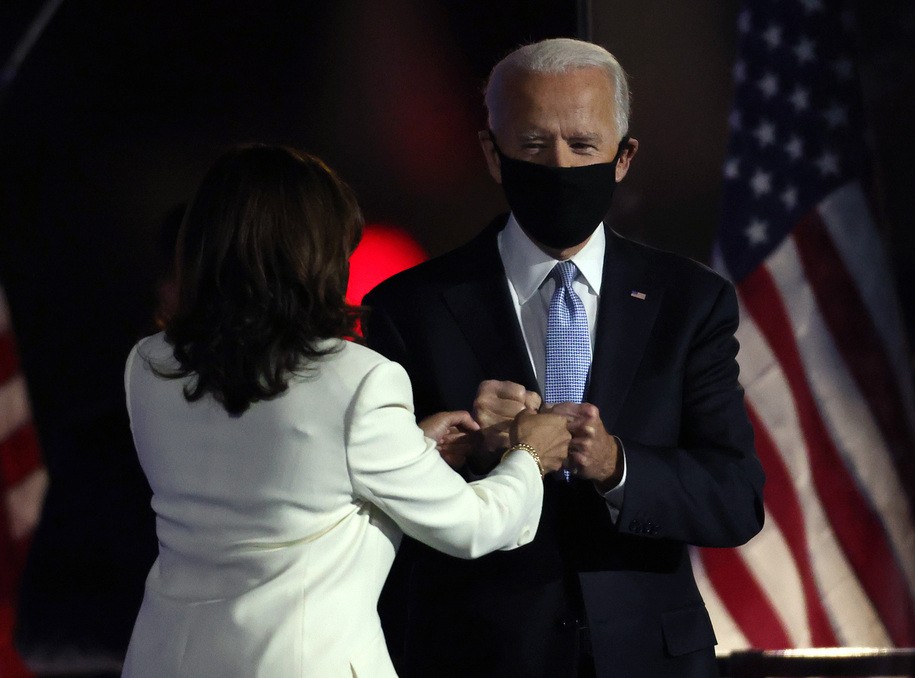 “Victory has a thousand fathers, but defeat is an orphan”. – John F Kennedy

Aaron Astor on this NYT “How Joe Biden Won the Presidency” piece:

Joe Biden will be the 1st candidate to win 51% of the vote against an incumbent president since… FDR.

The End of an Error

This country was always better than Donald Trump.

Trump has been fanatical on the subject of portraying his shocking election in the cloak of an imagined popular mandate. It is why he instructed his press secretary to tell farcical lies about his inaugural crowds, why he has circulated misleading maps showing the vast land areas occupied by his supporters, and why he has depicted his enemies as an elite and alien force. They needed to depict Trump as the true representative of the volk.

In a strange way, liberals needed to believe this, too. The shock of Trump’s election provoked a crisis of self-confidence for his opponents. Humans have an innate need to believe events with profound importance must have profound causes. Trump’s success must reveal some vast and terrible secret. They — Trump’s America — must be, if not more numerous, then at least more authentic, bound together by a secret bond inaccessible to the rest of us. Trump benefitted from polling errors both in 2016 and 2020 that imbued him with a mystical aura, a wizard possessing a secret connection to the heartland that was invisible to the elite.

The simple truth is that was all a mistake — a ghastly, deadly mistake, the toll of which will linger for decades. The precise causes have all been exhumed: bad decisions by Hillary Clinton, an easily manipulated press corps, the FBI, the GRU, the Electoral College sorting out the votes just so.

Sunday night update on Biden’s leads: GA: 10K AZ: 17K NV: 34K PA: 43K His lead over Trump nationally is over 4.4 million and rising. If states had all counted their mail-in ballots early, this election would’ve been called Tuesday night and wouldn’t be seen as all that close.

I keep coming back to how hard it is to unseat an incumbent President. Ultimately it was Trump himself who flubbed the Presidency away. Each misstep added up. Not one single incident – a bunch of failures on pandemic and Floyd protests pushed enough non-Twitter people away.
There absolutely was a reservoir of support for Trump that could have carried him over the top – every incumbent carries it (think of Ford nearly winning 1976; W in 2004 & Obama 2012 each beating their poll numbers in the end). So Biden had to take advantage of each Trump error.
This is especially true for a challenger running on a “restoration” campaign and not on a “new direction” theme. It would be more important to get all anti-Trump voters to vote than to create whole new groups of supporters who might flake out in the end. JOMD helped on that end.

We were fighting demagoguery, thuggery, and authoritarianism. Where were you? https://t.co/lmkG3hgZ6P

How Biden prevailed and Trump fell short in an unforgettable election, according to conversations with 75 insiders.

Trump was perplexed. The economy was strong. The president had built an enormous political infrastructure and was raking in hundreds of millions of dollars. That month, Trump’s campaign conducted a $1.1 million polling project showing him leading prospective Democratic challengers even in blue states such as Colorado, New Mexico, and New Hampshire.

“Sir, regardless, this is coming. It’s the only thing that could take down your presidency,” Parscale told the president.

“This fucking virus,” Trump asked dismissively, according to a person with direct knowledge of the exchange, “what does it have to do with me getting reelected?”

That was exactly the attitude Joe Biden expected from the president. And Biden saw his task as unambiguous.

“Did you see my press conference today?” McKinnon’s Giuliani greeted Update co-anchor Colin Jost. “It was at the Four Seasons. Fancy!”

“I’m glad I made it to the show on time,” he continued. “First I went to 30 Rocks. That’s a granite quarry in New Rochelle.”

Four Seasons Total Landscaping, near the adult book store, across from the cremation center. Got it.

History is going to be absolutely brutal on some of these people.

The election is over at last, called decisively for Joe Biden after four days of extreme care and caution in the democratic process. Unsurprisingly, the sitting president’s response is to attack that process with baseless accusations. For someone who talks so much about law and order, Donald Trump never wants it to apply to him. He cares little for what is legal and not at all about what is right.

I have spent much of my life at the chessboard taking the measure of people under tremendous stress while trying to manage my own. When we’re under pressure, we show our true colors. Sometimes we rise to the challenge to find character and resources we didn’t know we had. Or we collapse, unable to deal with the rush of emotions as the clock ticks down.

With time ticking away on his presidency on Thursday night, Trump cracked under the pressure. He’d managed to keep quiet for two days as the returns slowly came in, but as the results in key states tipped toward a Biden victory, he could control himself no longer and took to the podium.

What followed was Trump reduced to his purest self, a lying, self-centered bully who has finally been punched in the nose. The result was called “the most dishonest speech of his presidency” by CNN expert Daniel Dale, no small achievement.

While the margin was not what pre-election polls suggested, statistically it is quite the achievement for Biden. He beat a 20+ person primary field. Came back after losing IA+NH+NV. And then became the 1st man to defeat a sitting president since 1992.

As Joe Biden was declared the 46th president at 11:30 a.m. ET Saturday, the sound of cheering, horns honking and champagne bottles popping broke out in streets across the county.

I’ve lived in NYC my whole life and I’ve never seen anything like this pic.twitter.com/KVZakF7F5n

It wasn’t just the general elation, it was celebrating the new heroes, the USPS:

Okay this one got me 😭 pic.twitter.com/C0Cghj984f

That happened every time a postal truck drove by.

Everyone in Manhattan going absolutely apeshit every time a USPS truck drives by is the exact energy I need today pic.twitter.com/adFlsCkr08

A lot of Tim Alberta today for his excellent sources:

The Election That Broke the Republican Party

By lashing themselves to the president’s desperate conspiracies of fraud, GOP officials have undermined their own legitimacy.

Never has the unprecedented been so utterly predictable.

At the conclusion of a campaign that exceeded their expectations in almost every sense — picking up House seats, thwarting an outright Democratic takeover of the Senate, running competitively in every presidential battleground state — Republicans could have walked away from 2020 with some dignity intact. They could have conceded defeat to Joe Biden, celebrated their hard-fought successes elsewhere and braced for the battles ahead

But that was never going to happen. This is Donald Trump’s party — at least, for another 76 days — and no Republican who hopes to remain relevant after he’s gone was going to deny him the bloody farewell he’s been building toward.

Did we really think the president worked so diligently these past eight months to create an environment conducive to allegations of mass voter fraud, only to stop short of alleging mass voter fraud? Of course not. Even if the president had been swept in every swing state, and by big margins, he was always going to cry foul. That he lost such close contests — and lost them in a style so unfamiliar to so many voters — only made his reaction all the more inevitable.

This might seem like a small thing, but I just saw a stat that in Georgia’s 7th district (which includes big Asian suburbs like Duluth), 41% of Asian American voters were first-time voters. That’s huge! Add that to the celebration of the amazing work that happened in GA ✨

What it means that the president held most of them.

Since Trump’s victory in 2016, some Democrats have concluded that the relationship is not worth repairing since these former blue strongholds are simply the home to racist deplorables. That has been a mistake. As we argue in our new book, Trump’s Democrats, citizens in these communities admire Trump not primarily because of defects in their personal character. Rather, they like Trump for reasons that are more cultural than psychological.

After living in three blue strongholds that flipped in 2016, we found that many were Trumpy well before Trump arrived on the national political stage. Some of these communities’ most beloved Democratic leaders are brazen, thin-skinned, nepotistic, and promise to provide for their constituents by cutting deals—and corners, if needed. This is partly because their political culture has been shaped by a working-class honor culture that prizes strong men and a tradition of boss-style politics that is more transactional than ideological.

These citizens also have strong loyalties to hometowns that are confronting serious social and economic problems. Unlike the Proud Boys, most Trump Democrats take more pride in their hometown than their skin color. And while the extent of Trump’s success among black and Latino voters this week won’t be understood until the exit polls have been reweighted—and maybe not even then—just looking at some of the places where he performed well at the polls suggests that his appeal cannot be reduced to white nationalism.

“The short answer is that once he leaves the office, his cloak of immunity, actual or implied by (Justice Department guidelines), will disappear,” said David Weinstein, a former Florida federal prosecutor.

The Justice Department has a long-standing policy that a sitting president cannot be prosecuted for criminal offenses. Former special counsel Robert Mueller cited the policy when investigators elected not to make a determination on whether Trump obstructed justice during the investigation into Russia’s interference in the 2016 election.

But that immunity is for actions he took while in office, and “it stops there,” Weinstein said.

The most significant threats against Trump once he leaves office are brewing in his hometown, New York City.

That means no presidential pardon.

A man wearing a Puerto Rican flag tosses paper towel over the fence toward the White House. “Never forget,” he said. pic.twitter.com/tZkalqgB2D

More work to do:

@DemFromCT Please see the garbage coming out of the NE govs office in response to a respectful organized social media campaign by docs begging for help as the pandemic rages here. Notably, he singles out only the female docs. Despicable. Please don’t let this go unnoticed. https://t.co/NHvPfWkH1r

📍False characterization. We *are out here saying to people to celebrate at a distance and wear masks. Outdoors=better. Masks=better. Much more distance=best. Hotels, bars, + indoor restaurants are big problems. It’s why Floyd protests didn’t cause big spikes but Sturgis did. https://t.co/MVULPV5C2m