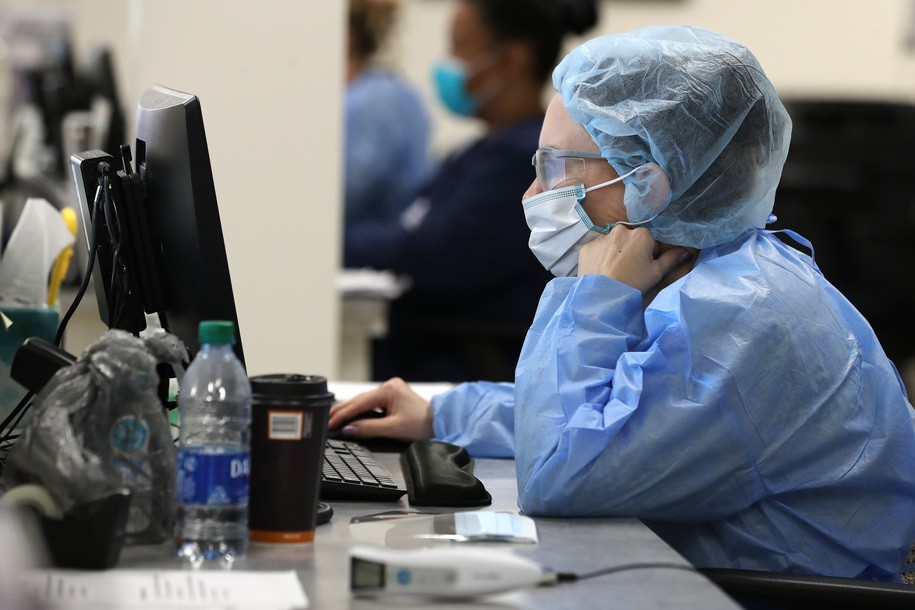 At The New Republic, Melody Schreiber write—How Biden Can Beat Covid-19. Getting the pandemic under control won’t be easy. But health experts basically know what has to happen:

The choice to address the pandemic didn’t have to be political. It was made so by the Trump administration’s decisions to downplay Covid-19 and appropriate safety measures. Now, Biden and his first crop of appointees will have a chance to take a different approach. In his victory address Saturday night, Biden pledged a new coronavirus task force, starting Monday. “Our work begins,” he said, “with getting Covid under control…. I will spare no effort, none, or any commitment to turn around this pandemic.”

Biden has several serious challenges ahead of him to curb the coronavirus’s exponential growth. First, he won’t take office for several months, which means the virus will continue to spread largely unabated if nothing is done. But perhaps most importantly, his administration needs to regain shattered trust in public health officials and agencies. He’s not just starting from scratch in creating a federal response; he’s facing a deficit with nearly a year of disinformation and deep politicization of the virus and its risks.

“The difficult thing for the Biden administration is that they will take office after the worst of SARS-CoV-2 has already torn through our communities,” Dr. Megan Ranney, an associate professor of emergency medicine and public health at Brown University, told me. “The next two months are going to be a defining moment for our country…. His administration will be unable to influence our course until January 20 at the earliest.”

“It starts, first of all, with having a coherent, organized incident command structure.”

The good news is that Biden already has momentum, with a team of experts poised to put already-developed strategies in place during the transition. Assembling that team was the most important first step, Dr. Georges Benjamin, executive director of the American Public Health Association, told me. “Initially, it’s all about leadership and organization. That’s extremely important here,” he said. “It starts, first of all, with having a coherent, organized incident command structure” that “defines who’s in charge.” […]

How to Vaccinate a Planet by Danielle Groen. What it will take to build the fastest inoculation program in history and defeat COVID-19.

Abolish the Senate, by Thomas Geoghegan. Only the House is the house of our dreams […] our first order of business will be to learn all over again how to govern ourselves.

It’s Time to Look Ahead. by Camonghne Felix. Today is a victory, but the fight is far from over.

“It is an old truism that knowledge is power. The inverse—that power is often ignorance—is rarely discussed. The powerful swathe themselves in obliviousness in order to avoid the pain of others and their own relationship to that pain. There’s a large category of acts hidden from people with standing: the more you are, the less you are. In my neighborhood in San Francisco, for example, white women like me don’t need to know that blue is a gang coor, but if a young of color does not know this, he my be in danger. Similarly, knowing the strategies that women use to be safe around men is, for men, optional, if they ever think about the issue in the first place. Every subordinate has a strategy for survival, which relies, in part, on secrecy; every unequal system preserves that secrecy and protects the powerful; better the sergeant not know how the privates tolerate him, the master not know that the staff have lives beyond servitude.” ~~Rebecca Solnit, “Nobody Knows” (2018)

Damn, much gratitude to the Menominee Tribe, who turned the fuck out and helped the county get to an 82% Biden vote. https://t.co/ndlOjB2EBg

At Daily Kos on this date in 2016—Win or lose, white nationalist groups see a bright future after Election Day:

Even if Donald J. HateFluffer goes down in defeat tonight, America’s various extremist and racist groups are feeling pretty good about this election. It’s the start of something big, they say.

“Trump has shown that our message is healthy, normal and organic — and millions of Americans agree with us,” said Matthew M. Heimbach, a co-founder of the Traditionalist Youth Network, a white nationalist group that claims to support the interests of working-class whites. It also advocates the separation of the races. […]

“What you can’t say is that we’re just a bunch of marginal loons,” [Robert Spencer] said. “The truth is that we have a deeper connection with the Trumpian forces and Trumpian populism than the mainstream conservatives do. They’re going to have to deal with us.”

Another reminder here: Donald Trump didn’t do that. House Speaker Paul Ryan did that, by backing Trump as his party’s candidate despite his racist rhetoric. Mitch McConnell did that, by tucking himself into his shell and refusing to come out rather than condemning Trump’s statements against Latinos, black Americans, Muslims, and other targets of the “alt-right.” Trump chose to make his campaign a xenophobic cesspool of “alt-right” conspiracy theories and White Grievance, and while many Republicans whose careers in the party are over (e.g. Mitt Romney) condemned Trump’s paranoid bile wholeheartedly, actual sitting Republican lawmakers did not.