Trump’s baseless, ridiculous election ‘fraud’ allegations continue to be laughed out of court 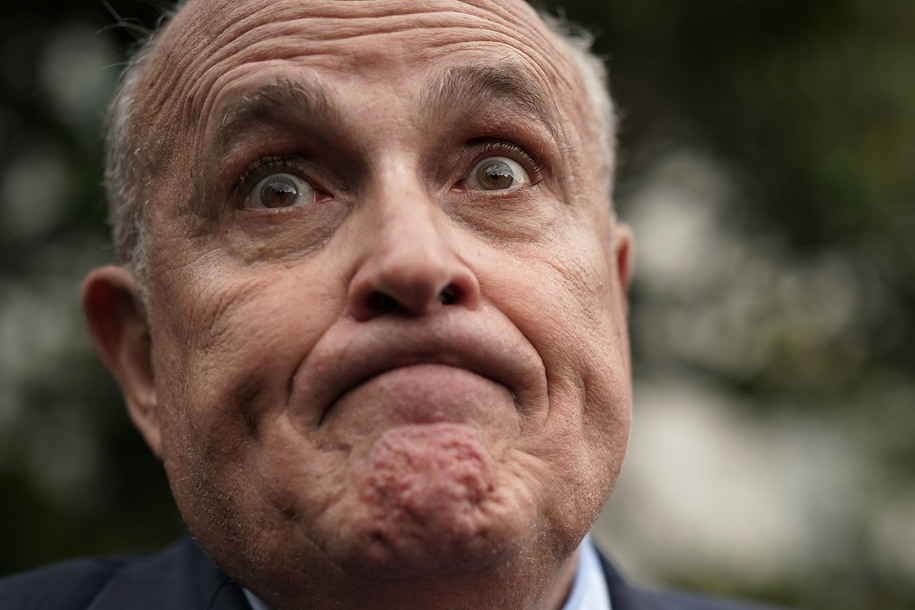 There really can’t be a better metaphor for the Trump campaign’s legal assault on the election than the Four Seasons Total debacle from Rudy Giuliani Saturday. Every tawdry, cringeworthy, slimy, corrupt part of it. And that’s not taking into account just how ridiculous the claims are on the very face of them.

So far, they’ve tried to challenge varying aspects of the count in five states. They’ve been summarily laughed out of court on all five. They are 0 for 5 because they have no valid claims. They’re using the same approach with actual judges in actual courts as they have with “Fox News” and Trump’s rally crowds. After four years of manufacturing ridiculous, conspiracy-theory laden inanities and succeeding in their bubble, they somehow think that’s going to work in the real world. They literally have no other plays in their book than bullshit and belligerence. They are losing because all they have is “speculation, rumors or hearsay. Or in one case, hearsay written on a sticky note.”

In Pennsylvania, they tried to stop the count by saying Republican observers weren’t allowed to see the count. That was demonstrably not true, as admitted by a Trump lawyer who reluctantly told a judge Thursday that there were “a nonzero number of people in the room.” U.S. District Judge Paul S. Diamond’s reply: “I’m sorry, then what’s your problem?” He denied their request. The Trump campaign did secure two “victories” in Pennsylvania, allowing observers to watch from 6 feet away instead of 10 feet in Philadelphia, and getting Supreme Court Justice Samuel Alito to tell election officials to keep all the ballots arriving Wednesday through Friday segregated from the rest of the ballots. Which the state was already doing. There are a few other nuisance complaints in the state, including whatever it is Giuliani is cooking up in the Four Seasons Total parking lot, but nothing real. Nothing that any judge other than Alito (and probably Thomas and Kavanaugh and maybe Barrett) would give the time of day. Even with Alito’s order for the state to do what it already was doing, he didn’t go so far as to tell the state to stop counting, which is what Trump wanted.

The campaign is trying in Michigan, too. And failing. Monday morning, the campaign was notified that their submission for an appeal is “defective,” missing four key elements including a copy of the order that they were appealing in the first place. The campaign was challenging the ballot count in Michigan in two separate suits, both of which they are losing by being unable to prove their allegations of impropriety in the counts. “The City of Detroit should not be harmed when there is no evidence to support accusations of voter fraud,” Judge Timothy M. Kenny wrote in denying their request to delay certification of results in one case.

RNC Chairwoman Ronna McDaniel had a news conference Friday alleging that election workers in Detroit were told to backdate ballots and said she’d informed the FBI, which has no comment on the whole thing. She also said that election workers in Rochester Hills, Michigan, had given 2,000 Republican votes to Democrats in a clerical error and got a blistering response from Tina Barton, the GOP city clerk of Rochester Hills. She said that the switch was an “isolated mistake that was quickly rectified” and called McDaniel’s allegation “categorically false.” She laid into McDaniel in a video she released on Twitter. “As a Republican, I am disturbed that this is intentionally being mischaracterized to undermine the election process,” and really lit into when the Post asked her for further comment. “I have spent 15 years building my reputation of being a good election official—not only a good one, but a great one—and to have someone make a statement that we committed fraud of some kind, that 2,000 ballots were found, I couldn’t stand by and not respond.”

There’s the same story in Nevada and Arizona and Georgia. The Trump campaign cooks up some wild story with absolutely no evidence to back it up, or even worse, shows fraud on their side. In the case of Nevada, they tried to bring a voter forward who said she’d been denied the right to vote at the polls because someone else had stolen her mail-in ballot and filled it out. But as it turned out, the election officials had that completed ballot, with an exact signature match. They had also given her the chance to cancel that ballot and vote again by signing an affidavit swearing that her original ballot had been stolen. She refused to do that.

The Trump campaign is trying to put together some semblance of a real legal team headed up by conservative activist David Bossie. Who is not a lawyer. In Georgia they’ve got Republican Rep. Doug Collins, who lost his bid for the Senate there. They’ve also got real lawyers now in Arizona and Pennsylvania, supposedly. And, of course, Rudy.

As of Monday, they have Missouri and Ohio filing amicus briefs with the Supreme Court to try to get it to rule that the Pennsylvania Supreme Court acted unconstitutionally in extending the mail-in ballot deadline by three days. The SCOTUS conservatives, before the election, flirted with the idea of saying that a state Supreme Court didn’t have jurisdiction over state election laws. Now that the election is resoundingly over, and those votes in Pennsylvania can’t possibly make the difference anyway, they might decide to save face and ignore all that.