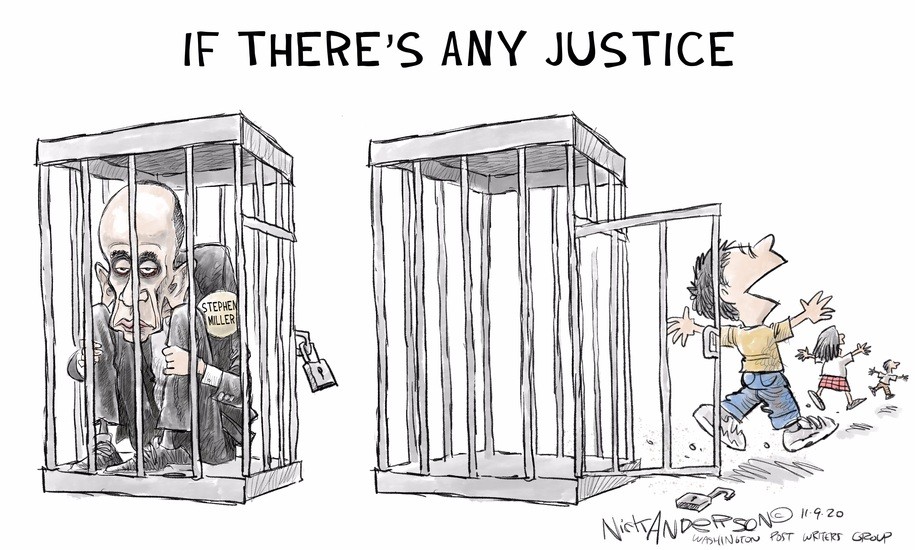 There’s both more and less than meets the eye with the GOP fantasy about Joe Biden being the president-elect. It changes nothing about the election result, but tells the country everything about the modern GOP.

Calls from foreign leaders continue to pour into Joe Biden, with the world acknowledging what most Republicans so far have not: He is the incoming president of the United States. https://t.co/H1hO4xwrDQ

Shakespeare on the 2020 elections:

Life’s but a walking shadow, a poor player That struts and frets his hour upon the stage, And then is heard no more. It is a tale Told by an idiot, full of sound and fury, Signifying nothing.

(I’m guessing this Bill Shakespeare guy is an elector in a swing state.)

NEW: We spoke to 11 members of the Electoral College in swing states. Nearly every one does not buy the GOP’s baseless efforts to undermine the election results, and they have the following message for America: Joe Biden won. https://t.co/zNgC1vQOZl

Is it Trump abandoning the pretense of governing? Alas, yes.

It just occurred to me that Trump’s refusal to concede means that every day the story is that he lost.

The OAS assessment followed similar findings by an election observation team from the Organization for Security and Cooperation in Europe.

The AJC’s editorial board has fully stayed out of these races the entire general election. No endorsements, no commentary. Makes this even more striking — https://t.co/wtum7SReVP

Two totally empirical and data based observations: 1) It’s become obvious to me that the only reason that the remaining decision desks are not calling AZ is to juice my follower count to over 100k. 2) I can’t use my phone for 15 minutes after posting something. That’s the tweet.

Question: “How do you expect to work with Republicans if they won’t event acknowledge you as President-elect?” President-elect @JoeBiden: “They will.”

As a former conservative activist and journalist, it has been so frustrating to see my former compatriots spreading wild and unchecked claims about “voter fraud.” @jacknicas of the NYT took a deep look at claims of “dead” people in Michigan voting. Link in next tweet.

While examining claims made by right-wing activists who are not credible individuals is a thankless task which elite media editors despise, this is vital and important work in this age of fake news. Here’s the link:

How Claims of Dead Michigan Voters Spread Faster Than the Facts
As the co-creator of NewsBusters, the most prominent anti-media website, I was part of a decades-long tradition of complaining about media elites being “unfair” to conservative views. There is still much to that argument, but eventually I saw that I was missing context.

With the election behind us, it’s time for the US to summon its best, unified effort to contain COVID. So many have been at that since the start, w/ heroism and sacrifice. But the pandemic is now taking full advantage of confusion, anti-science, misinformation, fatigue.
Things are moving rapidly in wrong direction. Time to set a new path to controlling this pandemic.
Its easy to see the current US path is failing. National case numbers higher than ever. Many hospitals under rising pressure. More people w/ COVID in ICUs than since early May. >1,000 deaths a day. US in worst 6th of world in daily incidence. National % positives nearing 8%.
Down this current path lies continued rapid rise in cases. More people on ventilators. Higher numbers of people dying. More survivors with long term consequences. Hospitals under pressure until they can’t provide care for everyone anymore. Shortages of tests, PPE.

Republicans, from McConnell down to Loeffler and Purdue, have decided that the key to winning the Georgia run-off is to stand firmly behind Trump and deny the legitimacy of Biden’s win. Contemplate that for a second, and the consequences for 2021-2022. https://t.co/rTN3xuLCTk

As of Sunday, the tallied votes accounted for 62% of the eligible voting-age population in the U.S. That’s a 0.4 percentage point increase so far over the rate hit in 2008, when the nation elected its first Black president.

I’ve seen some tweets go viral among conservatives claiming there was something odd about the WI and PA margin shifts since 2016. But almost every swing state shifted toward Biden. The WI and PA shifts were actually on the smaller side pic.twitter.com/aV1NJRJDpa

How the Suburbs Moved Away From Trump

Suburban counties across the country turned away from President Trump in this election. That includes suburbs in the Midwest and the Sun Belt, in inner-ring counties and those farther out, in predominantly white communities and more diverse ones.

Suburban counties that were already Democratic-leaning before 2020 tilted more so. And many that were deeply Republican nudged several points away from the president.

This graphic shows how these counties voted in preliminary results this year, compared with 2016. Collectively, they shifted up — toward Joe Biden. That movement, apparent across battleground states, has been crucial to lifting Mr. Biden to the presidency.

Biden’s current lead in Pennsylvania is 47,613 votes. There are 51,868 votes left to be counted. Trump still has not conceded.

“Not our job”: Roberts, Kavanaugh appear skeptical of striking down Obamacare at Supreme Court

The Supreme Court wrestled Tuesday — one week after the presidential election and in the midst of a global pandemic — with the future of the 2010 landmark health care law championed by Democrats and attacked by Republicans, with two justices on the conservative wing of the bench expressing skepticism toward arguments the Affordable Care Act should be struck down in its entirety.

The justices heard arguments stretching two hours in the dispute between groups of red states and blue states over the constitutionality of the Affordable Care Act’s individual mandate, with opponents of Obamacare, including the Trump administration, hoping the Supreme Court will deliver the fatal blow to the health care law they have long sought to dismantle.

But Chief Justice John Roberts and Justice Brett Kavanaugh, one of the three justices on the court appointed by President Trump, both signaled they disagree with arguments from Republican-led states that Obamacare should fall if its individual mandate is deemed unconstitutional.

One of the biggest constituencies that swung to Biden from 2016-2020? Military posts, per @Dchinni analysis:https://t.co/jqfcUsc2aF

This was supposed to be the week that Republicans united behind U.S. Sens. Kelly Loeffler and David Perdue for a pair of Jan. 5 runoffs that could decide control of the Senate.

Instead, the two senators leveled unfounded claims of a disastrous “embarrassment” of an election at fellow Republicans who oversaw last week’s vote – and called for the resignation of Secretary of State Brad Raffensperger.

Big news from Pfizer, with apparent high efficacy (>90%) based on 94 confirmed COVID-19 cases at their interim analysis. A thread on how I interpret this news. Briefly: “Celebrate, but let the process play out over time as intended.” 1/8https://t.co/aqB7GMTEtR