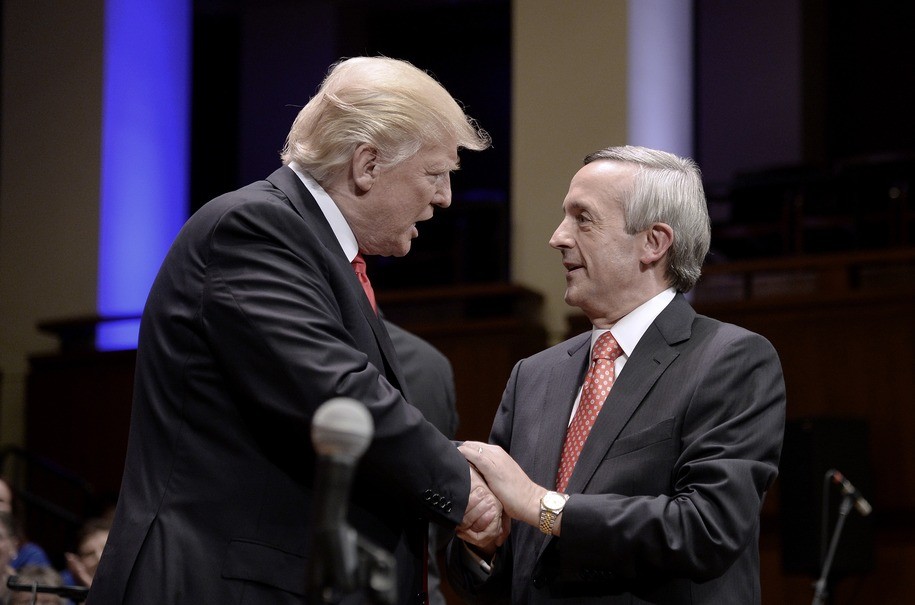 While Sens. Mitch McConnell and Lindsey Graham play fast and loose with the concept of democracy, at least one of Donald Trump’s “top evangelical Christian allies” is going to try and follow the doctrines he professes to believe in. In a column published on Fox News’ website entitled Pastor Robert Jeffress: Biden is president-elect—how should Christians respond? the Texas pastor argued that while this is a “bitter pill to swallow” for many Trump-supporting evangelicals, it’s God’s will.

The Dallas News reports that specifically, Jeffress figures that if God installed President Obama and then Donald Trump, He is also behind the installation of Joe Biden. It’s a classic Catch-22, as Christians who believe that Trump won his 2016 election because God chose him to become president must also accept that God has changed his mind. No word yet on how the pious philanderer and con man shyster Donald Trump is receiving this loss of support for totalitarian rule.

Someone put the screws to Mr. Jeffress as he’s suddenly changed his tune, tweeting “Don’t believe some false media reports that I have “broken” with our great President @realDonaldTrump. I support him completely. We do NOT have a “president-elect” until electoral college votes December 14. I will discuss on “@LouDobbs Tonight” Friday.”

Jeffress has a long career of being everything one has come to expect from an American evangelical leader. For example, you can watch Jeffress, below, explain that “you can’t be saved, being a Jew,” and other awesome things. But Jeffress has been consistent in his support of elections and their outcomes. Back before Trump won the 2016 election, he was asked whether or not he would support a Hillary Clinton presidency, to which he responded: “Absolutely. I – absolutely. And I’ll go one step further. I’ll certainly be praying for her, too.”

I don’t agree with Jeffress on much of anything, but I do agree that Joe Biden has won the election and we should all support Biden’s peaceful transition into the presidency and hold him to the same level of scrutiny that we hold not only Donald Trump, but every elected official.