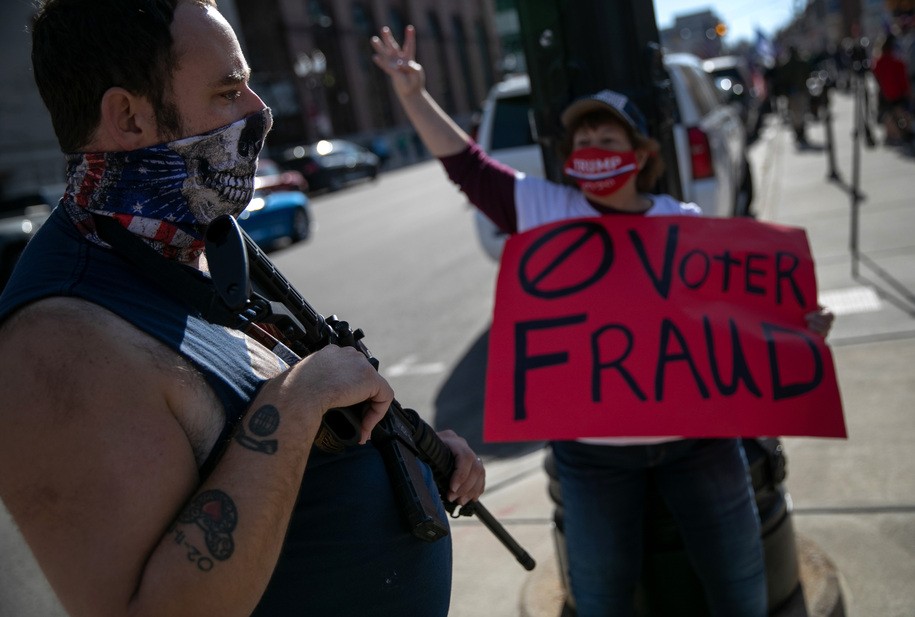 The Trump campaign released a 234-page stack of affidavits from poll watchers in Detroit alleging  supposed intimidation. This Twitter thread highlights many of the absurd claims, such as complaining that independent poll watchers were too liberal, or this one complaining about “a very large man in ‘Count the Vote’ gear,” or this one about people being mean to him. But one stood out to me, because it says so much about the sorry state of the Republican Party and the conservative movement today. Let’s take a look.

One Republican poll watcher found it suspicious that members of the military would vote for Joe Biden. pic.twitter.com/xnFqBluLRS

A Republican poll watcher found it suspicious that Joe Biden would get military votes. As the affidavit states, “I did find it odd that, throughout the day/night, I saw a few dozen military ballots be counted. Although I cannot provide specific numbers or names, I can estimate that at least 80% of the military ballots I saw were straight ticket democrat or simply had Joe Biden’s name filled in on them. I had always been told that military personnel tended to be more conservative, so this stuck out to me as the day went on.”

Oh, this is so juicy.

1. No allegation of fraud.

This is the problem with being trapped in the right-wing media bubble—you aren’t presented with reality. Fact is, rank-and-file service members are disproportionately Black and brown. They come from lower socio-economic backgrounds. And as would be expected, Black and Latinos are more liberal, while poor (heavily Southern) whites are more conservative. This isn’t rocket science. When I served in the Army, the white boys had confederate flags flying in their barracks rooms, Black and Latinos did not. So it would make sense that if you’re observing ballots, in Detroit, from local military personnel serving outside the state, that those ballots would reflect the rest of Detroit—likely heavily Black, and heavily Democratic.

Not to mention, we had a president who didn’t just disrespect Sen. John McCain, a war hero, but also called service members who died in war “suckers” and “losers.” It’s likely why a Military Times poll of our troops found Joe Biden leading 41-37, with 50% of them holding an unfavorable view of Trump.

This is the problem with living in the right-wing media bubble is that it really does make you stupid.

3. Republicans going for volume over substance

It’s one thing for some ignorant Republican poll watcher to puzzle over the results of military ballots. It’s another for Republican lawyers to write it up and then release it to the public. It’s clear that this isn’t a serious effort to detail wrongdoing. They’re just going to say “WE RELEASED 234 PAGES OF WRONGDOING!” in order to con people into thinking that Trump has been robbed. The Washington Post’s David Weigel, talking to us on our weekly web show The Brief, detailed that strategy—get lots of media attention making allegations and filing frivolous lawsuits, fully expecting the media (including their right-wing outlets) to ignore stories of judges or other information and analysis dismissing those claims.

So that one affidavit showed us three critical things in this post-election period: That Republicans remain safely ensconced in their media bubble, misinforming themselves, that they are feeding that media bubble with bullshit claims and accusations, fully expecting any debunking to be ignored, and despite all that, they still can’t find any fraud to point to, anything that might flip the tens of thousands of votes they would need to change the election results.

And to what end? To THIS end:

And a majority of Trump voters think the lawsuits his campaign has announced will “change the outcome of the election.” pic.twitter.com/23exZCdmyj

As long as the MAGA deplorables think the election can be flipped, Donald Trump can keep his grift alive, and Republicans have zero interest in putting the interests of democracy ahead of Trump’s ego and bank account. And maybe, if they play their cards right, they can slip a coup in there.