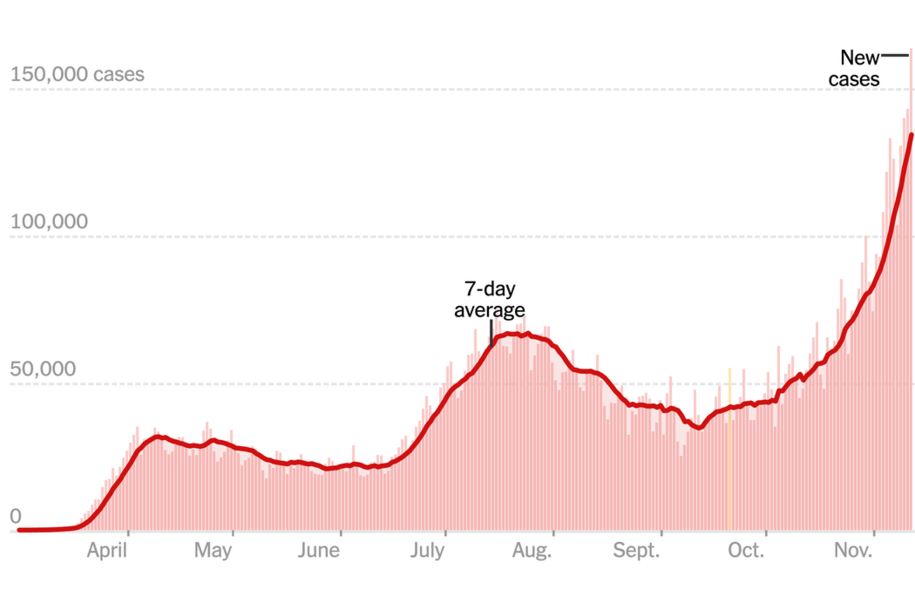 Could State Legislatures Pick Electors to Vote for Trump? Not Likely

Some Trump allies have suggested that Republican lawmakers should override the will of voters who elected Joe Biden the next president.

Could it work? Election law experts are highly skeptical. And leaders of the Republican majorities in legislatures in key states, including Pennsylvania, Michigan, Arizona and Georgia, told The New York Times this week through their offices that they saw no role for themselves in picking electors.

As partisans and analysts puzzle over the higher-than-expected turnout for President Trump (nearly 6 million fewer votes than for President-elect Joe Biden, but still high), they are poring over groups and subgroups: White, non-college-educated men. Suburban women. Young Black men.

But much of the Trump 2020 phenomenon can be explained by a far simpler way of looking at the electorate: There are White evangelical Christians — and there is everybody else.

Entitled and deluded: Trump is a terrible role model for my teams. And a dangerous one.

I coached teens whose futures hinged on their ability to deal constructively with adversity. I have no sympathy for Trump or those who indulge him.

The first high school basketball game I coached, back in the early 1990s, was a one-point win over the reigning league champion. I can still feel the euphoria seeing the buzzer-beating jumper shake the twine. Ten years later, I was at the funeral of the young man who’d made that shot. As his friends and former teammates and I consoled each other, I thought how trivial that first victory was compared to all the losses those young men and I had to get over during that season.

It wasn’t easy trying to teach myself and those young men to accept defeat with dignity and pride and respect for an opponent. At 15 and 16 and 17 years old, they had already lost so much in their lives. Some were in the foster system or living in some other guardian situation because of parental death, incarceration or drug addiction. Many had been in trouble of one kind or another, in school and on the streets. Some were at least marginally affiliated with gangs….

So forgive me if I am less than sympathetic to politicians who have chosen to indulge the wild and dangerous delusions of a 74-year-old man — a man granted every privilege this world has to offer and then some — whose emotional frailty does not permit the tough lessons of loss or failure.

Forgive my contempt and impatience at seemingly intelligent and educated men and women who choose to feign stupidity, and assume a relativistic attitude toward objective facts, at the possible expense of our collective survival.

I just love this:

A photo illustration of Vice President-elect Kamala Harris walking alongside the shadow of civil rights trailblazer Ruby Bridges went viral after the announcement that the Biden campaign had won the 2020 presidential election. It was created by an artist working with the Sacramento-based company Good Trubble.
(Good Trubble)

Committee for Civil Rights and Urban Affairs to Ruby Bridges. As a six-year-old first grader in New Orleans in 1960, Ruby Bridges became the first Black student to attend an all-White elementary school in the South. She showed unforgettable loving forgiveness and courage when faced with ugly screaming White mobs who jeered and taunted her every day as she walked into William Frantz Elementary School. Federal marshals had to escort Ruby to school every day, but she never quit or turned back. Norman Rockwell immortalized Ruby’s courage with his landmark 1964 painting The Problem We All Live With. Ruby astonished her teacher one day when she asked Ruby why she had paused and talked to the crowd of White adults that morning. Ruby responded, “I wasn’t talking. I was praying. I was praying for them.” And a little child shall lead us!

Anne Applebaum wrote the book on why people choose to collaborate with authoritarian regimes. So what does she think of the GOP?

Is it time for Americans to be disabused of the idea that there is any special protection to our system, our political culture?

This is a conclusion that I came to several years ago through the agonizing personal experience of living in Poland and watching one of the political parties here become a populist authoritarian party. Watching it try to undermine democracy, undermine the courts, undermine the media once it came to power. And then, glancing over at the United States and realizing that I was seeing many of the same things.

The one constant I can tell for candidates who lost and blamed “defund the police” is that their own messaging on police violence was nonexistent. If you’re too scared to say what you believe about something, the other side will gladly do it for you.

David Shor’s Postmortem of the 2020 Election

For the Democratic Party, the 2020 election was a devastating victory. Joe Biden won a larger share of the popular vote than any presidential challenger since 1932. The Rust Belt shed some red, while the Sun Belt trended blue. Democrats retained control of the House — and still have an outside shot at eking out a Senate majority.

And yet the party’s activist base is licking its wounds, while its elected officials claw at each other’s throats.

The reason for this odd state of affairs is simple: Barring an unlikely triumph in Georgia’s Senate runoffs in January, the 2020 election will go down as a down-ballot disaster for the Democratic Party. Even as Biden won the popular vote by as much as five points, Democrats saw their House majority shrink, most of their top Senate challengers fall flat, and their attempts to flip state legislatures come up empty. What’s worse, these losses appear attributable to trends that raise ominous questions about the party’s electoral prospects going forward: The most xenophobic Republican president in modern memory made large gains with Latino voters, while white rural America continued its steady rightward march. Most Democrats weren’t prepared for these disappointments.

But David Shor was.

Excellent interview with @davidshor. “The nationalizing of elections means whenever any elected Democrat goes out and says something that’s unpopular, unless the rest of the party very forcefully pushes back every Democrat will face an electoral penalty.” https://t.co/tOvB5W6Zw5

This is the reality we saw coming. “Defund the Police” is not a Democratic slogan, it’s an activist slogan, and Democrats can’t tell activists what to do. But they can see an oncoming problem, and they absolutely need to say what they think, or yes, they will be defined by the opposition. Biden did this superbly. The down-ballot candidates, not so much.

How 2020 Killed Off Democrats’ Demographic Hopes

Demographics are not destiny, says David Shor. And if Democrats want their party to succeed nationally, they’ll have to face that fact and change. Here’s how.

For years, the Democratic Party has operated under one immutable assumption: Long-term demographic trends would give the party something like a permanent majority as the country as a whole grows less white and more urban. President Donald Trump’s reliance on the politics of racial resentment would only quicken the process, solidifying support for Democrats among people of color.

Then came November 3, 2020. And all those assumptions now seem like total nonsense.

“The joke is that the GOP is really assembling the multiracial working-class coalition that the left has always dreamed of,” says David Shor, a Democratic polling and data expert who developed the Obama 2012 campaign’s internal election-forecasting system.

Trump’s near-acknowledgement a few minutes ago: “I will not go – this administration will not be going to a lockdown. Hopefully the – the uh – whatever happens in the future, who knows which administration it will be, I guess time will tell…”

We need a one-two punch to knock the virus down and then keep it down.

A safe, effective, and widely available vaccine would be a game changer, but we’re likely many months away from this becoming a reality. The announcement from Pfizer about its vaccine trial is very encouraging, but the vaccine’s safety and efficacy among groups such as the elderly are still unclear. Even with a vaccine that’s fully vetted and ready to go, it will take many months for enough people to receive it to provide population-wide protection. Until then, we need a one-two punch to knock the virus down and then keep it down.

The first action, closing parts of society, needs to be strategic. Timing matters. The initial widespread closure in the spring poisoned the well. Many parts of the country shut down too soon and for too long. By the time COVID-19 came to areas that hadn’t yet needed to close, people were tired of waiting and resisted continued restrictions. An effective closure needs to be nuanced, specific, and tightened and loosened based on real-time data about where the virus is spreading.

Trump is going to leave the White House in 2 months. What will the press do without Trump, as we get a less-divisive, less-shouty President Biden? And, what will the press do about Trump? How long will we allow him to set the agenda? My latest via @CJRhttps://t.co/uNOL2FMIyB