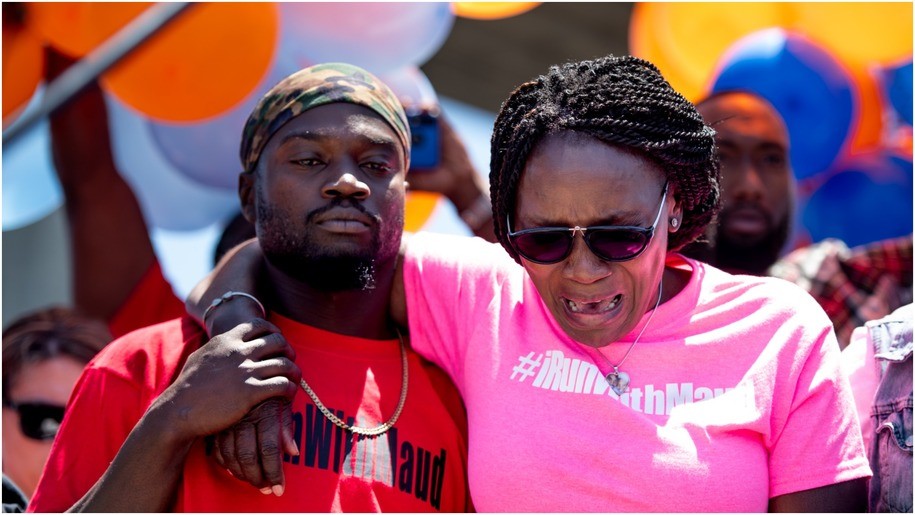 Imagine being accused of hunting down and murdering a man in broad daylight, sending blatantly racist text messages, then having the audacity to have your friends argue you should be released on bond because you’re a good person. If you can’t even imagine it, it’s likely because white privilege hasn’t served you with the same optimistic audacity as it has Travis McMichael. He, his father—former prosecutorial investigator Greg McMichael—and William “Roddie” Bryan are accused of murdering 25-year-old Ahmaud Arbery, a Black man, for doing little more than jogging in a coastal Georgia community.

Still, they argued through their attorneys and character witnesses Thursday that their good character should free them from jail, according to the Atlanta Journal-Constitution. “He’s the happiest person I’ve ever known,” Ashlee Sawyer, a friend of Travis McMichael, testified in court, according to the AJC. Sean Sawyer, another friend of the younger McMichael, described a man who “wants everyone to laugh and have a good time.” The accused man’s mother, Allison McMichael, described her son as someone who “loves home” and “loves his son.” But another of Travis McMichael’s friends, Zachary Langford, testified that Travis texted racist and highly offensive language. But Langford, a true friend, claimed it wasn’t racist at all.

WARNING: This story contains profane language that may be offensive to some readers.

The evidence at hand was a series of text messages and social media posts using the language “slant eye f—ks” and “shooting a crackhead coon,” according to Arbery family attorney Lee Merritt. Langford’s best defense for the disgusting messages was that they, including one describing a “black c–n w/ gold teeth and a high point .45,” were referring to a raccoon. “He felt remorse (in the Arbery shooting). He didn’t like what happened,” Langford said of his friend in court.

The court covered substantial ground Thursday with the hearing serving not only as an opportunity for the accused to make their cases for bond, but also for the state to present motions to the judge, one of which covered whether the racist social media posts in question could be considered. The state subsequently won all of its motions, but the McMichaels clan continued making its case for its patriarchs. Greg McMichael’s wife testified her husband, a veteran who’s never been convicted of a crime, had only been outdoors once in the six months since he’s been jailed, according to tweets from an AJC reporter. Allison McMichael also mentioned her son’s efforts to save lives while enlisted in the U.S. Coast Guard.

Question: Would Travis be willing to give up his guns while out on bond. Answer: If that’s what he would need to say in order to get out— yes.

To her, getting her family out of jail was the priority, but to Wanda Cooper-Jones, Arbery’s mother, the McMichael men have been spared enough. They weren’t even arrested until 74 full days after Arbery’s death on Feb. 23, despite video footage Bryan had taken of the moments leading up to Arbery’s death. “Ahmaud wasn’t allowed to go home,” Cooper-Jones said. She added that “it would be totally unfair” for his accused killers to instead get that opportunity.

Gregory and Travis McMichael weren’t arrested until Thursday, May 7, the Georgia Bureau of Investigation said. And Bryan’s arrest on May 21 only followed viral demands for justice in the case and the assignment of a Black prosecutor, Cobb County District Attorney Joyette Holmes. Two earlier-assigned district attorneys are being investigated for “possible prosecutorial misconduct” for their handling of the case, including George Barnhill, the district attorney of the Waycross Judicial Circuit, and Brunswick District Attorney Jackie Johnson, who formerly employed Greg McMichael.

Merritt said Arbery, a former high school football standout, was unarmed at the time of his death in coastal Georgia’s Satilla Shores community. Gregory McMichael and Travis McMichael “saw him, got their guns, got in a truck, chased him down, pulled up next to him, shot him at least two times, and killed him right there on the spot,” according to a petition to get the men arrested.

“When Gregory saw Ahmaud running in his neighborhood, Satilla Shores, a predominately white community, he and his son immediately armed themselves with a shotgun and a 357 magnum, hopped into their pickup truck, chased him down and shot him,” petitioners said on the website.

The McMichaels have accused Arbery of illegal activity on a property under construction in the area, but the property owner Larry English has said nothing was ever taken from the site. “Even if something had been though, I will say, Mr. English has been very clear that he would never have wanted anything like this to happen,” Elizabeth Graddy, English’s attorney, said.

In court, Bob Rubin, co-counsel for Travis McMichael, floated an alternative to English’s report, according to the AJC. “We have substantial evidence on that particular day Mr. Arbery was not a jogger. He was there for nefarious purposes,” Rubin said. The judge ruled, however, that Arbery’s character will not be considered at the bond hearing, the AJC reported.

“I’ve got a feeling as we go into the evidence today there’s gonna be a bunch of artillery thrown back and forth on a bunch of touchy subjects, things that can inflame,” Superior Court Judge Timothy Walmsley said in court Thursday. He wasn’t wrong.

RELATED: Questions abound for the man whose leaked video resulted in the arrest of Ahmaud Arbery’s murderers

RELATED: ‘It was a lynching’: Ex-Georgia cop and son accused of tracking down and killing Black jogger