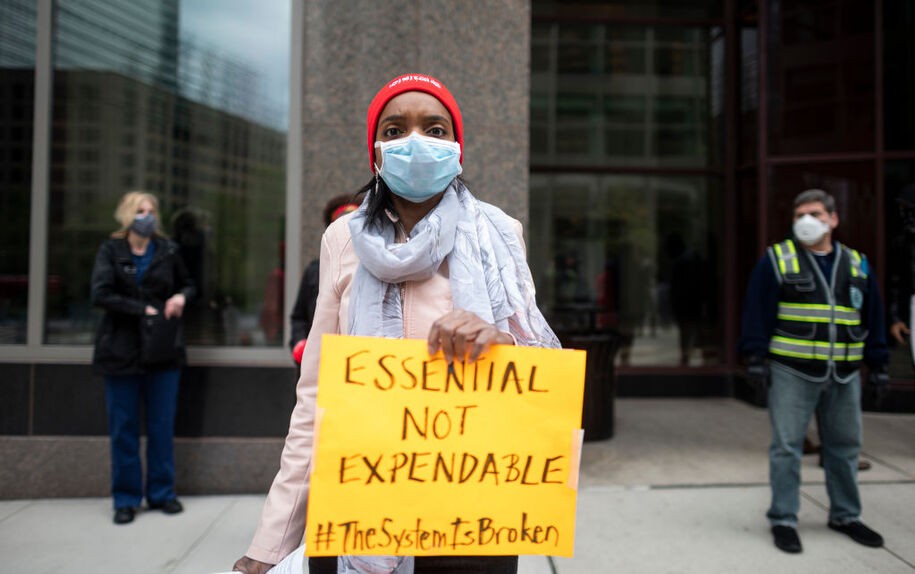 Caroline Chen at ProPublica writes—The Enraging Déjà Vu of a Third Coronavirus Wave. Health care workers don’t need patronizing praise. They need resources, federal support, and for us to stay healthy and out of their hospitals. In many cases, none of that is happening:

As a health reporter covering the pandemic, I’ve experienced too many moments of deja vu. This summer, as the virus swept through the South, news footage of overwhelmed hospitals in Houston turning away ambulances recalled similar scenes from March and April in New York City. Now, we’re in the so-called third wave of the pandemic, with the virus slamming into Midwestern states, and this week, Dr. Gregory Schmidt, associate chief medical officer at the University of Iowa Hospitals and Clinics, said his colleagues are converting 16 hospital beds into new ICU beds in anticipation of an influx of COVID-19 patients. “People in leadership are starting to say things in meetings like, ‘I have a sense of impending doom.’”

I’m exhausted and infuriated to be doing the same interviews and hearing the same stories for a third time. Why haven’t we learned? What have we been doing between March and November?

Why is Dr. Peter Wentzel, in Grafton, West Virginia, only now able to order a point-of-care test system for his community clinic, just to be told that the cartridges for it will arrive in December at the earliest? Why are clinicians at Mountain Family Health Centers in Glenwood Springs, Colorado, once again facing seven- to 10-day wait times for their patients’ test results?

At Daily Kos on this date in 2003—Army fires gay Arab linguists:

How can the US make any credible claims that it is fighting the terrorist threat with all available means when this sort of crap happens?

Nine Army linguists, including six trained to speak Arabic, have been dismissed from the military because they are gay.

The soldiers’ dismissals come at a time when the military is facing a critical shortage of translators and interpreters for the war on terrorism.

The government has aggressively recruited Arabic speakers since the Sept. 11 attacks.

“We face a drastic shortage of linguists, and the direct impact of Arabic speakers is a particular problem,” said Donald R. Hamilton, who documented the need for more linguists in a report to Congress as part of the National Commission on Terrorism.