Abbreviated Pundit Roundup: The pandemic doesn’t care about your politics 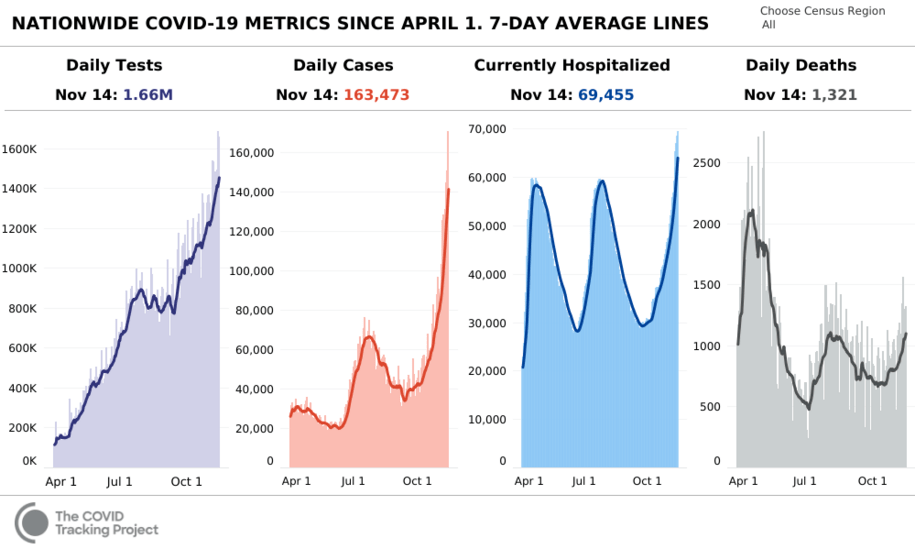 President Donald Trump‘s former national security adviser urged Republican Party leaders Sunday to acknowledge and explain the presidential election result to their supporters rather than continuing to appease the president as he promotes baseless claims of voter fraud.

“I think as every day goes by, it’s clearer and clearer there isn’t any evidence,” John Bolton said on ABC’s “This Week,” dismissing Trump’s claim that President-elect Joe Biden’s victory is illegitimate. “But if the Republican voters are only hearing Donald Trump’s misrepresentations, it’s not surprising that they believe it.”

they are reporting Biden won, because he did 🧐🧑‍🎓 https://t.co/KFY9ofDm2n

Moderna announces its vaccine works and joins Pfizer a ready to launch:

Now there are two. Another stunning mRNA vaccine result, from Moderna. Caveat: it’s science by press release again. @sciencecohen has the details: https://t.co/E53yKEPULa

Infection vs disease prevention?
Length of immunity?
Still questions amidst the great news.

Dr. Fauci tells @SavannahGuthrie he expects there will be actual doses available “by the end of December” for more vulnerable people. Also anticipates what we’ve been reporting: there will be multiple vaccines. “Going in the very strong right direction.” @TODAYshow https://t.co/0pQK7UR6rH

By the way you can stop Biden from meeting with Anthony Fauci, but not the manufacturers:

President-elect Joe Biden’s scientific advisers plan to meet with vaccine makers in the coming days. The stalled transition from President Donald Trump has kept Biden’s team out of the loop on government plans to inoculate Americans against COVID-19. https://t.co/CpRIfCowjv

When the first election returns started coming in from Texas’ Zapata County — a hot, dusty corner of the Rio Grande Valley with oil rigs and a large Latine population — some online voting-fraud sleuths thought there’d been a voting machine glitch, or worse. How could a county that had voted nearly 2-1 for Barack Obama and Hillary Clinton show President Trump narrowly ahead?

The reality is that baffled, faraway Twitter posters and their assumptions about Texas’ Hispanic vote hadn’t encountered actual voters like 72-year-old retired social worker and teacher Maria Elia Ramos of Rio Grande City, who shrugged off Trump’s xenophobic and sometimes racist rhetoric as well as hectoring family members on Facebook to vote for the GOP. “We have a right to decide,” she told the Los Angeles Times. “Our family values are more in line with Republicans.”

Zapata County’s centrist Democratic longtime congressman, Henry Cuellar, told the Texas Tribune that the heavily Latine region is “homogenous, deeply religious, pensively patriotic, socially conservative, and it’s hurting economically.” Indeed, for these mostly working-class voters it was arguably “the economy, stupid.” They feared some of the national Democratic rhetoric on the oil industry and the U.S. Border Patrol — two big sources of jobs — while many took special notice of Trump’s name on this summer’s $1,200 federal stimulus check.

I don’t 100 percent agree — a lot of debt held by people of color, 1st gen to attend college, etc. But I do think current progressive ideas could exacerbate the college/non-college fault line in America. Opportunities must be expanded to the half now shut out or left behind https://t.co/VY1eT060Bc

Organized labor believes it has a friend coming to the White House. Here’s what’s on the agenda.

After a strained relationship with Barack Obama’s White House and a sometimes downright hostile one with President Donald Trump’s, organized labor turned out to help elect Biden and is now pinning their hopes on his incoming administration to help them fight the long-running decline in union membership and influence.

Richard Trumka, the president of the AFL-CIO, the massive federation of unions that represent more than 14 million workers, said Biden’s resurrection of the blue wall in the industrial Midwest was “union made.”

“We delivered,” Trumka told NBC News. “He said he’s going to be the most pro-worker president we’ve ever seen, and I absolutely believe him.”

And union leaders like Trumka, many of whom have known Biden for decades, view him as one of their own.

There have been a lot of euphemisms used over the last four years to explain why voters support Trump, but this—in today’s WaPo—might be my favorite. https://t.co/TAlA6Z0cW3 pic.twitter.com/fixQFImP3J

Trump’s followers may thrill to the promise of trade wars and border walls, but what excites them even more is his gleeful transgression. They do not embrace him in spite of the schoolyard insults, Twitter tantrums and conspiracy nonsense, but because of these things, which represent weapons in a fight to liberate public life from the straitjacket of respectability as defined by Twitter’s Jack Dorsey, the dean of students and the human resources department.

Biden managed the debates over China, trade, and international supply lines, by seizing on the openings provided by Trump’s epic failures on all those fronts. The Covid debate, in a surprise that still hasn’t been fully appreciated, created those openings. 2/

After a summer of protest, Americans voted for policing and criminal justice reform

With a wave of votes across the country, Americans backed a string of measures increasing police oversight, elected reform-minded prosecutors, loosened drug laws and passed other proposals rethinking key elements of law enforcement and justice in their communities.

These votes, taken together, signal that after a summer of protest brought renewed scrutiny to the justice system, many Americans were open to rethinking how it functions — particularly on the state and local level, where policies have a stark impact on how people interact with the justice system.

“It was a pretty good day for meaningful change in criminal justice reform,” said Ronald Wright, a law professor at Wake Forest University and a criminal justice expert. “The priorities I was watching didn’t win everywhere, but they won a lot more than they lost.”

The idea (justice reform) is a winner. The slogan (defund the police) is a loser.

Again: by far the main influence was massive GOP turnout vs. 2018. Wins in reddish districts then hard to repeat. Also many indies (and some GOPers) wanted to vote against Trump but still reject Dems. https://t.co/DEJz67MrWA

White evangelicals are only 15 percent of the population, but their share of the electorate was 28 percent, according to Edison Research exit polling, and 23 percent, according to the Associated Press version. Though exit polls are imprecise, it seems clear that White evangelicals maintained the roughly 26 percent proportion of the electorate they’ve occupied since 2008, even though their proportion of the population has steadily shrunk from 21 percent in 2008.

And how Biden won 1600….. pic.twitter.com/zMiFfAeipe

This Coronavirus Surge Does Not Have to Be So Horrific

America is entering a difficult period. But the outcome is not foregone.

In the spring, when the coronavirus was spreading across the planet, Americans took steps — slow and uneven as they might have been — to bring the first U.S. outbreaks under control. Houses of worship and nonessential businesses closed. People resigned themselves to wearing masks in public. They worked from home if they could, to reduce the risk to those who could not.

The federal government deployed resources to help people stay home. Major league sports suspended games. Broadway suspended plays. Families suspended vacations. Schools closed. Nursing homes and hospitals banned visitors. It was painful, and in some cases devastating — and it was still not enough to stamp out the virus in America.

Case counts came down in places where they had been up, like New York City and Seattle. Surges that followed in early summer were beaten back, if not wholly quelled. In time, even nursing homes saw some decline in cases. While the economy tumbled grievously, the bottom did not fall out. Newly expanded unemployment benefits, combined with some $500 billion in federal aid, enabled small businesses to close or reduce their payrolls without setting off a surge in poverty rates. Easy credit for big businesses and stimulus checks for nearly everyone else also helped.

Much more could and should have been done. An egregious lack of national leadership gave the virus too consistent an edge, and far too many lives and livelihoods were still lost as a result. But for all those avoidable losses, we also gained crucial understanding of how this virus works, and of how it might be defeated.

Here’s a thing I want everyone to understand. There is a roughly 12-day lag between rising cases rising hospitalizations. So the 1.5 million (!!!) confirmed cases from the last 2 weeks have not yet factored into stories about packed emergency rooms. https://t.co/JID98tWjbt pic.twitter.com/3DNeiX2esb

‘No One Is Listening to Us’

More people than ever are hospitalized with COVID-19. Health-care workers can’t go on like this.

Emergency rooms are starting to fill again with COVID-19 patients. Utah, where Nathan Hatton is a pulmonary specialist at the University of Utah Hospital, is currently reporting 2,500 confirmed cases a day, roughly four times its summer peak. Hatton says that his intensive-care unit is housing twice as many patients as it normally does. His shifts usually last 12 to 24 hours, but can stretch to 36. “There are times I’ll come in in the morning, see patients, work that night, work all the next day, and then go home,” he told me. I asked him how many such shifts he has had to do. “Too many,” he said.

Emergency rooms are starting to fill again with COVID-19 patients. Utah, where Nathan Hatton is a pulmonary specialist at the University of Utah Hospital, is currently reporting 2,500 confirmed cases a day, roughly four times its summer peak. Hatton says that his intensive-care unit is housing twice as many patients as it normally does. His shifts usually last 12 to 24 hours, but can stretch to 36. “There are times I’ll come in in the morning, see patients, work that night, work all the next day, and then go home,” he told me. I asked him how many such shifts he has had to do. “Too many,” he said.

Going to ruin the USA. All while gasping for breath on 100% Vapotherm. They tell you there must be another reason they are sick. They call you names and ask why you have to wear all that “stuff” because they don’t have COViD because it’s not real. Yes. This really happens. And

Which is what I will do for the next three nights. But tonight. It’s me and Cliff and Oreo ice cream. And how ironic I have on my “home” Hoodie. The South Dakota I love seems far away right now. pic.twitter.com/3e5Qg4yAuS