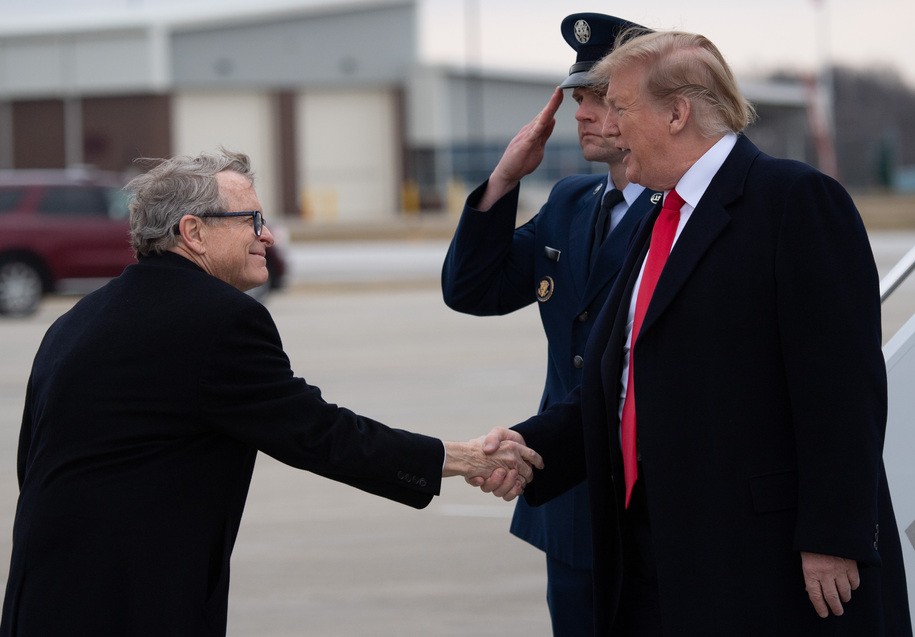 ● OH-Gov: Ohio politicos have been speculating for over a year that Gov. Mike DeWine could face a 2022 Republican primary challenge from the right from former Rep. Jim Renacci, and the talk only intensified on Monday when Donald Trump tweeted, “Who will be running for Governor of the Great State of Ohio? Will be hotly contested!”

Trump didn’t mention Renacci, who failed to unseat Democratic Sen. Sherrod Brown in 2018, or say why he was shunning DeWine. The governor, though, notably broke ranks with the White House on Saturday when he acknowledged reality and said that Joe Biden had won the presidential race.

While DeWine, who served as Trump’s state co-chair, added, “The White House, or the president and his campaign, has every right to go into court” and challenge the results, his admission that “Joe Biden is the president-elect” was not what Trump wanted to hear. Indeed, Media Matters’ Matthew Gertz noted that Trump’s tweet came just 39 minutes after Fox had aired a clip of DeWine’s comment.

Renacci’s beef with DeWine, whom he spent months running against in the 2018 gubernatorial primary before he switched to the Senate race, goes back much further than the aftermath of the 2020 election, though. Back in September of last year, Renacci argued that the state had seen little private-sector job growth during DeWine’s first six months in office, and the former congressman notably declined to rule out a primary bid. Renacci has also spent his 2020 attacking DeWine’s measures to combat the coronavirus pandemic, with him writing last month that the state was “committing economic suicide” under its current leadership.

Renacci also used his weekend to trash DeWine on Twitter for recognizing the results of the election and for considering new restrictions on restaurants and bars as COVID-19 cases rise, and he called for voters to “Ditch DeWine.” However, Renacci wouldn’t say if he was considering taking on the governor himself, though he did add, “It’s always the right for citizens to primary or run for office if they believe change is necessary.”

Ohio has become a rough state for Democrats over the last few years, but Renacci could give Team Blue more of an opening if he managed to take the nomination from DeWine. Renacci ran a weak campaign against Brown in 2018, and national Republicans never bothered to spend much money to aid him.

Renacci also pissed off his party by loaning his campaign $4 million but never spending most of it (almost $3.5 million in loans were repaid to the candidate after the campaign was over), and he managed to attract unhelpful headlines like, “Jim Renacci failed to pay strip club owner for governor campaign flights.” Brown ended up winning 53-47, even as DeWine prevailed 50-47 and the GOP swept every other partisan statewide race that same evening.

● GA-Sen-A, GA-Sen-B: Republican Sen. David Perdue recently launched his first TV spot of the Jan. 5 runoff, which ties Democrat Jon Ossoff to House Speaker Nancy Pelosi and Senate Minority Leader Chuck Schumer. The commercial shows a clip of Schumer saying, “Now we take Georgia, then we change America,” footage that conservatives have already made plenty of use of.

Ossoff, meanwhile, is connecting Perdue to Donald Trump, who is the first Republican presidential nominee to lose Georgia since George H.W. Bush in 1992, in the Democrat’s second runoff spot. The ad, which is similar to one that ran in the first round of voting, features audio of both Trump and Perdue using almost identical language to downplay the coronavirus as a chart shows its death toll skyrocketing.

Meanwhile in the special election, Democrat Raphael Warnock is out with two new spots against appointed GOP incumbent Kelly Loeffler. One ad slams the stock transactions made in Loeffler’s name before the stock market crashed in March, while Warnock uses the other commercial to push back on the senator’s attacks against him.

Warnock says in the latter piece, “I believe that in the greatest nation in the world, people should have affordable healthcare. That Georgians who work hard every day deserve a livable wage, and that seniors ought to be able to afford the costs of prescription drugs.” He concludes, “Kelly Loeffler may think that’s radical, I think it’s common sense.”

● MO-Sen: Republican incumbent Roy Blunt’s team recently confirmed that he would seek a third term in 2022, and there’s no obvious Democratic opponent on the horizon. Abe Rakov, a longtime aide to 2016 nominee Jason Kander, told the Kansas City Star over the weekend that Kander would not seek a rematch in two years.

● NH-Sen, NH-Gov: Former Republican Sen. Kelly Ayotte did not rule out seeking a rematch with Democratic incumbent Maggie Hassan when she was asked about the idea on Friday. Ayotte, who sits on the board of the conservative group Winning for Women, told Roll Call, “I’m very happy with what I’m doing right now. So I’m not focusing on running for office.” There has also been some speculation that Ayotte could run to succeed Gov. Chris Sununu if he takes on Hassan instead.

● VA-Gov: Former Democratic Gov. Terry McAuliffe has been talking about running for his old job next year for a while, and Axios reported on Sunday that he’s told friends that he plans to go for it “in the coming weeks.” McAuliffe has not yet said anything publicly about his 2021 plans, though his spokesperson confirmed last week that the former governor would not be seeking any posts in the Biden administration.

The Democratic field already consists of Lt. Gov. Justin Fairfax, state Sen. Jennifer McClellan, and Del. Jennifer Carroll Foy, and another potential candidate is also expressing interest in seeking the nomination. Reporter Brandon Jarvis tweeted on Saturday that Del. Lee Carter, a self-described socialist, “believes there is a path to victory for him and he is strongly considering running.” Carter soon replied with a GIF of The Office’s Dwight Schrute captioned, “It’s True.” (Yes, we do indeed live in a world where politicians communicate their interest in higher office through GIFs.)

● MS-04: On Thursday, Republican Rep. Steven Palazzo’s campaign said that he was under investigation by the Office of Congressional Ethics for allegedly misusing nearly $200,000 in campaign funds. Palazzo’s treasurer argued that the congressman had done nothing wrong, and added, “I think in the final analysis, it’s going to be a disgruntled employee and a sore loser that is driving this thing.”

The probe stems from a March complaint from the nonpartisan Campaign Legal Center, which accused the congressman’s campaign of spending $60,000 in rent in 2018 and 2019 for a Palazzo-owned farm they did not ultimately use; CLC also said that the campaign paid more than three times as much rent per month during this time than the state’s other three congressmen combined. As Roll Call‘s Chris Marquette explains, “House rules allow members of Congress to lease property to their campaigns if there is a bona fide campaign need for the space and specify that the campaign cannot pay more than fair market value.”

The CLC also said that Palazzo’s campaign paid $128,000 since he took office in 2011 to an accounting firm run by his now-former wife, who is not a certified public accountant; the couple divorced in 2016, but the campaign continued to make the payments. Marquette writes, “If a family member wants to sell services to a lawmaker’s campaign, there needs to be a bona fide campaign rationale for it and it cannot be more than fair market value, according to federal law and House rules.”

● AK State Senate: While Alaska Republicans maintained their 13-7 majority in the state Senate, Democrats are hoping that GOP infighting will give them a chance to form a governing coalition. The baker’s dozen of Republicans met on Friday but failed to decide on a new Senate president, though the members said they were still confident they’d be able to work out an agreement for an all-GOP ruling majority.

A handful of major races remain uncalled, and Daily Kos Elections is tracking them here.

● CA-39: The AP called this contest on Friday for Republican Young Kim, who defeated freshman Democratic Rep. Gil Cisneros in their rematch from two years ago.

● AK Ballot: The Associated Press has called a defeat for Measure 1, which would have increased the state’s fuel production tax; the referendum lost 58-42.

● Deaths: Former Iowa Sen. Roger Jepsen, a Republican who won his only term in a big 1978 upset, died Friday at the age of 91. Jepsen, who was a former lieutenant governor, took on freshman Democratic Sen. Dick Clark during Jimmy Carter’s midterm year, and he looked like the underdog during the entire campaign. The New York Times notably called Jepsen “a rather plodding campaigner with a tendency to get tangled up in positions that he repeatedly had to clarify or back away from,” while it said Clark had “reputation for being both articulate and tireless on the hustings.”

National Right to Life, though, made Clark its top national target, and it found a willing ally in the anti-abortion challenger. Jepsen ended up defying the polls and winning 51-48, a result that was attributed to his performance among anti-abortion Catholic voters who had yet to fully align themselves with the Republican Party. Clark’s campaign manager afterwards blamed his defeat on the 300,000 pamphlets that were circulated in churches by anti-abortion forces the Sunday before the election.

Six years later, though, Jepsen faced a tougher contest from five-term Rep. Tom Harkin. The Democrat began the 1984 contest with a wide lead over Jepsen at a time when the economy, especially in farming areas, was suffering. However, the race turned very close and ugly, and the lead would shift multiple times.

Harkin, notably, went after Jepsen after the news broke that he’d joined a spa in 1977 that listed “nude modeling, nude encounters and nude rap sessions” as offerings; the spa was shuttered three months after Jepsen joined it after authorities raided it for prostitution. Jepsen defended himself by saying that he’d ventured there once out of “curiosity and weakness” and never went back.

Harkin took a decisive lead in the polls late in the campaign, and despite Jepsen’s attempts to once again use abortion as a wedge issue, the Democrat didn’t lose his advantage. Ronald Regan ended up carrying Iowa by a 53-46 margin during his 49 state landslide, but Harkin’s strong showing in farming areas that were still struggling helped propel him to a 55-44 win. Reagan appointed Jepsen afterwards to the National Credit Union Administration, but the former senator never sought office again.