This week on The Brief: Trump fights the transition, all eyes on Georgia, youth activism 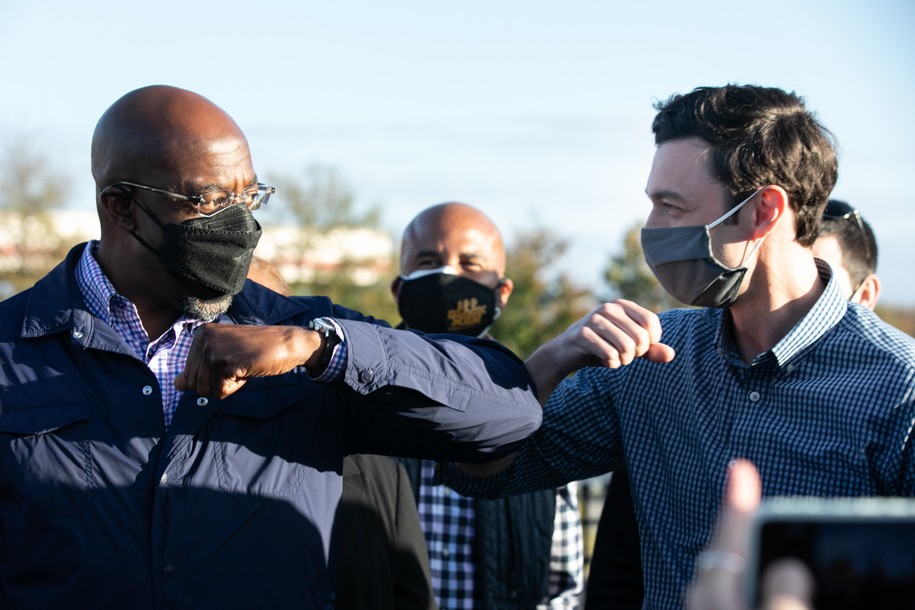 This week on The Brief, hosts Markos Moulitsas and Kerry Eleveld took a deep dive into everything that’s happened in the past week, with a focus on lessons learned from Georgia and how Democrats can focus their efforts more efficiently—especially with grassroots groups in key states. This week’s guests were Daily Kos Senior Campaigns Director Monique Teal and Cara Zelaya, Daily Kos Social Media Coordinator. Monique joined to discuss all the work the Daily Kos activism department does to build the progressive left, and Cara delved into the dramatic effect of the youth vote this election cycle and how those efforts have helped build more momentum for youth-led activist movements.

Markos and Kerry opened up the show by talking about the presidential transition and how Trump’s refusal to acknowledge his loss and assist the Biden team is imperiling our democracy. Markos thinks that “unity” talking points just aren’t effective when Republicans have shown such clear willingness to undermine any attempts at bipartisanship. When working with a “Putin-like autocrat populist,” Markos wondered, “can this country survive, can its democratic institutions survive, unless we reinforce them in the next several years?”

Kerry mentioned that we couldn’t forget about the Senate—as that’s where our hope lies. As she said:

Control of the Senate … [would mean we can] put some limitations on what the Executive Branch can do. Senate Republicans—if they hold the majority—might not be into that … during the Biden Administration … So I think that one thing House Democrats can do is, they can investigate the improprieties, the things that they’ve done. They must do some investigations.

Monique joined for the first segment to speak with Markos and Kerry about her work on the Activism team here at Daily Kos, touching specifically on what she’s seen and learned from working with organizers in Georgia. She believes that the creativity of Georgia coalitions was what really determined the outcome of the election. In the last few years, many of these groups have made inroads into new communities and developed groundbreaking new outreach and engagement strategies as demographics in the state continue rapidly shifting.

Daily Kos readers were heavily involved in this work, as well. Our community contributed over $1 million to Jon Ossoff’s and Raphael Warnock’s runoff races just since Nov. 3. As Monique explained, this enthusiasm goes beyond financial support from our community; more than 100,000 Daily Kos readers volunteered in some capacity this cycle, and about a quarter of them volunteered in Georgia. Our readers invested in stopping voter suppression in a number of states, and they are always fired up to fight and save our democracy through action. Monique believes that “activism is really about following the energy of the folks who are already doing the work” and that Georgia is one of the most organized states she has ever worked in, where everyone is really good at working together, and there are no silos.

In Georgia, Monique said, strategy had to take into account ways to organize around Republican leadership that might push back on these efforts at the state or local level:

This year, with COVID, they really saw what state-sanctioned violence really looks like when the president abandoned them, when their governor abandoned them, when the Senate abandoned them, and really Georgians had to take care of themselves because the all of these Republican elected officials weren’t going to do it. And one of the big things that came out of that was organizations like the New Georgia Project, they were reaching out into Southwest Georgia, which is overwhelmingly rural—it’s also very, very Black—and they found out that hospitals weren’t open down there, so folks didn’t have access to testing and whatnot. So an organization that was built out of voter registration became an organization that did also just direct service, making sure people had access to their most basic needs because the government had failed them so much. So this multiracial, multigenerational coalition is really a coalition that is ready to move forward into something better. They recognized that this isn’t working, so they showed up for themselves and their communities.

Markos mentioned his desire for this type of activism to be replicated elsewhere, noting his observation about a Democratic Party blind spot when it comes to these groups. Many of these local organizations are often overlooked and don’t receive as many donations as larger, more well-known groups headquartered in Washington, D.C. He cited TV ads as a specific example of the way money was spent that could have probably been better put to use with groups doing outreach on the ground: “Hundreds of thousands of dollars were spent … that did not move the needle. It did not matter. These ads did not move [public opinion]. … I am just making a note to myself to really shift my thinking to focus on more of these organizations.”

For the second half of the episode, Cara discussed the youth vote with Markos and Kerry and the major role young people played in determining the outcome of this election—particularly in Georgia. Young voters across the country are fired up about climate change, student debt, and Black Lives Matter, and they are making their votes count on these issues. On student debt in particular, Cara noted how important an issue it was for so many young voters and the larger effects it has on access to education and critical thinking skills in this country:

It’s an economic problem. I can’t believe that we live in a country where we have the most educated generation of all time, and we’re like, ‘You know what would be great? Economically disenfranchising this generation,’ making sure that they’re just totally squished down by this economic burden … The price of education has just gotten out of control in this country. And I know a lot of people talk about how, ‘Well, you know, it was a choice.’ And I’m like , ‘Well, was it? Like, what choice did I have?’ If I didn’t go to college, what career was available for me? But beyond that … we all benefit from an educated populace. I think one of the main problems that we’ve seen in the last four years is massive disinformation and an inability to do basic critical thinking and research.

The trio also discussed the “Defund the Police” messaging. Kerry believes that the grassroots gets to shape the messaging for the Democratic Party and shouldn’t be viewed as the enemy, saying:

When I see this debate about, well, is ‘defund the police’ a bad thing to be talking about and whatever?, I just want to remind lawmakers and people in DC: You don’t tell the grassroots what they get to talk about. The grassroots decides what they get to talk about. You decide how you’re going to handle that—are you going to distance yourself from it in your race? But no one tells people when to go protest and when to not go protest, right? People decide to do that when they feel the energy for something, when they feel committed to an issue. And the grassroots decides when they’re going to go out and do something. The grassroots was energized by the inequities and this constant stream of Black men in particular, but also women and people of color being slaughtered in the streets for doing nothing, for going for a jog.

Cara thinks young people will stick around to help make more progress happen, such as defunding the police, especially through protest, emphasizing that “the very definition of protests is to get in the way and disrupt the system.”

You can watch the full episode below.