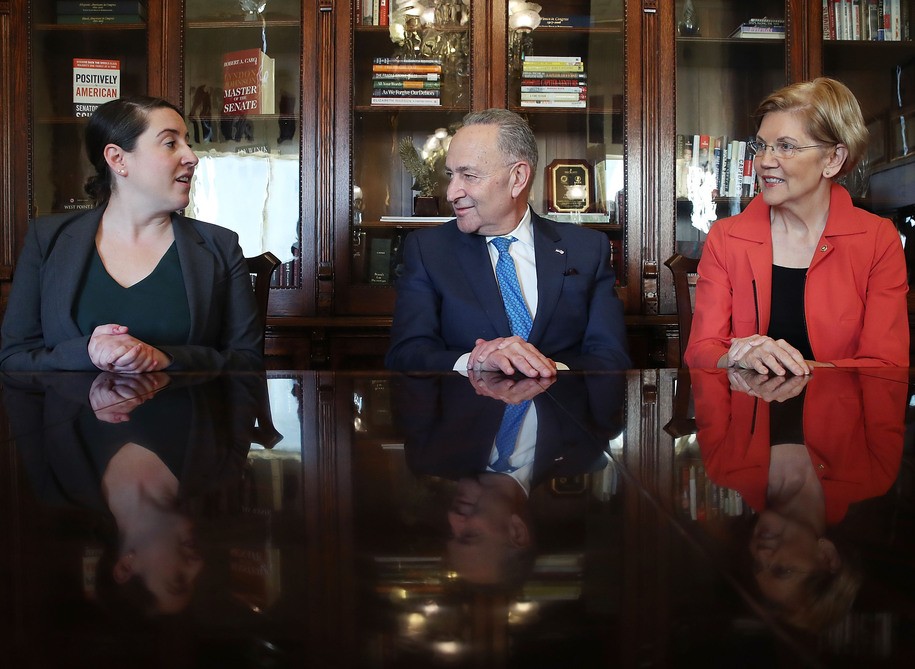 Even Wall Street has been celebrating the victory of President-elect Joe Biden with a Dow Jones average that’s up almost 2,500 points since Election Day. Part of that is the same relief that everyone else is feeling from being out from under the erratic what-the-hell-will-he-do-next policies of Donald Trump. Part of it is a level of comfort with Biden based on the idea that his policies won’t wander too far afield from what the markets saw in 2009-2016, a period when stock prices more than doubled as the nation dug out of the Great Republican Recession.

But on that second point, the market gurus might want to rethink just a bit. Because while the Democratic Party might not have actually selected Elizabeth Warren or another progressive who features in investment banker nightmares, the Agency Review Teams that Biden is putting together to oversee the Consumer Financial Protection Bureau, Council of Economic Advisers, Department of Commerce, Department of Labor, and Department of the Treasury all include some very Warren-like names. While not definitive, these selections are starting to look like an indicator that Biden’s policies on the economic side are going to be more progressive than the Wall Street gurus forecast.

There are over 500 people on the complete list of Biden’s review teams. Not all of these people will transition to roles within the agencies they’re supervising during the transition, but it’s a pretty good bet that a lot of those devoting the next two months to reviewing the current status of these agencies will be the same ones charged with translated Biden’s policies into action.

The list includes some names that are already generating some jitters in money land. That includes the first name on Biden’s team for handling the Federal Reserve, Banking and Securities Regulators: Gary Gensler. As CNN Business reports, Gensler was the “most aggressive” adviser in the Obama administration when it came to pushing for and enforcing the Dodd-Frank financial reform law. Gensler is particularly feared because he is a Wall Street insider, a former Goldman Sachs banker who knows where the bodies are buried and how the game is played. When he pushes for regulations, he knows where they’re really needed, and he knows the kind of dodges that the billionaire class can be expected to use when trying to dodge the law.

Also on that Federal Reserve team is Dennis Kelleher. When deregulation fans drove the whole economy into a ditch canyon in 2008, Kelleher responded by founding a nonprofit “focused on holding Wall Street accountable.” He has been extremely outspoken in his views that Wall Street was, and is, a predator that has “ripped off countless Main Street Americans.”

Biden also looks to be working to revive Warren’s brainchild, the Consumer Financial Protection Bureau (CFPB). He’s heading that team up with former Deputy Director Leandra English, who went down fighting against Trump and CFPB-hater Mick Mulvaney. English showed in 2017 that even with Trump in charge she could get her message out to the public, and she did an outstanding job of defending why CFPB existed and why it was still necessary.

None of this guarantees that Biden is going to take particularly Warren-esque action toward the markets and those who exploit them. But the presence of Gensler, Kelleher, English, and other prominent Wall Street critics makes this seem, as CNN notes, as if Biden is not planning to conduct business “from the Robert Rubin wing of the Democratic party.”

As with many other policies, Biden can take action to revive Dodd-Frank enforcements and restore power to the CFPB. But he can’t make solid progress in regulating the markets and providing some of the big changes that would help average Americans as long as Sen. Mitch McConnell has a stranglehold on the Senate.

Like everything else, the opportunity to make serious progressive change in economic policy is going to be heavily dependent on what happens next in Georgia.