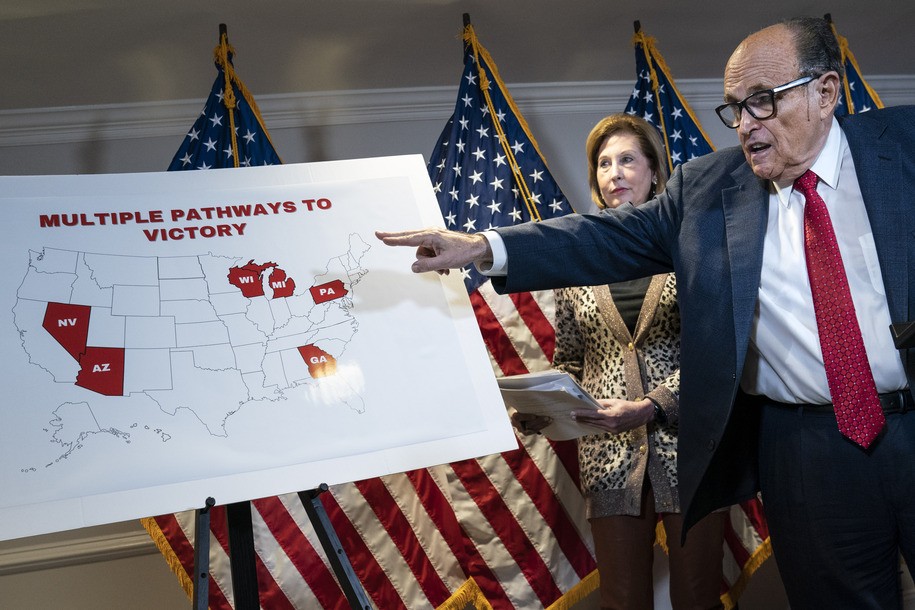 The Trump Administration’s attempts to overthrow the government and sow confusion around the elections have been going so badly that it has been difficult to take what is a very serious attack on our democracy seriously. On Thursday the Trump legal squad of cartoon-keystone-kops, Rudolph Giuliani, Sidney Powell, and Jenna Ellis held an almost two-hour press conference that can only be called bizarre. The three legal minds all share a detachment from reality and factual information that is prized within the Trump world.

Needless to say, the whole thing was a disaster like every hot garbage thing Donald Trump and friends have ever done. Well, now, Axios and Yahoo news’ White House correspondent Hunter Walker report that the Trump administration says that Sidney Powell isn’t on Trump’s legal team. Excuse me? I guess she just got to speak for 45 minutes and hit up Fox News and OANN to spew fact free conspiracy theories on his behalf, for free?

According to the statement: “Sidney Powell is practicing law on her own. She is not a member of the Trump Legal Team. She is also not a lawyer for the President in his personal capacity.” However, the other two lawyers, Giuliani and Ellis, are on his legal team. I guess Sidney was just hanging out?

I look forward to Mayor Giuliani spearheading the legal effort to defend OUR RIGHT to FREE and FAIR ELECTIONS! Rudy Giuliani, Joseph diGenova, Victoria Toensing, Sidney Powell, and Jenna Ellis, a truly great team, added to our other wonderful lawyers and representatives!

A public disavowal is generally not a sign that things are going well. pic.twitter.com/dK75Ix4RxP

But here’s the real take away.