Abbreviated Pundit Roundup: When the conspiracy comes home to roost 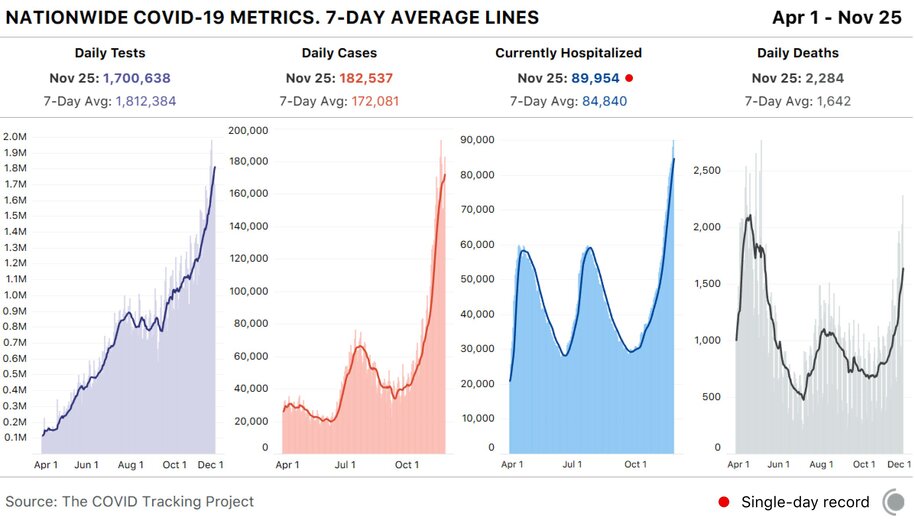 It’s hard to tell if the online chatter reflects wider voter sentiment, but some Republicans have expressed concern.

The swelling anger is not just emanating from everyday QAnon believers in the MAGAverse. It’s also coming from prominent lawyers working on Trump’s behalf, including Sidney Powell, who was briefly a lead attorney in Trump’s push to overturn the election.

The growing chorus has caught the attention of some of Trump’s top surrogates, who have scrambled to push back against the movement. “I’m seeing a lot of talk from people that are supposed to be on our side telling GOP voters not to go out & vote for @KLoeffler and @Perduesenate. That is NONSENSE. IGNORE those people,” implored Donald Trump Jr., the president’s son and typically a MAGA world leader, in a Monday tweet.

This may anger S. Dakota’s GOP Governor @KristiNoem. W. Virginia’s Gov saw our @CBSEveningNews report from S.D. & he told his people: based on how bad the COVID crisis is in S.D. he doesn’t want to be S.D. even though people are telling him: be like S.D.pic.twitter.com/OCfbEiMD5G

The justices issued six opinions, several of them unusually bitter, in upholding challenges from churches and synagogues to state pandemic restrictions on religious services.

On Wednesday, Justice Barrett dealt the chief justice a body blow. She cast the decisive vote in a 5-to-4 ruling that rejected restrictions on religious services in New York imposed by Gov. Andrew M. Cuomo to combat the coronavirus, shoving the chief justice into dissent with the court’s three remaining liberals. It was one of six opinions the court issued on Wednesday, spanning 33 pages and opening a window on a court in turmoil.

The ruling was at odds with earlier ones in cases from California and Nevada issued before Justice Ginsburg’s death in September. Those decisions upheld restrictions on church services by 5-to-4 votes, with Chief Justice Roberts in the majority. The New York decision said that Mr. Cuomo’s strict virus limits — capping attendance at religious services at 10 people in “red zones” where risk was highest, and at 25 in slightly less dangerous “orange zones” — violated the First Amendment’s protection of the free exercise of religion.

This is what replacing Ginsburg with Barrett looks like. https://t.co/HM01FcyoyV

The 2020 presidential race is turning into the zombie election that Trump just won’t let die. Despite dozens of legal and procedural setbacks, his campaign keeps filing new challenges that have little hope of succeeding and making fresh, unfounded claims of fraud.

But that’s the point. Trump’s strategy, his allies concede in private, wasn’t to change the outcome, but to create a host of phantom claims about the 2020 presidential race that would infect the nation with doubt and keep his base loyal, even though the winner — Biden — was clear and there has been no evidence of mass voter fraud.

“Zombies are dead people walking among the living — this litigation is the same thing,” said Franita Tolson, a professor at the University of Southern California Gould School of Law. “In terms of litigation that could change the election, all these cases are basically dead men walking.”

GOP effort to invalidate more than 2.5 million votes in Pennsylvania dealt another setback

Republicans faced another procedural setback in a Pennsylvania lawsuit seeking to invalidate more than 2.5 million votes, as a temporary order blocking further certification of election results was stayed on appeal from state officials who had already formalized President-elect Joe Biden’s win the day before.

Legal experts said the case had little chance of success, much like the other last-ditch GOP election lawsuits pending in battleground states. Republicans have gained no substantive traction across more than two dozen cases trying to undo results favoring Biden since Election Day, and as of Tuesday, four of six states where President Trump tried to overturn the outcome have certified Biden’s win.

In the Pennsylvania case, Republican plaintiffs are retroactively challenging the state’s mail-voting system, calling into question virtually every contest that took place there on Nov. 3 and asking for judges to take the unprecedented step of voiding election results across the state.

A take I feel like should be explored more: The Resistence was wildly successful. Started in 2017. Foreshadowed some of Dems 18-20 suburban strength. Helped push Dems to consistently oppose Trump. Motivated base turnout in 18 which gave key govships and state legislature seats

Miti Sathe and Will Levitt/Politico:

It Wasn’t Ideology That Sank House Democrats. It Was Bad Strategy.

Poor decisions from the national party left Democratic candidates in swing districts unable to hold their own.

It was weak strategy, based on bad polling information and poor decisions from the national party that left Democratic candidates in swing districts—and candidates of color in particular—unable to hold their own in the face of a massive, and massively underestimated, Republican voter surge. The fact is: If you’re going to win a campaign, you’ve got to campaign, which means getting in front of voters and meeting them where they are. And that was the one thing that Democrats running for Congress could not do this year, upon orders from the party’s campaign arm in Washington.

Micah Schwartzman, a professor at University of Virginia School of Law, said Barrett could end up furthering an understanding of the First Amendment he finds ‘quite disturbing.’

Elizabeth Reiner Platt, director of The Law, Rights and Religion Project at Columbia Law School, said there are “certainly” indications that Barrett will push the court toward a narrow understanding of religious liberty, one that is being espoused by conservative Christian legal groups.

Barrett has ties to the Alliance Defending Freedom, an organization that fought against same-sex marriage for years and in 2018 was part of the legal team that won the Supreme Court case for the owner of Colorado’s Masterpiece Cakeshop, who had refused to bake a cake for a same-sex couple for religious reasons. (ADF is listed as a hate group by the Southern Poverty Law Center, a characterization ADF disputes.)

Much of the media was playing along with that effort until Trump got impeached over it, covering it in amoral fashion as a political strategy story about Trump’s devious and effective fixer Rudy Giuliani, and his brilliant strategy for neutralizing hapless Joe Biden.

Sen. Perdue Insisted He Had No Input At All On Stock Buys. New Evidence Shows He Did.

A new report shows the Georgia senator reaching out directly to his investment adviser at Goldman Sachs directing him to make a massive stock sale.

Earlier this year, Sen. David Perdue (R-GA) personally directed his wealth adviser to sell off $1 million worth of stock in a financial company before its share price cratered, The New York Times reported on Wednesday—a finding that flies in the face of Perdue’s repeated insistence that he has no input whatsoever over his considerable investment portfolio.

The Georgia Republican’s history of trades has come under close scrutiny after he reported purchases and sales of stocks in companies that were likely to be affected by the pandemic. The most controversial of those sales came after closed-door Senate briefings about the spread of the coronavirus in January.