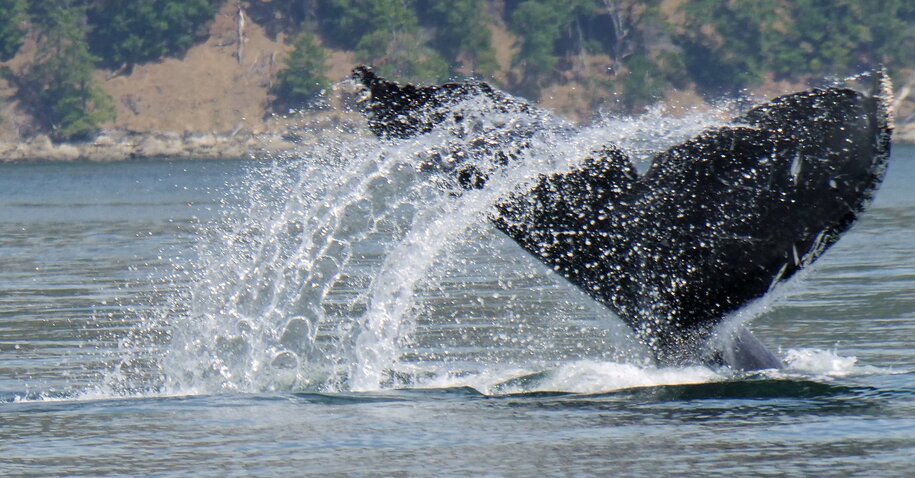 Four years ago this month, a trio of humpback whales—two adults and a juvenile, sex unknown—decided to spend several hours hanging out along the western side of Washington State’s San Juan Island and vocalizing. No one could see them because it was late at night and moonless. But underneath the surface, they put on a performance that lasted well over an hour—and it was being picked up on a hydrophone.

I was fortunate enough to log on to that hydrophone, which runs live on the internet 24/7 thanks to the fine folks at OrcaSound. (Another feed is available through SMRU Consulting.) I recorded the resulting musical symphony over the next hour and a half and posted it on Soundcloud.

I soon found that I could put this recording on while I worked and—after that first disconcerting trumpet-like sound—it actually became a relaxing piece of music and helped me focus. Of course I’m a whale-sound-loving weirdo and you may find it a completely strange experience, but perhaps you’ll agree.

This recording is unusual because most of the time when I’ve recorded humpbacks it’s been in Hawaii, when they are busily engaged in courtship and mating rituals, which is what scientists believe their songs are related to. Most of these recordings feature dozens of other humpback whales joining in on a chorus—and of course, one of the remarkable things about these whales is that they are all singing the same piece of music.

That’s not what happens in this recording. Instead, what we appear to be hearing is the two adults singing short phrases to the juvenile, who then responds with what seem to be much higher-pitched versions of the same vocalizations. In other words: We know that humpbacks somehow are able to pass along the knowledge of these songs to each other, and what we may be hearing is that process of cultural transmission taking place.

Regardless of the nature of what we’re hearing, there’s an ethereal beauty to it all that makes human music seem … primitive. Enjoy!

Here’s a recording of humpbacks singing as a chorus off the coast of Maui.