Abbreviated Pundit Roundup: As the pandemic gets ever more serious, the Trump WH gets ever less 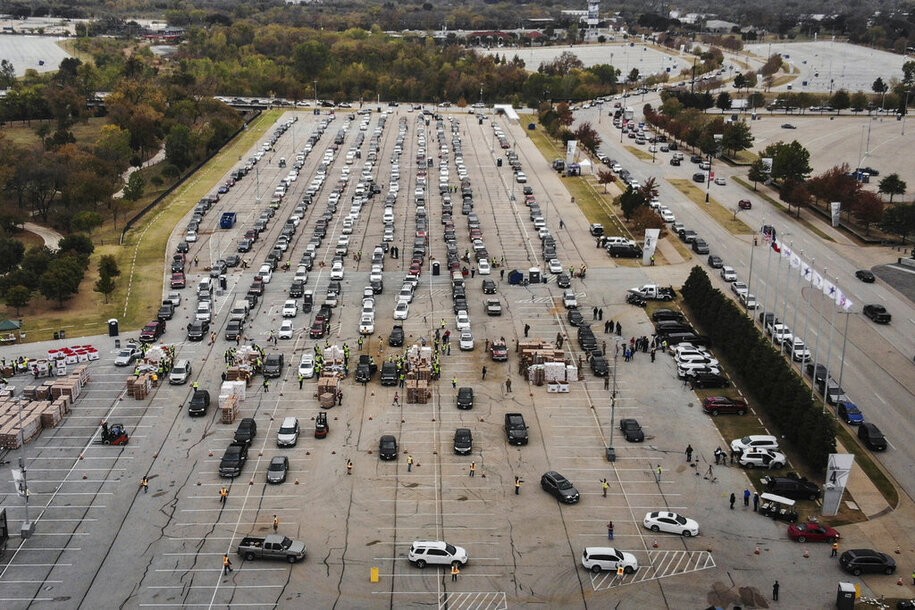 This Is How Biden Can Lead with Science

It starts with being mindful of your own priors.
None of this is meant to create a false equivalence with the scientific depredations of the Trump administration, which mismanaged this crisis in ways which stagger the mind.

And to his enormous credit, Joe Biden has exhibited laudably consistent behavior in his approach to COVID-19 risk, setting an example of personal conduct that his administration—all of America, actually—will do well to emulate.

But the responsibility of power is a double-edged sword. Democrats will now have a greater ability to take actions that help public health. But mistakes or hypocrisies—like those above—will be more damaging to public health. Which is why it’s important for the party to have a clear-eyed view of itself.

Fauci on US coronavirus cases: “What we expect, unfortunately, as we go for the next couple of weeks into December, that we might see a surge superimposed upon that surge that we’re already in.” pic.twitter.com/KlBiDPhbz3

America Failed at COVID-19, but the Economy’s Okay. Why?

The U.S. entered the coronavirus recession with a few structural advantages. Its success may not last for long.

The United States has been better not just in form but also in function, with regard to combatting the economic fallout of the pandemic. It has had best-of-class monetary policy: This spring, the Federal Reserve, the country’s most capable technocratic institution, calmed the financial markets with an alphabet soup of special programs while dropping interest rates to zero and flooding the markets with cash.

Yet Washington, improbably, has truly distinguished itself with fiscal policy, at least earlier in the year. The U.S. has fewer, stingier, more complicated, and more conditional safety nets available to people than many other advanced economies—less generous “automatic stabilizers,” in economic parlance. But when COVID-19 hit, congressional Democrats negotiated a series of enormous, highly effective temporary stabilizers with Republicans who were ready to go big, among them Treasury Secretary Steven Mnuchin. In the $2.2 trillion CARES Act, Congress provided forgivable loans to small businesses; sent $1,200 checks to most Americans; added gig workers to the unemployment-insurance system; and put a $600 weekly top-up on unemployment checks.

The latter is an important reason why the pandemic didn’t have a bigger impact on the election. Democrats need to do better messaging on how they helped. Instead it was  “Congress can’t pass anything” rather than “Republicans won’t”.

This description of Joe McCarthy in Fredrik Logevall’s JFK biography, when you take out the name McCarthy, is just…wow. pic.twitter.com/y9owEbgNfF

The nation, and the Democratic Party, desperately needs a replacement for the tired story that tax cuts drive economic growth.

One of the great successes of the Republican Party in recent decades is the relentless propagation of a simple formula for economic growth: tax cuts.

The formula doesn’t work, but that has not affected its popularity. In part, that’s because people like tax cuts. But it’s also because people like economic growth, and while the cult of tax cuts has attracted many critics, it lacks for obvious rivals.

This is not just a political problem for Democrats; it is an economic problem for the United States. The nation needs a better story about the drivers of economic growth, to marshal support for better public policies. The painful lessons of recent decades, along with recent economic research, point to a promising candidate: higher wages.

Before this month, had anyone seriously made the argument for the Electoral College that Trump allies make now: That it allows state legislators to toss out the popular vote and pick electors for their party’s candidate?

Covid Overload: U.S. Hospitals Are Running Out of Beds for Patients

As the coronavirus pandemic surges across the country, hospitals are facing a crisis-level shortage of beds and staff to provide adequate care for patients.

In excruciating pain with lesions on her face and scalp, Tracey Fine lay for 13 hours on a gurney in an emergency room hallway.

All around her, Covid-19 patients filled the beds of the hospital in Madison, Wis. Her nurse was so harried that she could not remember Ms. Fine’s condition, and the staff was slow to bring her pain medicine or food.

In a small rural hospital in Missouri, Shain Zundel’s severe headache turned out to be a brain abscess. His condition would typically have required an operation within a few hours, but he was forced to wait a day while doctors struggled to find a neurosurgeon and a bed — finally at a hospital 375 miles away in Iowa.

From New Mexico to Minnesota to Florida, hospitals are teeming with record numbers of Covid patients. Staff members at smaller hospitals have had to beg larger medical centers repeatedly to take one more, just one more patient, but many of the bigger hospitals have sharply limited the transfers they will accept, their own halls and wards overflowing.

Looks like the GOP strategy of “indulge the president’s wild voter fraud conspiracies to keep the base energized for the Georgia runoff” is poised to backfire spectacularly. https://t.co/kGvOh96CM3

The Logic of Pandemic Restrictions Is Falling Apart

This is why you can eat in a restaurant but can’t have Thanksgiving. ​​​

As weeks passed, my confidence began to slip. The number of daily new cases in NYC started to balloon, heightening the risk of transmission in any closed space, but Josh kept going to restaurants. Maybe he was misunderstanding something about the risk. Maybe he’d want to know. The next time he posted about COVID-19, I told him, as gently as I could, that if he was trying to stay safe, it would be a good idea to stop dining indoors.

My suspicions were correct. Because the state and city had reopened restaurants, Josh, who asked to be identified only by his first name to protect his privacy, assumed that local health officials had figured out a patchwork of precautions that would make indoor dining safe. He and his fiancé had even gone one extra step, making a Google Map of places they knew were being particularly strict with temperature checks. They were listening to the people they were told to listen to—New York Governor Andrew Cuomo recently released a book about how to control the pandemic—and following all the rules.

Josh was irritated, but not because of me. If indoor dining couldn’t be made safe, he wondered, why were people being encouraged to do it? Why were temperature checks being required if they actually weren’t useful? Why make rules that don’t keep people safe?

Across America, this type of honest confusion abounds. While a misinformation-gorged segment of the population rejects the expert consensus on virus safety outright, so many other people, like Josh, are trying to do everything right, but run afoul of science without realizing it. Often, safety protocols, of all things, are what’s misleading them. In the country’s new devastating wave of infections, a perilous gap exists between the realities of transmission and the rules implemented to prevent it. “When health authorities present one rule after another without clear, science-based substantiation, their advice ends up seeming arbitrary and capricious,” the science journalist Roxanne Khamsi recently wrote in Wired. “That erodes public trust and makes it harder to implement rules that do make sense.” Experts know what has to be done to keep people safe, but confusing policies and tangled messages from some of the country’s most celebrated local leaders are setting people up to die.

South Dakota Gov. Kristi Noem on @WNAX, about the record-breaking surge of new COVID-19 cases in the state: “I don’t think people should be alarmed. We’re where we expected to be.”https://t.co/ViVWSHSEUd

Just awful, from a government leader.

How ‘Dr. Annie’ is dividing the Flathead

When the commissioners in this county of about 104,000 people appointed Dr. Annie Bukacek to the health board in January, they might have known they were getting into a political hornet’s nest. “Dr. Annie,” as she’s known in the Flathead Valley, is a well-known and outspoken opponent of vaccinations.

Then, as the coronavirus spread into Montana and the crisis deepened here and across the country, she became a leading voice locally and in this politically purple state against government restrictions to curb its spread.

In a widely circulated video posted on social media, Bukacek cast doubt over official COVID-19 death tolls, saying medical professionals were pressured to attribute non-COVID deaths to the virus. In many communities, such as New York City, though, the deaths from the virus are now believed to have been initially undercounted. Many public health experts say historical comparisons show the counts nationwide are still underestimating the COVID-19 death toll.

THREAD: I just spent 3 days with frontline workers at hospitals in a part of Appalachia where hospitalizations have more than doubled in the last month. But hospital staff say many in their hard-hit communities still don’t believe COVID is real. Misinformation is rampant.

20 days of fantasy and failure: Inside Trump’s quest to overturn the election

However cleareyed Trump’s aides may have been about his loss to President-elect Joe Biden, many of them nonetheless indulged their boss and encouraged him to keep fighting with legal appeals. They were “happy to scratch his itch,” this adviser said. “If he thinks he won, it’s like, ‘Shh . . . we won’t tell him.’ ”

Trump campaign pollster John McLaughlin, for instance, discussed with Trump a poll he had conducted after the election that showed Trump with a positive approval rating, a plurality of the country who thought the media had been “unfair and biased against him” and a majority of voters who believed their lives were better than four years earlier, according to two people familiar with the conversation, who spoke on the condition of anonymity to discuss private conversations. As expected, Trump lapped it up.

When the state of Kansas issued a mask mandate, 81 counties opted out. Researchers found that coronavirus infection rates rose sharply in the opt-out counties — while falling in areas that required masks.https://t.co/UMLQzeBVAb

And from 2016, David Wong/Cracked with the best Trump voter explainer you will ever read:

How Half Of America Lost Its F**king Mind

I’m going to explain the Donald Trump phenomenon in three movies. And then some text.

There’s this universal shorthand that epic adventure movies use to tell the good guys from the bad. The good guys are simple folk from the countryside …

… while the bad guys are decadent assholes who live in the city and wear stupid clothes:

In Star Wars, Luke is a farm boy …

Trump is delusional about the result of the election. I’ve been cautious about using that word in particular, these past four years, but it’s the word that fits here. pic.twitter.com/a3uTUGK1nv