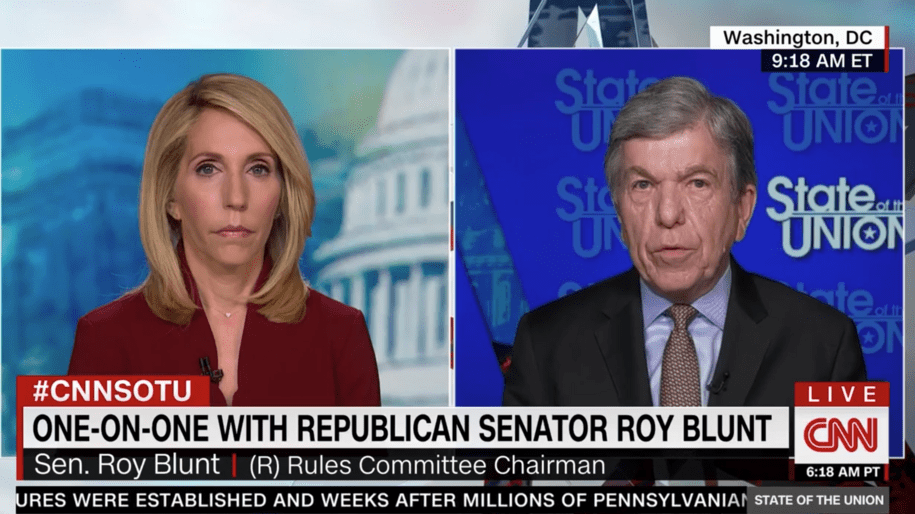 Republican Sen. Roy Blunt of Missouri is a coward. Sen. Blunt has a storied career of being absent from the job he reportedly has as a senator in the United States Congress. In a Senate run by arguably the least legislative senator ever, Mitch McConnell, Blunt stands out in his sheer cowardly laziness. This has made it considerably less surprising to watch Sen. Blunt, over the past couple of weeks, do the Republican anti-Democracy dance of first vaguely insinuating that there is voter fraud that rigged the national election, and then outright pushing the theory that the outcome of the election was in doubt. The best that can be said about Blunt is that he’s a good bellwether for telling you what talking points the Republican leadership has passed down to its underlings—or hasn’t. He’s a coward.

On Sunday, as the worm has turned and the almost forty cases Trump and his band of Keystone fascists have lost or had thrown out in court settles in, Blunt and friends went on the Sunday shows to tell America that they were still technically acting like democratically elected representatives. They also wanted to remind their base that our election system might need to be rigged more for the minority of Americans in the Republican Party. Especially if all of these Black and Asian and Latino people are going to come out and vote!

Host Dana Bash began by trying to see if Sen. Blunt might join the meager trickle of GOP officials recognizing that President-elect Joe Biden won the Nov. 3 election against one term white supremacist executive Donald Trump. Blunt began by not acknowledging that, but reporting that “well, we are certainly moving forward as if that what is going to happen on January the 20th.” He then attempted to soften the Trump administration’s withholding of the transition funds by remarking that it “is a relatively new thing in American government that the elected president would have to have government money to make their transition is available.”

Sen. Roy Blunt basically reported what has only recently begun to happen. Sen. Roy Blunt said nothing. He then went on to argue that the semantics of calling Biden the victor or the “President-elect” are all just words. In fact, “the president-elect technically has to be elected president by the electors and that happens in the middle of December and January 6th, I’m one of the four members of the congress that participates in the joint session that decides that those electoral votes are fully accepted and that is when this process is over when those votes are accepted and counted.”

Bash attempts to right this ship, explaining that the Republican Party, in pretending that there is any merit to the Trump administration’s attempts at a coup (sadly Bash like many traditional media faces, doesn’t simply call it an attempted coup-d’etat), the Republican Party is helping to undermine the faith the public has in the democratic process. This is one of the top things needed for a strong democracy to play out. Sen. Roy Blunt waxes Shakespeare again, asking what’s in a name like … president-elect. It is as this point that Bash should have asked Roy Blunt when he would stop calling Mitch McConnell and Donald Trump his dear leaders, but again, a bridge too far, I guess.

Blunt peppers his answers with vagaries like “there may have been ballots that shouldn’t have been cast,” and “I think there were things that could have been done differently and better to ensure there weren’t [sic] voter fraud.” At the same time he thinks that this was the most secure election ever. I assume you plug your nose before reading or watching Roy Blunt speak.

What Roy is packaging here is that the Republican Party needs to continues to suppress the votes of millions of Americans and they will need to find new ways to do this. Most importantly, Sen. Blunt wants to get out the misinformation that something in how the “signatures” on mail-in ballots are checked needs to be rigged better. Bash, to her credit, makes a point of debunking Blunt’s vague attempt to cast doubt on mail-in ballots, explaining that “there is no evidence that people didn’t see signatures. In fact, the state Supreme Court and now federal court have both thrown out the notion that that didn’t happen.”

The two move on to talk about COVID-19, where I’m sure Sen. Blunt will be equally vague and forthcoming about how great the Reublican party and its leadership has done in misinforming the public.