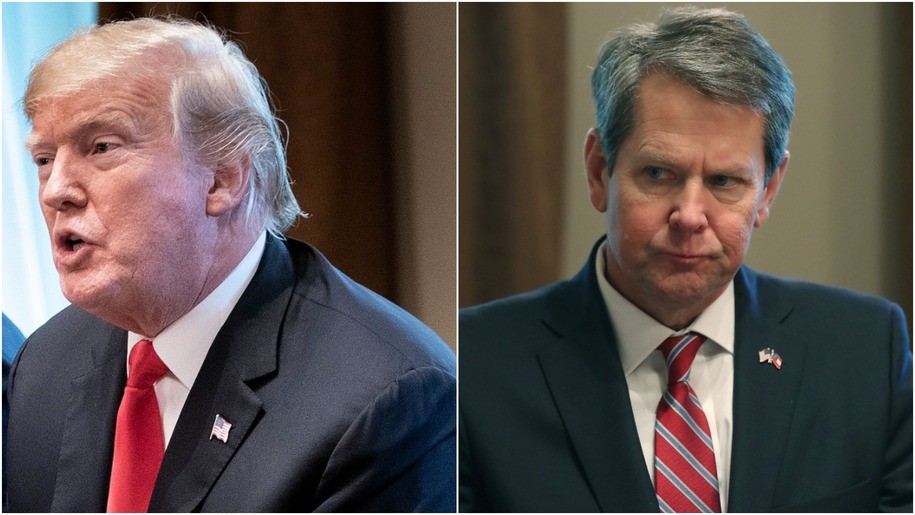 This has to be a low point for President Donald Trump. Georgia Gov. Brian Kemp—as in the one who thought it was OK to oversee an election he was competing in—had to educate the president on state law Monday in response to several of Trump’s requests of Kemp to break the law. “Why won’t Governor @BrianKempGA, the hapless Governor of Georgia, use his emergency powers, which can be easily done, to overrule his obstinate Secretary of State, and do a match of signatures on envelopes. It will be a ‘goldmine’ of fraud, and we will easily WIN the state….” the president tweeted.

Trump officially requested a recount on Nov. 20 that serves as the third of its kind in the state and follows Georgia election officials certifying President-elect Joe Biden as the winner of the presidential election. In both recounts, Trump lost by more than 12,000 votes. Only the president insists those recounts were invalid, and he’s been pushing for the state to match signatures on envelopes against those on ballots.

Cody Hall, Kemp’s communications director, explained in a statement that governors can’t just overturn election results. “Georgia law prohibits the Governor from interfering in elections. The Secretary of State, who is an elected constitutional officer, has oversight over elections that cannot be overridden by executive order,” Hall said in the emailed statement to Daily Kos. “As the Governor has said repeatedly, he will continue to follow the law and encourage the Secretary of State to take reasonable steps — including a sample audit of signatures — to restore trust and address serious issues that have been raised.”

No, the 2020 Election was a total scam, we won by a lot (and will hopefully turn over the fraudulent result), but we must get out and help David and Kelly, two GREAT people. Otherwise we are playing right into the hands of some very sick people. I will be in Georgia on Saturday! https://t.co/1ziqFq9S6O

Kemp also wasn’t the only Georgia Republican Trump turned on recently. Secretary of State Brad Raffensperger was also the subject of the president’s wrath on Fox News Sunday during Trump’s first televised interview since his election loss. “And they had electoral officials making deals like this character in Georgia who is a disaster. And the Governor’s done nothing,” Trump told host Maria Bartiromo. “He’s done absolutely nothing. I’m ashamed that I endorsed him.”

President Trump lashed out at Georgia @GovKemp and @GaSecofState for not intervening. “They had electoral officials making deals like this character in Georgia who is a disaster. And the Governor’s done nothing. He’s done absolutely nothing. I’m ashamed that I endorsed him.” pic.twitter.com/zKjjP4duLx

Raffensperger said even before Trump’s weekend rant that he felt the president threw him under the bus. “By all accounts, Georgia had a wildly successful and smooth election. We finally defeated voting lines and put behind us Fulton County’s now notorious reputation for disastrous elections,” Raffensperger wrote in a USA Today editorial published Wednesday. “This should be something for Georgians to celebrate, whether their favored presidential candidate won or lost.

“For those wondering, mine lost — my family voted for him, donated to him and are now being thrown under the bus by him.”

He said during a press conference Monday that “the truth matters” and the recount would be posted online after the Wednesday deadline. “There are those who are exploiting the emotions of many Trump supporters with fantastic claims, half-truths, misinformation. And, frankly, they are misleading the president as well, apparently,” Raffensperger said.

RELATED: Want to flip a state blue? Stacey Abrams drops major key, and she would know