Abbreviated Pundit Roundup: The pandemic set to ramp up after the Thanksgiving holiday 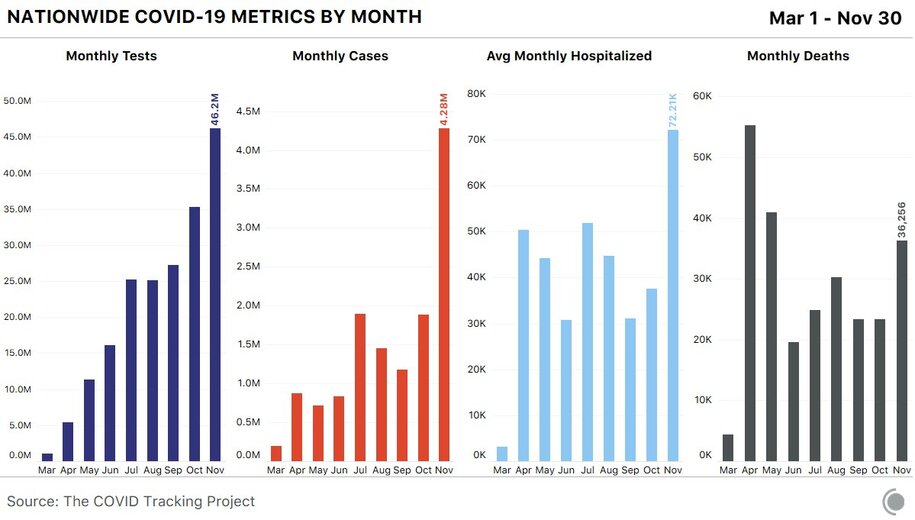 A spreading sickness, part I

Editor’s note: This is the last story in a three-part series about a group of friends infected by the coronavirus.

The symptoms surfaced when Joan Bauer tried to go for a walk outside and was winded after climbing a hill near her house.

She had traveled less than a block.

The next day Joan, 86, had a cough and felt ill and called a doctor, wondering if she might be infected by the coronavirus.

No, she was told. Joan had tested positive for the virus in June while she was recovering from a blood infection at a nursing home in Missouri Valley, and it was unlikely she had the disease again.

But just days before she began to feel ill, she had hosted a small gathering of friends to play euchre on a September afternoon, and the husband of one of them had become sick and tested positive after.

They had worn masks as they played cards, except for when they ate pie. Joan’s daughter Barb Rasmussen saw them without masks when she arrived to take Joan shopping for groceries and washed dishes while they finished.

She worried, but all of the friends had stayed home for months as the pandemic raged, and this was just a game of cards.

Almost nothing that the Trump team has alleged has withstood the slightest scrutiny. In particular, it’s hard to find much that is remotely true in the president’s Twitter feed these days. It is full of already-debunked claims and crackpot conspiracy theories about Dominion voting systems. Over the weekend, he repeated the charge that 1.8 million mail-in ballots in Pennsylvania were mailed out, yet 2.6 million were ultimately tallied. In a rather elementary error, this compares the number of mail-ballots requested in the primary to the number of ballots counted in the general. A straight apples-to-apples comparison finds that 1.8 million mail-in ballots were requested in the primary and 1.5 million returned, while 3.1 million ballots were requested in the general and 2.6 million returned.

Flawed and dishonest assertions like this pollute the public discourse and mislead good people who make the mistake of believing things said by the president of the United States.

“It. Has. All. Gone. Too. Far,” says @GabrielSterling with Georgia Sec of State after a Dominion tech’s life was threatened with a noose. “Mr. President, you have not condemned these actions or this language….all of you who have not said a damn word are complicit in this.” pic.twitter.com/OnHaxgpJx6

In case you thought DC Republicans weren’t lying weasels, this should help correct that, from Mark Becker/Bulwark:

My Call With Ron Johnson: He Knows Biden Won But Won’t Admit It

As expected – national data beginning to rebound after the holiday. This means we should expect to see higher reported deaths over the next week than at any point in the pandemic. Today’s was the 6th highest day yet recorded. https://t.co/2aVkWdYMZX

How Biden won: He built on Clinton’s successes

Yet Biden has won in a way that was perhaps surprising to some. He was the first candidate to win without taking at least Florida or Ohio since 1960. Biden did considerably worse with Hispanics than Hillary Clinton in municipalities throughout the country.

And Biden won the presidency even as President Donald Trump’s base largely stuck with him.

So how’d he do it? Biden’s pathway to victory intensified the gains Clinton made in 2016. In doing so, he became the seventh Democrat in eight times to win the popular vote, which is the first time since 1828 that one party won the popular vote that often in eight straight elections.

Looks like the GOP strategy of “indulge the president’s wild voter fraud conspiracies to keep the base energized for the Georgia runoff” is poised to backfire spectacularly. https://t.co/kGvOh96CM3

He stars in a new ad campaign as Republicans worry Trump’s voter fraud accusations will depress GOP turnout in the Senate runoffs.

The super PAC will air its ads only on conservative radio and TV stations to reach Trump loyalists. The organization is investing six figures to run the first ads on radio stations statewide, and later this week it will begin cutting TV and digital commercials with the younger Trump.

Senior Republicans are alarmed that Donald Trump’s accusations of widespread voter fraud in Georgia and elsewhere, which he has not substantiated, will have the unintended side effect of discouraging his voters from turning out in the runoffs.

The idea of a boycott has recently caught fire online, where Trump supporters have accused Georgia’s Republican senators up for election, Kelly Loeffler and David Perdue, of not doing enough to intervene in the state’s ballot counting. Hashtags like #CrookedKelly and #CrookedPerdue have begun to pop up on social media, and some Trump backers have called for voters to write in the president’s name.

Very bigly genius move to announce so early and let Republicans get tired of the schtick, instead of waiting in the wings until the last minute. https://t.co/OjTolZU1Vu

I’m the chair of the local Democratic Party in a Wisconsin county that Donald Trump won. It wasn’t for a lack of progressive organizing. It was because national Democrats have failed communities like mine.

Why did Trump do so well with rural voters? From my experience, it’s not because local Democrats failed to organize in rural areas. Instead, after conversations with dozens of voters, neighbors, friends and family members in Dunn County, I’ve come to believe it is because the national Democratic Party has not offered rural voters a clear vision that speaks to their lived experiences. The pain and struggle in my community is real, yet rural people do not feel it is taken seriously by the Democratic Party.

My fear is that Democrats will continue to blame rural voters for the red-sea electoral map and dismiss these voters as backward. But my hope is for Democrats to listen to and learn from the experiences of rural people.

The signs of desperation are everywhere in communities like mine. A landscape of collapsed barns and crumbling roads. Main Streets with empty storefronts. The distant stare of depression in your neighbor’s eyes. If you live here, it is impossible to ignore the depletion.

Filings don’t reveal timeline/names, except that comms between people including at least one lawyer were seized from an office raided sometime before the end of summer, per @kpolantz. No one appears to have been publicly charged w/ a related crime to date. https://t.co/KG2ObQ3eHd

Attorney-client communications are not privileged when there is discussion of a crime. Judge Howell: “The political strategy to obtain a presidential pardon was ‘parallel’ to and distinct from [redacted]’s role as an attorney-advocate for [redacted].” https://t.co/bgoO9V1vYp

Most Republicans Say They Doubt the Election. How Many Really Mean It?

Survey research tries to sort out the typical partisan reactions to a loss from an erosion of trust that may be more lasting.

Since the election, surveys have consistently found that about 70 percent to 80 percent of Republicans don’t buy the results. They don’t agree that Joe Biden won fair and square. They say the election was rigged. And they say enough fraud occurred to tip the outcome.

Those numbers sound alarmingly high, and they imply that the overwhelming majority of people in one political party in America doubt the legitimacy of a presidential election. But the reality is more complicated, political scientists say. Research has shown that the answers that partisans (on the left as well as on the right) give to political questions often reflect not what they know as fact, but what they wish were true. Or what they think they should say.

It’s incredibly hard to separate sincere belief from wishful thinking from what political scientists call partisan cheerleading. But on this topic especially, the distinctions matter a lot. Are Republican voters merely expressing support for the president by standing by his claims of fraud — in effectively the same way Republicans in Congress have — or have they accepted widespread fraud as true? Do these surveys suggest a real erosion in faith in American elections, or something more familiar, and temporary?

HE’LL GET BACK TO YOU Back in July, Gov. Ducey said he changed his White House ringtone to “Hail to The Chief” so he wouldn’t miss a call from Trump/Pence. Guess who called while Ducey was certifying Arizona’s election? (7 secs in) pic.twitter.com/bzBGpfSIDf

The GOP Is a Propaganda Party

Media parasites have taken control of the host.

The parasite enters a fish through its gills, attaches to its tongue, consumes the tongue, and then becomes a sort of new tongue. For the rest of the fish’s life, it swims around with the “tongue-eating louse,” as the isopod is known, operating its mouth.

At first, seeing a photo of it made me recoil. Then, I realized it seemed oddly familiar: It reminds me of the relationship between what’s loosely defined as “conservative media” and the GOP.

For a long time, most influential right-leaning media figures were content to swim alongside the GOP, flowing along in the same general direction. Until Donald Trump came along. Then they saw an opportunity to burrow deep inside the GOP and wield real power.

It worked. So well that the GOP, as an institution, no longer controls its tongue and its craven media parasites are the only thing keeping it alive.