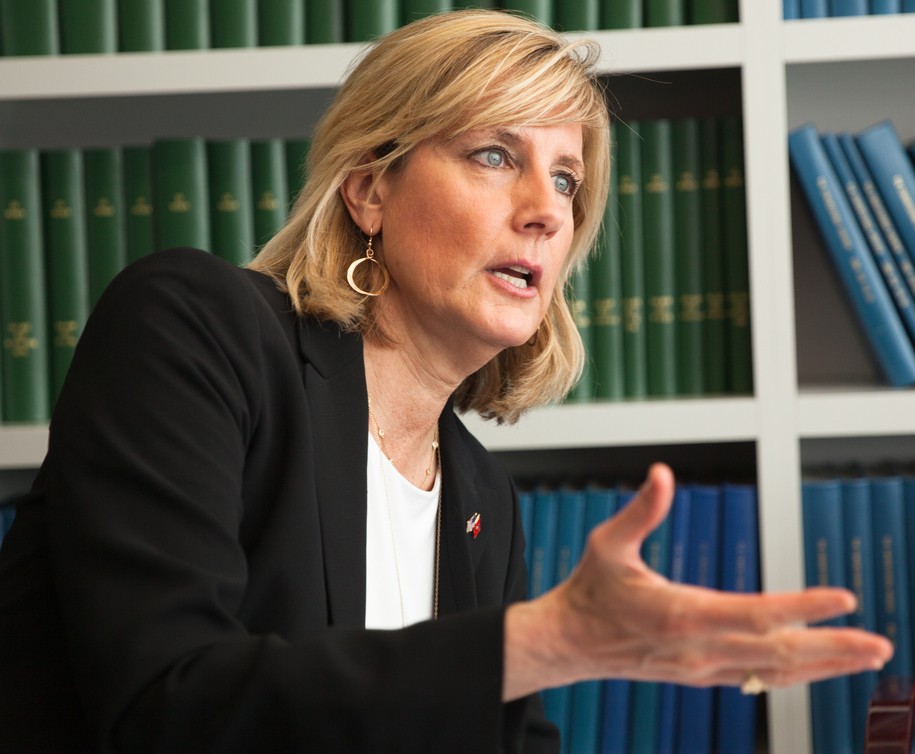 ● NY-22, IA-02: The outcomes in two final House races remain unknown, as the very slimmest of margins separate the candidates in both New York’s 22nd Congressional District and Iowa’s 2nd.

In New York, official results submitted to a judge on Monday give Republican challenger Claudia Tenney just a 12-vote lead over Democratic Rep. Anthony Brindisi, but the race is far from over. Syracuse.com’s Mark Weiner reports that the fate of 2,500 absentee and provisional ballots has yet to be resolved, while officials in Chenango County announced they’d discovered an additional 55 “apparently mislaid” ballots a day after all eight counties in the district had been ordered to provide updated vote totals to state court Judge Scott DelConte.

As Weiner puts it, the entire vote-counting process in this extremely close race has been “shrouded in secrecy,” with some counties not releasing final vote counts prior to DelConte’s deadline. The next public hearing in the matter will take place this coming Monday.

Meanwhile, in Iowa, certified results in Iowa’s 2nd Congressional District give Republican Mariannette Miller-Meeks a six-vote edge on Democrat Rita Hart following a recount. However, Hart’s campaign says that “additional legal ballots may have yet to be counted” and promised to announce its “next steps” some time in the “next few days.” According to the Des Moines Register, Hart has until Wednesday to seek legal review.

As FiveThirtyEight’s Nathaniel Rakich recently noted, just three races for Congress have been decided by fewer than 20 votes over the last century. It’s possible that 2020 could add two more to the list.

● GA-Sen-A, GA-Sen-B: Republicans have been clamoring since Election Day for Donald Trump to visit Georgia, but now that he’s finally coming on Saturday, they’re suddenly nervous. Will Trump successfully rally his supporters behind David Perdue and Kelly Loeffler? Or will he continue his attacks on Republican elected officials and thereby convince the MAGA brigades that it isn’t even worth participating in an election he thinks is already rigged?

And what about the chief target of his scorn, Gov. Brian Kemp, whom Trump recently said he was “ashamed” to have supported in 2018? Will he show up at Trump’s rally and risk getting shat on while sitting in the front row? Or will he stay home and face accusations that he doesn’t love Trump with sufficient ardor—accusations that could haunt him in a primary?

While we ponder all those questions, here are a few new ads:

● NC-Sen: Outgoing Rep. Mark Walker formally kicked off his bid Tuesday for the seat held by retiring Sen. Richard Burr, making him the first Republican to join the race. He definitely won’t be the last, though, as a sizable number of fellow Republicans are also eyeing the contest. Walker will be banking on his appeal to religious conservatives as a former megachurch pastor, which helped power him to an unexpected victory in a 2014 House primary against Phil Berger Jr., the son of one of the most influential politicians in North Carolina.

● MN-Gov: Former NFL center Matt Birk, who played for the Minnesota Vikings for a decade, said in a radio interview Tuesday that he’s “exploring” the possibility of running for governor as a Republican. Birk has long been vocal about his political views: In 2012, Birk wrote an editorial attacking same-sex marriage, and a few months later, after winning the Super Bowl with the Baltimore Ravens, in his final season as a player, he refused to participate in the team’s visit to the White House because of Barack Obama’s support for abortion rights.

Earlier this year, Birk was blasted for tweeting, “As we listen to epidemiologists, it’s good to remember that the Titanic was built by experts, the Ark by amateurs.” (It’s a line conservatives love for some reason, apparently forgetting who it was who instructed Noah.) Birk began expressing interest in public office since shortly after he left the NFL—Republicans even wanted him to run against Al Franken in 2014—but he has yet to make the leap.

P.S. We recently took a stroll through the field of other potential GOP contenders who could challenge Democratic Gov. Tim Walz in 2022.

● NE-Gov: While wealthy agribusinessman Charles Herbster filed paperwork three weeks ago to seek the GOP nod, his team says he hasn’t committed to running to succeed termed-out Republican Gov. Pete Ricketts. “This committee allows Charles to fully explore all his options as we head into the 2022 election cycle,” a spokesperson said, adding, “It is not an official campaign announcement.”

No matter what Herbster does, though, there will likely be plenty of Republicans interested in seeking an office that the party has held since the 1998 elections. The Lincoln Journal Star’s Don Walton says that “[n]early all speculative Republican lists include” both Lt. Gov. Mike Foley and Nebraska Chamber of Commerce and Industry president Bryan Slone, though neither man appears to have said anything yet.

Both men lost the six-way 2014 primary, a contest that Ricketts won with 27% of the vote. Foley, who was the state auditor at the time, scored fourth place with 19%, while Slone was dead last with just 4%.

Foley, though, unexpectedly got the chance to stay in state government after losing the nomination for the top job. Candidates for governor and lieutenant governor compete in both the primary and the general election as a ticket in Nebraska, and Ricketts’ running mate initially was the sitting lieutenant governor, Lavon Heidemann. Heidemann, though, both dropped out and resigned that September after his sister successfully requested a restraining order against him, and Ricketts replaced him on the ballot with Foley.

● OR-Gov: Republican Bud Pierce, a physician who was his party’s nominee for the 2016 special election for governor, announced Monday that he would run to succeed termed-out Democratic incumbent Kate Brown. Pierce is the first notable candidate on either side to enter the race for an office that Team Blue has held since the 1986 elections.

Pierce decisively won the primary four years ago to take on Brown, who had been elevated from secretary of state to governor the previous year after Gov. John Kitzhaber resigned. While Pierce and his wife together contributed $1.6 million to his campaign, he always looked like the underdog in this Democratic-leaning state, and no major outside groups on either side spent here.

Pierce also earned ugly headlines a month ahead of Election Day at a debate when, after Brown disclosed that she had been a victim of domestic violence, the Republican declared, “a woman that has a great education and training and a great job is not susceptible to this kind of abuse by men, women or anyone.”

Pierce, who was roundly booed by the audience, soon issued a non-apology, but his press secretary resigned shortly afterwards with a statement of her own saying that her departure “isn’t about politics, it’s about my moral values.” Pierce later put out a video that featured him standing with his wife and several other women and expressing remorse for “my ignorant and potentially dangerous statement.” Brown ended up defeating Pierce 51-43 as Hillary Clinton was carrying the state 50-39.

Democrats have a considerably larger bench in the Beaver State, and there are plenty of candidates who could compete in the primary to succeed Brown. State Treasurer Tobias Read notably refused to rule out seeking a promotion during his successful re-election campaign this year, and the Willamette Week’s Nigel Jaquiss name-drops some other prospective Democratic candidates:

None of these people appear to have said anything directly about their interest, or lack thereof. (Interpret this tweet as you wish.)

● FL-20: Broward County Commissioner Barbara Sharief, who faces term limits in 2022 for her current post, has filed paperwork to run against veteran Rep. Alcee Hastings, a fellow Democrat. Sharief, however, hasn’t said anything publicly yet, and it’s possible that redistricting could leave both politicians with different seats to run in.

The two hail from the same patch of South Florida: Hastings was a longtime resident of the city of Miramar, where Sharief served as vice mayor before running for the Broward commission in 2010. Five years ago, though, Hastings moved an hour north to Delray Beach, which sits outside of the current 20th District but nestled between its populous arms that take in West Palm Beach and Fort Lauderdale.

Even if he avoids a direct conflict with Sharief (who, like Hastings, is Black), the longtime congressman could be ready to call it a career. Hastings, 84, was first elected to the House in 1992 and is the longest-serving member of Florida’s congressional delegation. During his tenure, he’s faced primary opponents just a handful of times and never once had to deal with a serious threat. (The general election is always a foregone conclusion in this deep blue district.)

One of those rare challenges came in 2014, when former heavyweight boxer Jameel McCline sought to unseat the incumbent. McCline earned an endorsement from Sharief in that race—after Hastings had backed Miramar Commissioner Alexandra Davis in her primary against Sharief, who said, “Obviously my working relationship with Alcee is not what I thought it was.” That working relationship didn’t improve: Both challenges failed badly.

Hastings also announced last year that he was undergoing treatment for pancreatic cancer. Shortly before Election Day, his campaign declined to answer questions about his health when asked by the Palm Beach Post.

● AK State House: According to a spokesperson, Republican Minority Leader Lance Pruitt will seek a recount after certified results showed him trailing Democratic challenger Liz Snyder by 13 votes for the 27th State House District in the Anchorage area. However, as the Anchorage Daily News‘ James Brooks notes, only one recount of 35 recorded in the state over the last 60 years since statehood has shifted the outcome in a race with a margin bigger than Snyder’s lead, an election for state Senate in 1978.

Should Snyder’s win stand, it will reaffirm Democrats’ control over 15 seats in the 40-member chamber, with another three held by allied independents (House Speaker Bryce Edgmon, Rep. Dan Ortiz, and the newly elected Calvin Schrage). One more independent, newcomer Josiah Patkotak, hasn’t confirmed which side he’ll align with but has indicated he won’t join with Republican hardliners, who hold 18 seats.

That likely leaves the balance of power in the hands of three Republican members of the outgoing bipartisan coalition that has held sway over the chamber for the past two years: state Reps. Steve Thompson, Bart LeBon, and Louise Stutes. The trio, however, has not spoken publicly about their intentions since the election.

● CA-25: On Monday evening, Democrat Christy Smith conceded her rematch with Republican Rep. Mike Garcia, who currently leads by 333 votes, a margin of 0.1%. Garcia defeated Smith in a May special election by a much wider 55-45 spread. The AP called the race on Tuesday.