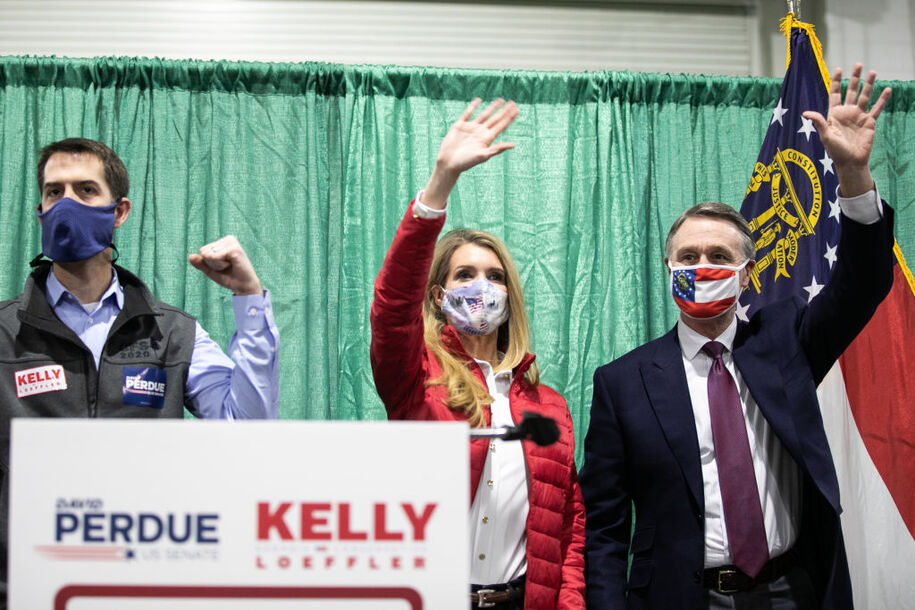 Following a Georgia official’s passionate plea to end Donald Trump’s fraud madness before someone gets killed, Trump and his allies have dug in their heels, continuing to fan the conspiracy flames that have inspired a rash of death threats in the state.

Mere hours after GOP election official Gabriel Sterling warned Tuesday that “someone’s going to get shot,” Trump retweeted video of the remarks with the exhortation, “Expose the massive voter fraud in Georgia. What is Secretary of State and @BrianKempGA afraid of.”

Give $4 right now to capitalize on Republicans’ epic meltdown in Georgia and secure a Democratic Senate majority.

The next day, Trump’s miscreants got to work on the ground in Georgia, doubling down on his evidence-free fraud claims and counseling Trump voters to skip the election if state officials don’t do something about the fraud that never happened.

“I would encourage all Georgians to make it known that you will not vote at all unless your vote is secure,” attorney and conspiracy theory specialist Sidney Powell told a crowd of hundreds Wednesday at a rally in the northern Atlanta suburb of Alpharetta. “There should not be a runoff. Certainly not on Dominion machines.”

Trump and Co. have been railing against Dominion Voting Systems machines for weeks, falsely claiming they allotted extra votes to Democrat Joe Biden. There continues to be zero evidence for this lie, and Trump’s campaign has now logged an unprecedented string of 40 post-election legal losses to 1 win in the courts, where they’ve proven to be uniquely incompetent.

Another Trump acolyte, lawyer Lin Wood, reinforced Powell’s lies in case any rally attendees had lingering doubts and were left wondering what to do. “We’re not going to vote on your damn machines made in China. We’re going to vote on machines made in the USA!” Wood charged. Then he trained his sights on Georgia’s elected officials and the two GOP senators facing critical runoffs in January, Kelly Loeffler and David Perdue, who have already sold their souls to Trump—backing his fraud claims and calling for the resignation of Secretary of State Brad Raffensperger.

“If they don’t fight for Donald Trump, including Loeffler and Perdue, send them all home!” Wood instructed the crowd. “You are criminals!”

As Wood pushed rally goers to harass GOP Gov. Brian Kemp until he called a special session to overturn Biden’s win, “Lock him up!” chants ensued. At one point, state Rep. Vernon Jones urged Republicans to vote for Loeffler and Perdue, according to Atlanta Journal Constitution reporter Greg Bluestein. “Georgia has a history of fighting,” Jones said, “we are going to hold the line.”

Wood followed up by directly contradicting him, again urging GOP voters to boycott the January runoffs until Trump is vindicated and questioning why Perdue and Loeffler hadn’t attended the rally.

Loeffler’s absence remains unexplained, but Perdue was likely too busy making more impeccably timed stock trades to attend—yet another aspect of the GOP’s Georgia meltdown that has proven to be simply mesmerizing. Loeffler and Perdue sparring for press attention over which senator has spent more time abusing their public office to enrich themselves should be an epic scandal in and of itself. But even Perdue’s level of corruption has been outshone by the civil war that has erupted between Peach State Republican officials and Trumpworld.

For their part, Loeffler and Perdue are haplessly caught in the middle. The day before the rally, GOP election official Sterling excoriated the Senate Republicans for continuing to support Trump’s fantasy fraud while his supporters direct death threats at Secretary of State Raffensperger, his wife, and even private citizens who had jobs tangentially related to the election.

“Senators, you have not condemned this language or these actions. This has to stop. We need you to step up and, if you’re going to take a position of leadership, show some,” Sterling implored. “All of you who have not said a damn word are complicit in this,” he added.

The duo messages of Loeffler and Perdue betraying Trump while simultaneously failing to emerge as voices of reason when real lives are at stake could prove to be a disastrous drag on their electoral hopes. On the one hand, they’re facing mutiny among Trump cultists who see them as insufficiently loyal to Dear Leader and even traitorous; on the other, they’re facing a defection among suburbanites who rejected Trump at the polls in record numbers even as they embraced many down-ballot GOP candidates.

Biden actually outperformed Democratic Senate candidate Jon Ossoff in the Atlanta suburbs and surrounding areas by some 50,000 votes, and Perdue has repeatedly expressed his belief that those same voters will buoy both him and Loeffler at the polls in January. But man—if you’re too soulless to be a calming force as literal death threats swirl in your state, is that really the profile in courage those suburban voters who doomed Trump are looking for? Probably not, and it’s definitely not the GOTV message any candidate wants heading into a contest where turnout will mean everything, particularly with Democrats riding the high of a big Biden win there.

This is the backdrop against which Trump will parachute into the state on Saturday in his first public appearance there since the election. And frankly, no one has any idea what he’ll end up saying. To date, Trump been all over the place—signaling tepid support for the two GOP senators while simultaneously trashing the state’s election system.

Whatever Trump says, it will almost surely be incendiary, portending a full month of fireworks between now and the runoffs on January 5. Amazing.

We need all hands on deck to win the Georgia Senate runoffs on Jan. 5, and you can volunteer from wherever you are. Click here to see the Georgia volunteer activities that work best for you.