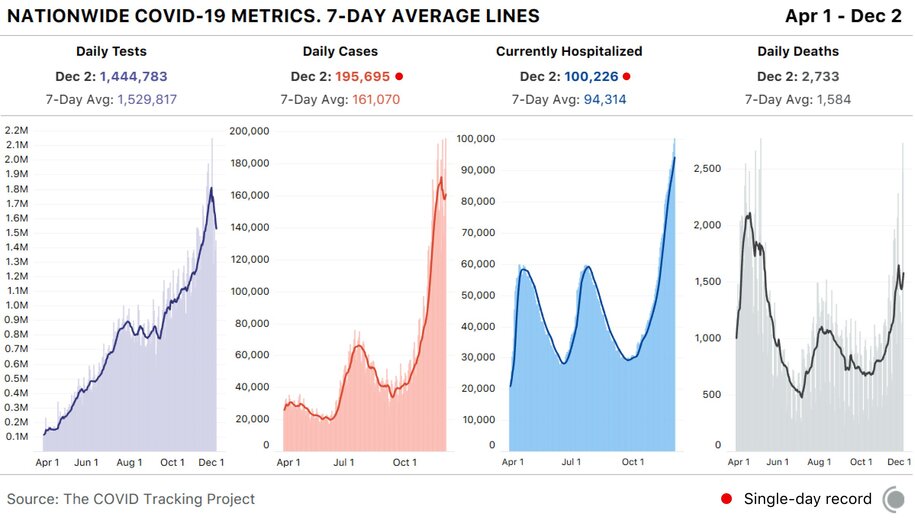 Donald Trump can’t win the election, and all of Washington, DC knows it. But that won’t stop Trump from fleecing the rubes.

Trump has been on a misleading and highly lucrative fundraising drive, telling supporters that they can help overturn the election if they donate while directing the bulk of the cash to his newest political group instead of the entities fighting in courthttps://t.co/Eske0AvbXD

President Trump’s planned trip to Georgia on Saturday to campaign for two Senate candidates in tight runoff races has some anxious Republicans concerned that he could do more harm than good by repeating false claims about the voting system, attacking GOP officials and further inflaming a simmering civil war within the state party.

That war showed no signs of abating this week, with competing GOP factions growing increasingly angry and distrustful of one another.

The polls have the two Democrats tied (Jon Ossoff) or leading (Ralph Warnock). But make no mistake, these are races we can win.

9 of 10 Trump voters I’ve talked to believe mass voter fraud occurred. 8 of those 9 cite the protracted counting and Biden’s “comeback” after Trump led Tues night. Again: Legislatures in MI/WI/PA failed America by not allowing pre-processing. This madness could’ve been avoided.

But the refusal of the state’s highest court to take up Trump’s petition is a new blow to Trump’s foundering efforts to overturn the election — and a particularly stinging rebuke, given that conservatives hold a 4-to-3 majority on the elected panel.

One conservative member of the panel, Brian Hagedorn, joined the court’s three more liberal members in declining to take the case.

Doctor Fauci will be staying on in his current role and advise incoming President Biden on the pandemic, he told me. Fauci says he spoke to Biden about it personally today. During the phone call Biden said he would appreciate it if Fauci stayed on to continue fighting the virus.

Trump’s biggest remaining challenge — if he’s up to it

Three former U.S. presidents from both major political parties made a significant statement this week: They would take a coronavirus vaccine on camera to soothe any public concern.

What we don’t yet know is how much President Trump will do to accomplish the same task. But a new poll shows just how important that might be in the waning days of his presidency. Indeed, it might be the most significant remaining question of the Trump era.

With multiple vaccines in the final stages of approval and hope for their extensive deployment in the weeks and months to come, Trump is preoccupied with a quixotic effort to remain in office. He has in the past hailed the rapid development of vaccines, including holding them out as a potential quick fix during the 2020 election. But since he lost the election, he has shown much more of a desire to claim credit for that development than to focus on the rapidly growing coronavirus problem in the United States, where the daily death toll is now setting records and things are on a terrible trajectory. Trump has also in the past expressed skepticism about vaccines — most notably and baselessly linking them to autism — and flouted some of the more basic coronavirus mitigation efforts, including questioning the efficacy of masks.

I wonder how Trump won Iowa?

“We are in a very dangerous place”: White House COVID-19 task force pleads with Texas health officials to warn the public

As the COVID-19 pandemic reaches dangerous new levels nationwide, the White House Coronavirus Task Force acknowledged this week that state and local policies in Texas and around the country could be underplaying the severity of the virus and urged public health officials to take their case directly to the public.

“If state and local policies do not reflect the seriousness of the current situation, all public health officials must alert the state population directly,” said Sunday’s task force report, which was sent to all states.

The report also recommended that people over age 65 or those who are at an increased risk of contracting the virus should have groceries and other necessities delivered and avoid any indoor public spaces where people are unmasked.

The report was obtained by CNN and other organizations.

There’s a name for what doctors, nurses, and others fighting the pandemic are feeling, an expert tells @elainejgodfrey: “Moral distress, or the sense of loss and helplessness associated with… navigating limitations in space, treatment, and personnel.” https://t.co/oXloOM8qPH

The challenges will be as much logistical as they’ll be scientific.

Having such a promising vaccine for a novel pathogen ready to go less than one year after the disease appeared in the U.S. would be a remarkable and historic scientific achievement made possible by cooperation between the private and public sectors, including the Trump administration’s $18 billion Warp Speed initiative.

It will take similar cooperation to produce and distribute the vaccines once they are ready. Trump officials have said they have been working to make sure the manufacturers get the supplies they need, from vials and plungers to the chemical ingredients for the vaccine itself.

Meanwhile, Defense Department logistics officials have been making sure plans are in place to get the vaccine from manufacturing plants scattered across the U.S. to the facilities that will be administering them. Most of the manufacturers are contracting with pharmaceutical supply and distribution company McKesson; Pfizer is handling distribution on its own.

The Three Strains of the GOP: Crazies, Quiets, and Hostages. And Yeah, They All Suck.

In this twilight of Trumpism, Republicans have shown no more backbone than they ever have. And most, of course, are worse than spineless.

The first group, the crazies, is the one that has flourished under Trump and Trumpism. They’re the people who would start firing squads if necessary. They are the Trump cheerleaders, the worst and ugliest of the Trumpian sycophants, the Matt Gaetzes, the Louie Gohmerts, the Lou Dobbses, the Maria Bartiromos. These people are happy to ride the elevator down to the basement with Trump….

Then there are the quiets, the people who know better but are too cowardly to do the right thing. These are the people who live in mortal fear of alienating the base. People like Mitch McConnell, Roy Blunt, and all those senators nobody’s ever heard of from Idaho and those places that shouldn’t have two senators to begin with. Blunt, of Missouri, appeared on CNN’s State of the Union and was too pathetic and cowardly to call Joe Biden “the president-elect” despite the fact that he is pretty indisputably the president-elect.

Lin Wood and Sidney Powell are totally destructive. Every Georgia conservative who cares about America MUST vote in the runoff. Their dont vote strategy will cripple America