Compared with the need, job gains were meager in November. At this rate recovery will take years 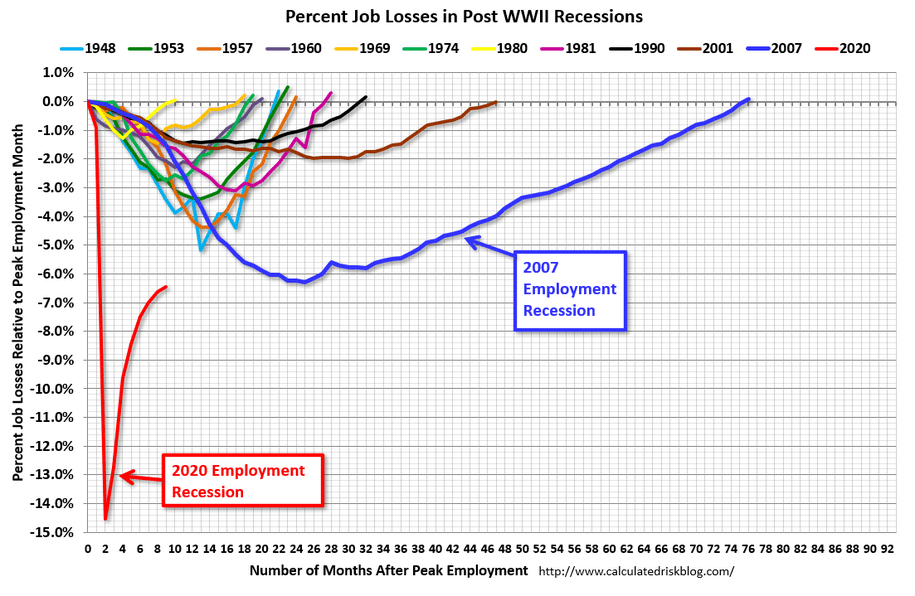 In yet another indication that the recovery from the Pandemic Recession has dramatically slowed, the Bureau of Labor Statistics reported Friday that nonfarm employment rose by a mere 245,000 jobs in November. There were 344,000 gained in the private sector, but in all levels of the public sector 99,000 jobs were lost. The headline unemployment rate fell to 6.7%, but that was mostly a product of 400,000 people leaving the labor force. An alternative measure that gauges both unemployment and underemployment fell 0.1 to 12.0%.

In the pre-pandemic Before Times, those results would fit well within the range of monthly job gains during the past five or so years. In November 2019, for example, the economy created 256,000 new jobs. But now, with 9.8 million more Americans out of work than was the case in February before the coronavirus started its killing spree, the November gain in jobs shows the recovery’s weakness. At the current rate of growth, it would take years to get back where we were just 10 months ago. And while some companies are obviously adding workers, company after company after company is laying off thousands of workers or contemplating doing so.

One of the more disturbing statistics in the report is that 385,000 more people joined those Americans who have been unemployed for 27 weeks or longer. That’s more than triple the number in November 2019.

The bureau’s job reports rely on two surveys for their data—the Current Population Report of phone interviews with 60,000 households and the Current Employment Statistics survey of 145,000 businesses. The number of jobs gained or lost is determined from the CES and the rate of unemployment from the CPS.

When reviewing a bureau report, it’s important always to keep in mind that the data provide a snapshot of the job situation that is at least three weeks old since the CPS and CES surveys are conducted in the week that includes the 12th of each month. Thus, not reflected in Friday’s report are the impacts of any recent moves by mayors and governors to impose or reimpose restrictions on business operations and social gatherings because the virus has been taking an ever-heavier toll.

On the other hand, with the probability that the first COVID-19 vaccines will be available in just weeks, some businesses may choose to hang onto employees and tough it out for a little longer in hopes there will soon be a return to something approaching the normality of the Before Times.

One impact of the Pandemic Recession has been a drop in the labor force, which now has some 4.1 million fewer people than it did in February. Prominent among the drop-outs are women and older workers pushed reluctantly into early retirement. But at least some of those who are counted as having left the labor force really haven’t. The bureau puts any jobless person who has not looked for work in the past four weeks as being out of the labor force. Under our current circumstances, where looking for a job is more difficult than usual, that definition distorts reality.

In November, the number of persons not in the labor force who currently want a job increased by 448,000 to 7.1 million; this measure is 2.2 million higher than in February. These individuals were not counted as unemployed because they were not actively looking for work during the last 4 weeks or were unavailable to take a job. […]

About 3.9 million persons not in the labor force in November were prevented from looking for work due to the pandemic. This measure is up from 3.6 million in October.

[S]ome economists see three reasons the pandemic’s depressing effect on the labor force could linger. First, it appears to have sped up some baby boomers’ decision to retire, shrinking the number of productive workers in the economy prematurely. Second, it is forcing some parents of young children, in particular women, to reduce their hours or stop working altogether, which could make a comeback harder. Third, it is falling particularly heavily on workers with less education and skills. These workers often struggle to find well-paying work and many drop out of the workforce.

Participation fell sharply after the 2007-09 recession and never fully recovered. This partly reflected demographics as the first baby boomers qualified for Social Security in 2008. The recession damped participation of “prime-age” workers, those 25 to 54, which didn’t return to 2007 levels until 2019, when the labor market was strong. Lower participation reduced average annual economic growth by 0.6 percentage point from 2009 to 2017, according to S&P Global.

Philadelphia Federal Reserve President Patrick T. Harker warned Wednesday that the economy is “plateauing” and that millions of the 22 million jobs lost in the spring could be permanently lost to automation and the “evaporation of fiscal support—particularly for low-income households.” Automation has been being implemented since long before the pandemic struck, but since then it’s been put in place at “lightning speed,” he said. People of color are more likely than white people to work in jobs at the greatest risk for being permanently lost, “and that leads to the alarming conclusion that pandemic-induced automation will—as we have in fact seen—only serve to accentuate preexisting disparities in our society.”

Harker elaborated, “Categories like department stores were already struggling, and Covid-19 only served to expedite their demise. Racial minorities like Black Americans were already more likely to be unemployed than other groups, though one of the salutary trends of the pre-pandemic economy was that this gap was narrowing—unfortunately, Covid-19 has erased that progress.”

In testimony Tuesday before the Senate Banking Committee, Treasury Secretary Steven Mnuchin and Fed Chairman Jerome Powell offered two different outlooks of the economy. Mnuchin focused on positive data such as growth gross domestic product and the speed with which the economic began recovering this summer, while Powell discussed the inequitable nature of the frail recovery.

Here are more data from the November jobs report:

The civilian workforce fell 400,000 in November.