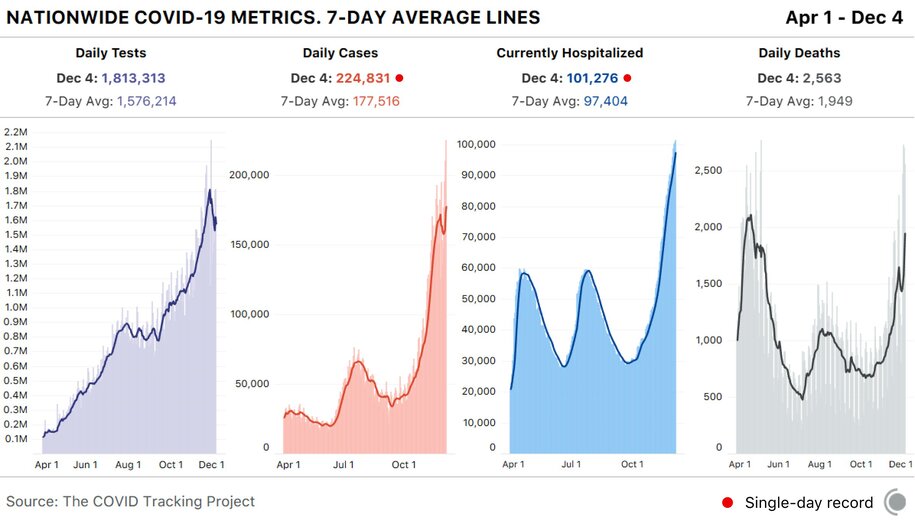 The U.S. Has Passed the Hospital Breaking Point

A new statistic shows that health-care workers are running out of space to treat COVID-19 patients.

Since the beginning of the pandemic, public-health experts have warned of one particular nightmare. It is possible, they said, for the number of coronavirus patients to exceed the capacity of hospitals in a state or city to take care of them. Faced with a surge of severely ill people, doctors and nurses will have to put beds in hallways, spend less time with patients, and become more strict about whom they admit into the hospital at all. The quality of care will fall; Americans who need hospital beds for any other reason—a heart attack, a broken leg—will struggle to find space. Many people will unnecessarily suffer and die.

She said Mitch McConnell also agrees on pairing the two together.

Pelosi said the $908 billion proposal released this week by a centrist group of Senate and House members helped restart the stimulus talks, which fell apart just before the election after months of dragging on with little real movement.

“There is momentum — there is momentum with the action that the senators and House members in a bipartisan way have taken,” Pelosi said Friday, in the latest sign that negotiators are closing in on a deal. “The tone of our conversations is one that is indicative of the decision to get the job done.”

If this proves correct, 2 approvals could be in hand by Christmas…CBER Will Need About A Week To Complete COVID Vaccine Assessment Following Advisory Cmte., Marks Says https://t.co/GilTiFlFRv

Dr. Fauci’s gamble pays off — white-knuckling his way through Trump set him up to steer Biden

For months, Fauci endured calls to resign in protest, but it’s good he didn’t — now he can shape vaccine policy

To add insult to injury, Fauci has also been called upon to resign his position. Not by Trump’s loyal supporters who want to believe that COVID-19 is somehow a “hoax” (although they certainly called for Trump to fire him) but by people who do take the virus seriously. For months, Fauci has heard repeated calls to walk away from his job, in protest of Trump’s malicious and incompetent handling of the pandemic.

But Fauci’s strategy of hanging in and meeting Trump’s vitriol with bland responses, while it may not have been dramatically satisfying, turned out to be successful: Not only is President-elect Joe Biden planning to keep Fauci on in his current role, the incoming president is also designating the famous disease expert as his chief medical adviser.

“It’s an amazing thing to look at what they think is some kind of neutral silence… This is beyond party before country or power before country. It’s really trying to break the system and it’s unforgivable” – A.B. Stoddard w/ @NicolleDWallace pic.twitter.com/9Bfoq71KJM

He went on to urge lawmakers to come back for another wave of assistance after Inauguration Day, in part to help hasten the deployment of a coronavirus vaccine. Mr. Biden also said it will be important for lawmakers to pass more sweeping legislation to address longstanding needs in the economy, like rebuilding infrastructure.

“To truly end this crisis, Congress is going to need to fund more testing as well as a more equitable and free distribution of the vaccine,” Mr. Biden said. “We’re going to need more economic relief to bridge through 2021 until this pandemic and economic crisis are over.”

Read my latest Visuals blog post. I show “before and after” photos from recent shoots and tell how to transform pictures. https://t.co/2NTaVVQNYd

Atul Gawande on Coronavirus Vaccines and Prospects for Ending the Pandemic

The New Yorker staff writer discusses when a vaccine might be ready for distribution, who should receive it, and whether eradicating the virus is possible.

When this began, I read “The Great Influenza,” John M. Barry’s book about 1918 and the horrendous flu that killed millions worldwide, and many hundreds of thousands in the United States. I thought to myself, Well, it’s not possible that we would repeat these mistakes, because, after all, we learn from history, even if the President of the United States does not. How is it possible that we made these same mistakes on such a mass scale? Do you lay it all at the feet of the President?

There’s a big part of this that I lay at the feet of the President. Imagine Pearl Harbor happened, and then we spent seven or eight months deciding whether or not we were going to fight back. And then, seven or eight months into it, a new President is going to come in who says, O.K., we are going to fight now. But you now have substantial parts of the country already arrayed against the idea that fighting it is worthwhile. In the meantime, some states have fought the attack and other states have not, and they’ve had to compete with each other for supplies. That’s the mess we have.

They’re Fine With It

Republicans have no qualms with Trump’s dangerous conspiracy theories—until they get tangled up in them themselves.

Why aren’t more Republicans standing up and speaking out about Donald Trump’s reprehensible acts? It’s the eternal question of the Trump era and one that’s been renewed this week after GOP officials in Georgia made public pleas to Republicans to rein in the president’s dangerous election conspiracies.

After four long years, it’s finally time to stop parsing the motivations behind their collective silence and say what the real answer is, which is almost too scary to admit.

They’re fine with it. All of it.

THE LATEST: Judges turn back claims by Trump and his allies in six states as the president’s legal effort founders by @eliseviebeck @emmersbrown @PostRoz https://t.co/cGFiOks0lc

It is often claimed that Republicans who refuse to concede Trump’s loss are suffering from “cowardice” or that he has held them “hostage.” In this telling, Republicans secretly know the truth but won’t say so, simply because the political price of weathering his fearsome rage-tweets is too great.

This won’t do. It badly undersells the bottomless bad faith and dishonorable instrumentalism that Republicans are employing here. Yes, Republicans know Trump lost and that contradicting him on this point might cost them some of his supporters.

But they are fully embracing the opportunity to use this situation to their advantage, not doing so because they see no other option. They are trying to harness and channel all this depraved Trumpian rage to their instrumental advantage, not work around it, despite its extraordinarily destructive potential.

The conceit that “cowardice” is the driving motive here imagines that these Republicans secretly harbor principles that they’d like to honor if only they could do so safely. And while there have been honorable Republicans who have defended our political system at great personal risk, there is just zero indication that Republicans such as Perdue have any such principles.

Republican officials lied about the election; many Republican voters were convinced to believe the lie; so Jim Jordan feels a responsibility to explore the lie in more detail. That’s not how logic works. https://t.co/waRCnppbbG

It has been a wearying political year, no question, but only you can give America this gift: a constructive presidency that will improve people’s lives.

Please do not tune out these races, especially if you live in Georgia. Anyone anywhere can send money, but only you can vote. It has been a wearying political year, no question, but if you choose, you can give your country a great gift: a constructive presidency that will improve people’s lives.

And no, you didn’t already do that by voting for Joe Biden.

The French prime minister looking for his glasses, which are on his face, is all of us who have ever worn glasses pic.twitter.com/nyGV5Z9Ny1