Lyft drivers issue a warning in the wake of California’s Prop. 22 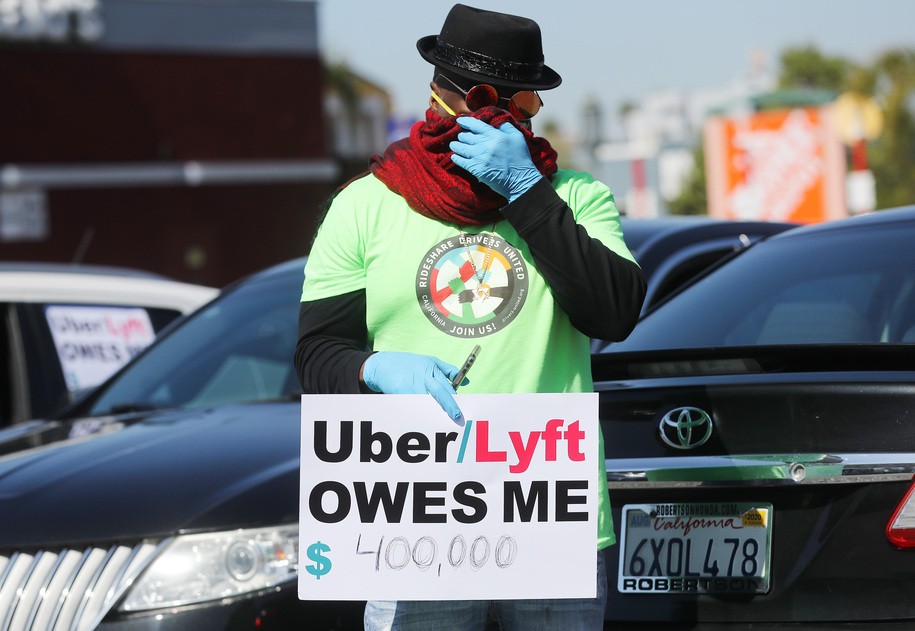 Driving for Lyft has been Cherri Murphy’s primary source of income for nearly three years. At first, she said it seemed like a good and flexible job option while she put herself through graduate school to get her master’s degree in theology. “Over the years, I realized that I was working for an organization that is in the business of exploitation for profit,” Murphy told Prism. Murphy is a driver in Oakland, an organizer with the group Gig Workers Rising, and a social justice minister. Now, she’s mourning the passage of California’s Proposition 22.

At the core of Prop. 22’s inception is a 2019 California labor law, AB5, which extended employee classification to gig workers. Uber and Lyft claimed the law would negatively impact the way they conduct business, and went as far as threatening to shut down their services in California when a court in August ordered them to comply with AB5. Instead, they poured millions of dollars into a ballot initiative campaign to buy themselves a law, Murphy said.

Prop. 22 passed with some 58% of voter support on Election Day, largely thanks to a saturation of misleading ads about what the law would achieve, Murphy said. Uber, Lyft, DoorDash, Instacart, and Postmates spent over $200 million on the Yes on 22 campaign—the most expensive ballot measure effort in the history of California. The law was also designed so that it would be very difficult to amend or overturn in the future, with changes requiring a 7/8 supermajority in the California legislature.

After the election, the Yes on 22 campaign celebrated its win, saying Prop. 22 “represents the future of work in an increasingly technologically-driven economy,” according to a press release. In an emailed statement, a Lyft spokesperson told Prism, “In survey after survey, the vast majority of drivers said they wanted to remain independent contractors. California voters heard them, stood with them, and delivered them new benefits, including a healthcare subsidy and minimum earnings guarantee, by passing Prop 22.”

As far as wages, Prop. 22 promises workers 120% of the minimum wage, calculated based on the time drivers spend on a trip or en route to a trip. A study funded by the Yes on Prop 22 campaign alleged drivers would make between $25-$27 per hour under the proposition. However, a study by the University of California, Berkeley reported drivers’ wages could be as low as $5.64 an hour—far below California’s minimum wage, which is currently $12 or $13 an hour depending on employer size, and rising to $15 by 2023.

“[In this year’s election], we were up for a fight up and down the ballot for racial and economic justice. Uber and Lyft were included,” Murphy said. “Knowing that racial justice is economic justice, it was vitally important that we look at Prop. 22 from that context.” Black and brown workers are disproportionately impacted by Prop. 22 as nearly 80% of drivers in San Francisco alone are people of color, and more than half are immigrants.

“At the onset of COVID-19, gig workers like myself were faced with the devil’s choice: to continue working despite a highly contagious disease, or risk losing the roof over our heads and the ability to pay bills,” Murphy said. “Black and brown gig workers, low-wage workers … have been at the forefront of this pandemic. We have been the hardest hit economically, and the most likely to continue to die from this virus.”

Murphy said she’s angered by the way Lyft and Uber co-opted the image of the Black Lives Matter movement in ads this year, while simultaneously advocating for a law like Prop. 22, which mostly affects the companies’ majority Black and brown workers. “[Lyft] ran ads quoting Maya Angelou’s ‘Lift Up Your Eyes,’ and [Uber ran] billboards that stated that, ‘If you tolerate racism, delete Uber.’ What they did was capitalize on the Black Lives Matter movement,” Murphy said.

Like Murphy, Carlos Ramos said working for Lyft initially made sense because he needed a quick way to start making income while maintaining a flexible schedule. “But there is not a lot of job security,” said Ramos, who’s based in Bakersfield and is also an organizer with Gig Workers Rising.

Ramos has worked for Lyft since 2017 and although he has access to health insurance through Veterans Affairs due to his military service, he recognizes not all drivers have that option. Especially during a pandemic, Ramos said, it’s “deplorable” that a ride-sharing company would advocate against providing drivers insurance.

“They’ve encouraged drivers to keep driving, to be labeled essential workers, and in the same breath said that they don’t deserve health insurance,” he said. “We’re all still driving.”

Ramos said Lyft has been “hands off” in its response to the pandemic and the safety of drivers. It’s been fellow gig workers who have provided each other with personal protective equipment, he said. Lyft’s website said the company has provided face masks and cleaning supplies to drivers across the country. In response to Ramos’s allegations, a Lyft spokesperson pointed to their health and safety guidelines for drivers, which includes links to COVID-19 safety tutorials.

The company has also been heavily criticized for suggesting that drivers could purchase additional PPE from the company’s store.

“You have the choice of starving today or maybe dying tomorrow. This is the choice essential workers are facing today,” Ramos said.

He fears for what’s to come as the country reels from the devastation brought by the pandemic and the subsequent economic crisis. “Once this is all over, what are we gonna have then? A huge workforce, all scrambling for work at the same time, and who’s gonna be there with their hands wide open? These gig companies with their new, shinny Prop. 22 law, saying they don’t have to give you any benefits and that they can do whatever they want to make as much money as they can,” he said. “We’re gonna have very desperate people trying to get any job because they need to put food on the table, and we’re gonna have companies more than willing to take advantage of them. This is the time when our labor laws should have been strengthened, not weakened. These companies are allowed to buy their own laws … and everyone else suffers.”

Ramos also warns of Lyft and Uber advocating for laws like Prop. 22 in other states and even at the federal level. His concerns are well-founded: In an interview with The Washington Post, Anthony Foxx, Lyft’s chief policy officer, said Prop. 22 had “created a structure for us to discuss with leaders in other states and Washington,” adding that Prop. 22 could be replicated and “scaled.”

“This needs to be a wakeup call for America. The nature of work is at stake here. We have to think about it for a second. What do we want work to look like in the future? Do we want a job that’s safe and secure?” Ramos said. “Just like democracy, we cannot rest. We cannot assume that labor laws will always be there.”

One thing is certain for Murphy, Ramos, and other gig workers: The fight is not over. “Regardless of what your working situation is, everyone should have dignity and worthiness … we will continue to organize,” Murphy said. “This is a setback but not a loss. I’m confident … when we get together, we will win.”