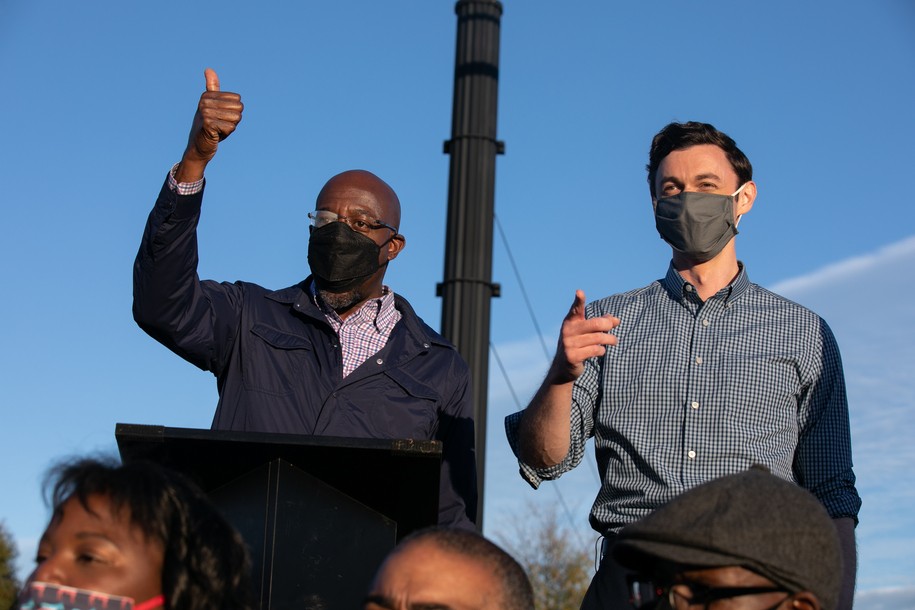 Today is the deadline to register to vote in Georgia’s upcoming Senate runoff, and to say that Democrats Raphael Warnock and Jon Ossoff need your support feels like the understatement of the decade. “This election will determine which party has control of the Senate, how much we can hold the president-elect accountable,” Christina Williams, a Clark Atlanta University student, told Daily Kos. Recognizing that importance, nonprofit workers throughout the state are making their final pushes to register voters and also encourage those registrants to vote. The Georgia NAACP, Center for Voter Information, and Voter Participation Center, nonprofits targeting eligible voters, are sending more than 1.8 million vote-by-mail mailings, with an added 19.4 million other mailers going out through January. About 65,000 are earmarked to encourage young people turning 18 years old between Jan. 1, 2020 and Jan. 5, 2021 to register. Well, now’s the time to do it.

Tom Lopach, chief executive officer of the Voter Participation Center, told Daily Kos Wednesday that his organization was able to register 110,742 people for the general election, and that “made a difference … We will be doing increased mail and digital outreach because of the runoffs,” he said. “We also are doing more media interviews to help raise awareness about the January 5 runoff.”

Lopach is hoping that by partnering with the Georgia NAACP, an organization with a trusted name in Georgia and beyond, he can attract more people to respond to mailings. “There is too much at stake for anyone to sit on the sidelines, and we are confident we can again help empower people in Georgia to elect our nation’s leaders,” Lopach said in a press release.

Rev. James Woodall, president of the state NAACP, has been fiercely advocating for Black voters and encouraging them on social media to vote. He said in a tweet Nov. 30: “According to the @GaSecofState, 940,000 absentee ballots have been requested for the runoff elections but only 1,040 ballots have been filled out and returned.”

According to the @GaSecofState, 940,000 absentee ballots have been requested for the runoff elections but only 1,040 ballots have been filled out and returned. To get your ballot in faster, drop it off at a ballot drop box near you! Check here: https://t.co/1Mh0d7GqgZ #gapol

Woodall, an associate minister at Pleasant Grove Baptist Church in Marietta, said part of the urgency in getting out the vote is righting wrongs that Sens. David Perdue and Kelly Loeffler have turned a blind eye to. One clear example is their refusal to publicly condemn President Donald Trump’s unfounded allegations of election rigging. Gabriel Sterling, voting system implementation manager with the Georgia secretary of state’s office, warned of the potentially dangerous impacts of the president’s false claims in viral video. “Someone’s gonna get shot. Someone’s gonna get killed…and it’s not right. It’s not right. Like I said we’re doing our best to keep it together,” Sterling said.

Woodall called it ”a direct example of what communities across Georgia have had to fight against for way too long … These acts of violence and terror have gone unchecked for years while Black and Brown communities screamed for help from state and national officials in Georgia,” he tweeted. “The continued endorsement of these baseless claims of election insecurity and violent attacks on poll workers and election officials by Senators @KLoeffler and @Perduesenate are a testament to this very truth,” Woodall added.

This is a direct example of what communities across Georgia have had to fight against for way too long. These acts of violence and terror have gone unchecked for years while Black and Brown communities screamed for help from state and national officials in Georgia. #GaPol https://t.co/l283Sd2HFP

For him, this election is about protecting the state’s residents. “Georgians are in danger of losing more rural hospitals while voters are being increasingly disenfranchised at alarming rates,” he said in a statement emailed Monday to Daily Kos. “The environment and drinking water continue to be polluted while our economy continues to work only for billionaires.

“This election serves as an opportunity to choose between a dull status quo that cares about virtually no one and a brighter future that finds compassion for and seeks to protect and serve as many as humanly possible.”

RELATED: 5 issues this HBCU student says Ossoff and Warnock cannot afford to miss the mark on, so they don’t