Morning Digest: Lots of Republicans could challenge the only red-state Democratic governor up in ’22 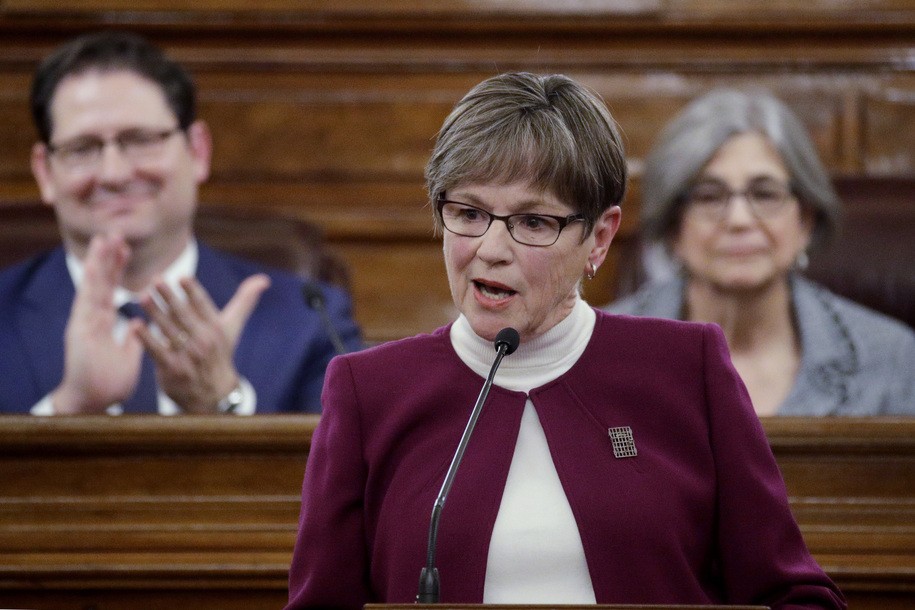 ● KS-Gov: Kansas Gov. Laura Kelly is the only Democratic governor up for re-election in 2022 in a state that Donald Trump carried, so it’s no surprise that there are many Republicans who could challenge her. Fortunately, the Kansas City Star offers a detailed look at the potential field.

One prospective candidate who has already gotten plenty of attention is outgoing U.S. Secretary of State Mike Pompeo, who did not rule out a bid earlier this week. The paper also mentions former Gov. Jeff Colyer as a possibility, and a Colyer spokesperson strongly implied that his boss is looking at a comeback. “Dr. Colyer still travels the state quite a bit, keeping up with old friends and making new ones. Everywhere he goes, people are asking him to run and offering their support,” said the aide, adding, “I’m very hopeful.”

Colyer, who became wealthy as a plastic surgeon, was elected lieutenant governor in 2010 and 2014 on a ticket with Sam Brownback, and he was elevated to the top job in early 2018 when the extremely unpopular Brownback resigned to take a Trump administration post. Colyer’s tenure proved to be brief, though, as he lost the GOP primary just a few months later to Trump-backed Kansas Secretary of State Kris Kobach by 343 votes. Following Kelly’s victory over Kobach, Colyer was almost immediately mentioned as a 2022 possibility (he also weighed a Senate bid in 2020 but demurred).

The Star reports that Attorney General Derek Schmidt is considering as well, though there’s no quote from his camp. Schmidt thought about entering the 2018 race for governor too but decided to seek a third term as attorney general instead, which he won 59-41. Schmidt, like Colyer, also talked about running for the state’s open Senate seat in 2020 but didn’t end up going for it.

Another possible gubernatorial candidate is state House Speaker Ron Ryckman, who didn’t dismiss the idea. “I’ve been asked about it, but for now I’m focused on helping to get our economy and our school kids through the pandemic,” he said when asked. Ryckman, the paper writes, notably broke state tradition this year when he successfully sought and won a third term as speaker.

One person the Star spoke with was state Rep. William Sutton, who mentioned both Kobach and Sen. Jerry Moran as possibilities, though he acknowledged he hadn’t actually “heard from any of the candidates at all.” Moran has already taken himself out of the running, though: While the Star writes that there were rumors throughout the year that the senator could challenge Kelly, Moran’s team said last month that he’d seek re-election in 2022.

Kobach hasn’t said anything about another bid for governor, though that would be just about the last thing that state or national Republican leaders would want. Kobach lost to Kelly 48-43 in 2018 after running a campaign that one longtime party operative called “the most dysfunctional thing I’ve ever seen in my life,” but undaunted, he soon set his signs on running for Senate. D.C. Republicans, who did not want to take the chance that Kobach would cost them another general election, poured millions into the primary to help Rep. Roger Marshall and attack Kobach.

Democrats agreed that Kobach would be a weak nominee and likewise spent a fortune on ads aiming to improve his prospects against Marshall. Ultimately, though, Marshall defeated Kobach by a an unexpectedly wide 40-26 margin and held the seat for Team Red in November.

Finally, the Star says that two other Republicans, outgoing Senate President Susan Wagle and 2018 lieutenant governor nominee Wink Hartman, have “come up in conversation among Republicans as potential candidates,” though there’s no word about either of their interests. Wagle ran for the Senate this year but ended her campaign in the face of pressure from party leaders who wanted to shrink the field to make it harder for Kobach to win another primary. The wealthy Hartman, who was Kobach’s running mate two years ago and financed most of their campaign, also thought about a Senate run but didn’t go for it.

● GA-Sen-A, GA-Sen-B: Joe Biden, who was repeatedly declared the winner of Georgia’s electoral votes thanks to multiple recounts that all confirmed his victory, is headed down to Atlanta on Tuesday for a rally with Jon Ossoff and Raphael Warnock. Biden campaigned with the two Senate hopefuls before Election Day, but this is his first trip back to the Peach State for the runoffs. According to the Atlanta Journal-Constitution, Democrats are hopeful that Barack Obama and Kamala Harris, who also made appearances with Ossoff and Warnock, will once again return as well.

Total ad spending across both races has now eclipsed $400 million, but thanks to the generous folks at InsideTrack, a Democratic media firm, we have a new way of making sense of it all. InsideTrack’s highly detailed interactive tool lets you see exactly who has advertised how often and where. For instance, you can drill down to see that Warnock has $3.2 million in TV time booked this week, with $2.4 million specifically devoted to the Atlanta media market.

And of course, we have some more new ads:

● NJ-Gov: Doug Steinhardt, the chair of the New Jersey Republican Party, has filed paperwork to run against Democratic Gov. Phil Murphy next year and will reportedly make a formal announcement on Friday. That would make Steinhardt, a vocal Trump supporter, the second notable Republican to enter the race, along with Assemblyman Jack Ciatterelli (or, if you’re being generous and counting businessman Hirsh Singh, the third). Steinhardt previously served four terms as mayor of the 8,000-person town of Lopatcong.

Incidentally, as NJ.com notes, despite New Jersey’s reputation as a solidly blue state, Murphy is trying to do something no Garden State Democrat has managed in 43 years: win a second term as governor. The last to do so was Brendan Byrne, whose opponents derisively nicknamed him “one-term Byrne” after he instituted a deeply unpopular income tax. Byrne, however, survived a difficult primary and got the last laugh when he secured re-election in 1977 by double digits.

● PA-Gov: USA Today’s J.D. Prose drops several new names of potential candidates for Pennsylvania governor in 2022, when Democratic Gov. Tom Wolf will be term-limited. For Republicans, he mentions state Sen. Ryan Aument and Senate President Pro Tempore Jake Corman, who has previously come up as a possible Senate hopeful, while for Democrats, he suggests Philadelphia Mayor Jim Kenney could wind up in the mix.

● VA-Gov: Former state Sen. Bill Carrico, who was a potential candidate for governor, has instead endorsed former state House Speaker Kirk Cox for the Republican nod. Meanwhile, Republican state Sen. Emmett Hanger, a 33-year veteran of the legislature whose moderate reputation has earned him multiple primary challenges, says he’s still considering a bid of his own and will likely decide before lawmakers reconvene on Jan. 13.

One intriguing name, however, won’t be joining the race: former pro basketball forward Brad Sellers, a Cleveland-area native who was drafted by the Chicago Bulls in 1986 and played several years in the NBA and overseas. After his playing career ended, Sellers returned to his hometown of Warrensville Heights, a suburb of about 13,000 people, and went to work for Fudge, who was mayor at the time. Three years after Fudge won a seat in Congress, Sellers was elected mayor himself and has since won re-election unopposed twice. He has, however, said that he supports Brown. Former U.S. Attorney Steve Dettelbach, who ran for attorney general in 2018, also says he won’t run.

● Detroit, MI Mayor: Detroit Mayor Mike Duggan announced Wednesday that he would seek a third term next year. Duggan, a Democrat who has the support of Gov. Gretchen Whitmer, does not have any serious opposition yet in this officially nonpartisan primary, though Democratic state Rep. Sherry Gay-Dagnogo told Crains Detroit that she plans to decide at the end of January. Gay-Dagnogo, who was unable to run for re-election this year due to term limits, was instead elected to a seat on the Detroit School Board.

● El Paso, TX Mayor: El Paso’s officially nonpartisan runoff between Republican Mayor Dee Margo and his predecessor, Democrat Oscar Leeser, is Saturday, and Leeser very much looks like the favorite. Leeser led Margo 42-25 in the first round of voting on Nov. 3, and he has the support of all the defeated candidates.

Garcia, who pledged to manage the “shitshow” the next mayor will inherit (the word was not censored in her introductory video), is a first-time candidate, though she’s a veteran of city government. Politico’s Sally Goldenberg writes, “Over her tenure working for de Blasio, she became his pinch hitter in times of crisis, serving as interim head of the embattled public housing authority and the supervisor of an emergency effort to tackle lead paint in residences.”

However, Garcia already began distancing herself from the incumbent months before she launched her campaign, including in her September resignation letter. Another former administration member now running for mayor, former mayoral counsel Maya Wiley, also lit into de Blasio in her own kickoff. The mayor himself posted a positive 49-43 approval rating in an October Ipsos poll, though he has few vocal defenders in New York City politics or the media.

● KS Treasurer: Democratic Gov. Laura Kelly announced on Thursday that she would appoint Lt. Gov. Lynn Rogers to post of state treasurer, which will soon become vacant when Republican Jake LaTurner, who won the race for Kansas’ 2nd Congressional District last month, gets sworn in to Congress in January. As a result, control of the treasurer’s office will pass from Republicans to Democrats. Kelly, who is up for re-election in 2022, also said she would name a new lieutenant governor on Monday.

● Pres-by-CD: We’ve crossed a major milestone in our ongoing effort to calculate the results of the 2020 presidential election by congressional district, with data now available for more than 100 districts across 21 states—and more always on the way. We’ve also published a new map created by Daniel Donner showing the presidential winner and party control of each seat we’ve analyzed so far. To date, we’ve found four Democrats who sit in seats Donald Trump carried but no Republicans in districts Joe Biden won, though that will change soon.