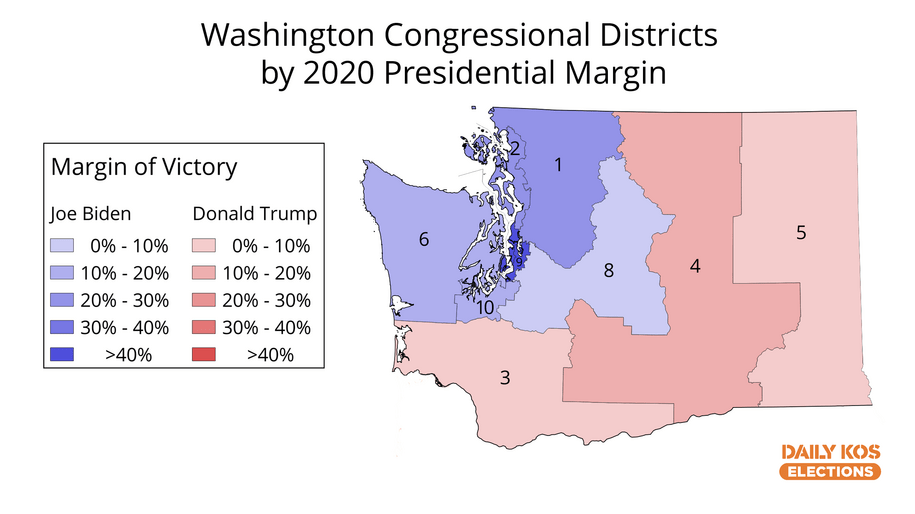 Our project to calculate the 2020 presidential results for all 435 congressional districts nationwide heads to Washington. You can find our complete data set here, which we’re updating continuously as the precinct-level election returns we need for our calculations become available.

Joe Biden carried Washington 58-39, which was an improvement over Hillary Clinton’s 54-38 showing four years ago, due at least in part to fewer voters choosing third-party options. Biden also took the same seven congressional districts as Clinton, all of which elected Democratic representatives last month, while Trump again won the remaining three GOP-held seats. You can find a larger version of our map here.

We’ll start with a look at the 8th District, a competitive seat where Democrats turned in a notably stronger performance at the top of the ticket. Biden won this constituency, which includes eastern Seattle suburbs and two rural counties east of the Cascades, 52-45, which was more than double Clinton’s 48-45 margin.

In 2018, in between those presidential races, Democrat Kim Schrier turned this seat blue when she won a very expensive open seat contest 52-48. Unexpectedly, Schrier won by that same margin this year against underfunded Republican Jesse Jensen in a race that attracted no serious outside spending from either party.

While the 8th District was the closest seat in the state in the 2016 presidential election, the GOP-held 3rd District takes that title for 2020. This seat in the southern part of the state backed Trump 51-47, which was a decline from his 50-43 showing four years earlier.

Despite that shift, though, Republican Rep. Jaime Herrera Beutler defeated Democrat Carolyn Long 57-43 in a rematch that attracted serious outside spending from both sides late in the final weeks of the campaign; Herrera Beutler had beaten Long by a smaller 53-47 spread two years before. Trump had little trouble carrying the 4th and 5th Districts in the eastern part of the state, while Biden won the remaining six seats with ease.

Democrats control both chambers of the legislature, as well as the governorship, but they’ll only have a limited say in redistricting. Instead, a bipartisan commission consisting of one appointee made by each of the four legislative majority and minority party leaders will be tasked with drawing up the maps. While the commission’s proposals need to be approved by the legislature, state law prohibits lawmakers from making major changes. If there’s a commission deadlock, the courts would craft the new maps instead.