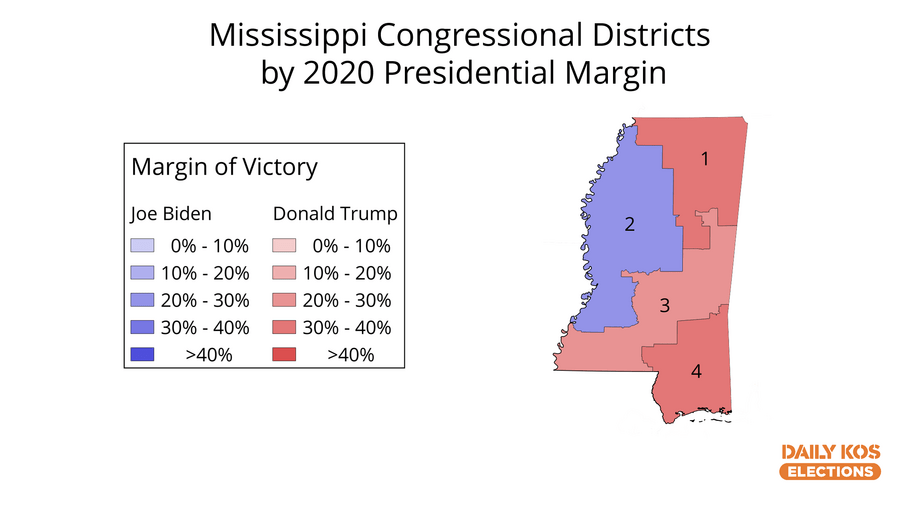 Our project to calculate the 2020 presidential results for all 435 congressional districts nationwide hits Mississippi, which remains a reliably red state up and down the ballot. You can find our complete data set here, which we’re updating continuously as we crunch new numbers.

Donald Trump’s 58-41 margin of victory in Mississippi was just a tick tighter than his 58-40 performance here four years ago, and he once again carried three of the state’s four congressional districts. The exception, as before, was Democratic Rep. Bennie Thompson’s 2nd District, which is located in the Mississippi Delta and Jackson and was created to ensure that Black voters could elect their preferred candidates. Joe Biden’s 64-35 performance in the 2nd exactly matched Hillary Clinton’s. You can find a larger version of our map here.

Biden did improve on Clinton’s margin in the trio of GOP-held seats, though the shifts mostly came as a result of diminished support for third-party candidates and were far too small to render any Republican incumbents remotely vulnerable. Rep. Trent Kelly’s 1st District in the northern part of the state favored Trump 65-34 after supporting him 65-32 in 2016. Rep. Michael Guest’s 3rd District in southwestern and eastern Mississippi, meanwhile, went for Trump 65-34, compared to 65-32 four years before.

Finally, Trump once again had his best showing in Rep. Steven Palazzo’s 4th District along the Gulf Coast, where his 68-30 victory was only a little smaller than his 69-28 performance from 2016. Republicans had complete control of redistricting in 2012 for the first time since Reconstruction, and they’ll again be in charge after the 2020 census.