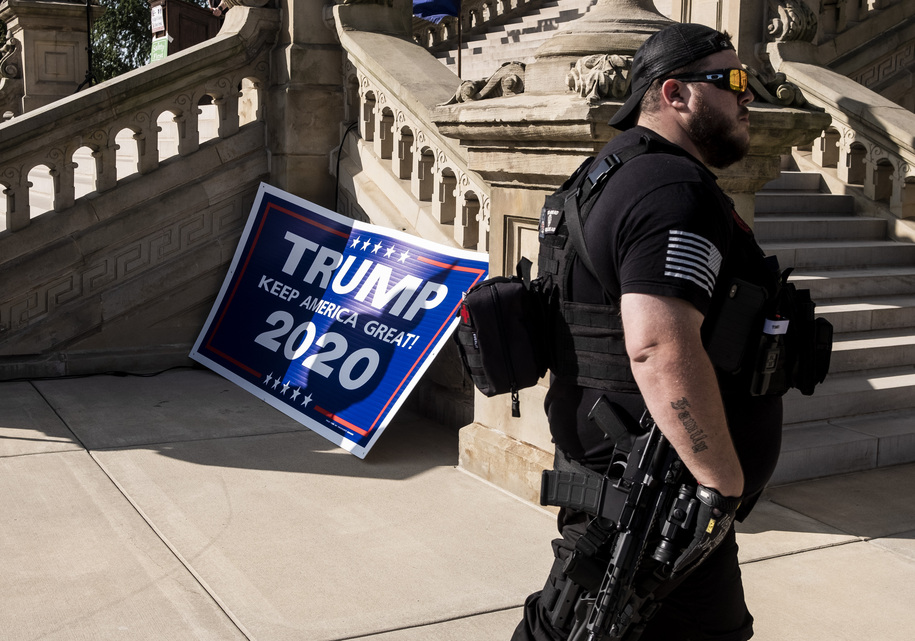 As electors across the country prepare Monday to finalize Joe Biden’s victory, the Michigan State House, Senate, and Capitol buildings will be closed due to “credible threats of violence,” according to Michigan Senate Deputy Chief of Staff and Press Secretary Amber McCann. “The decision was not made because of anticipated protests, but was made based on credible threats of violence,” McCann said. Only the 16 electors and those deemed essential for the Electoral College vote will be allowed in the state’s Capitol building.

Those threats have been fueled directly by Donald Trump and many GOP lawmakers who have either explicitly backed his bogus claims of election fraud or stood silently by as he riled up his rabid supporters. In Michigan, four Republican members of the state’s House of Representatives delegation along with 15 state GOP lawmakers signed on to a doomed lawsuit seeking to overturn the certified election results in Michigan, Georgia, Pennsylvania, and Wisconsin. The Supreme Court quickly dispensed with the suit over the weekend. While the lawsuit never had a prayer, widespread GOP support of the political rhetoric masquerading as a legal challenge gave its fraud claims an air of legitimacy in the eyes of Trump voters—stoking their list of grievances.

“These are individuals who, in my opinion, have violated their oaths of office,” Michigan Attorney General Dana Nessel told the Detroit Free Press on Saturday. “They’ve chosen Donald Trump over democracy and over their constituents.”

But GOP Michigan lawmakers aren’t done yet, with some members of the party reportedly organizing an event Monday to challenge the Electoral College vote and promote GOP electors in a state Trump lost by a substantial margin of more than 150,000 votes.

In a Monday morning radio interview with WPHM, GOP State Rep. Gary Eisen called it a “Hail Mary” effort, adding it would be “all over the news later” and he couldn’t guarantee there wouldn’t be violence at the event.

Q: “Can you assure me that this is going to be a safe day in Lansing? Nobody’s going to get hurt?”

Eisen: “No. I don’t know. Because what we’re doing today is uncharted.”

Eisen has a history of  promoting violent civil unrest on social media, including one Facebook post over the summer in which he bragged that he was going to “load up a few more [gun] mags” as protests pulsed through the country.

Republican Speaker of the House Lee Chatfield, and GOP Speaker-elect Jason Wentworth issued a statement Monday morning saying Eisen had been removed of his committee assignments for the rest of the term. “We as elected officials must be clear that violence has no place in our democratic process. We must be held to a higher standard,” said the statement.