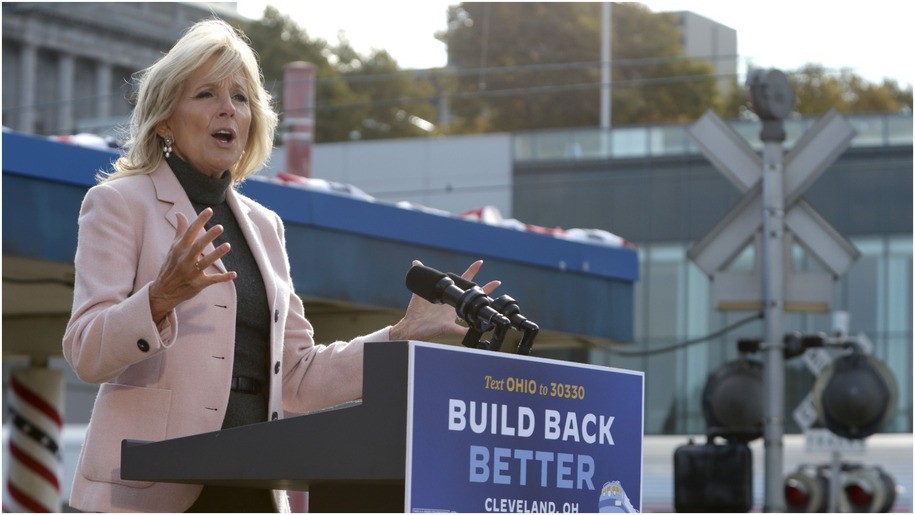 Unfortunately, the incoming first lady is not exempt from the rudimentary chauvinism applied liberally to women with careers. Most predictably, Wall Street Journal writer Joseph Epstein penned a now-viral op-ed, “Is There a Doctor in the White House? Not if You Need an M.D.” In it, he argued Dr. Jill Biden shouldn’t be respected as a doctor because she didn’t attend medical school. “Madame First Lady—Mrs. Biden—Jill—kiddo:“ he began in the ode to sexism, “a bit of advice on what may seem like a small but I think is a not unimportant matter. Any chance you might drop the ‘Dr.’ before your name? ’Dr. Jill Biden’ sounds and feels fraudulent, not to say a touch comic.” He went on to mock Dr. Biden for earning a doctorate of education and called “unpromising” the title of her dissertation, “Student Retention at the Community College Level: Meeting Students’ Needs.”

Worse yet, the Wall Street Journal‘s editorial page editor Paul Gigot backed Epstein’s piece on Sunday and criticized Dr. Biden’s media team for defending her. “Why go to such lengths to highlight a single op-ed on a relatively minor issue? My guess is that the Biden team concluded it was a chance to use the big gun of identity politics to send a message to critics as it prepares to take power,” Gigot wrote. “There’s nothing like playing the race or gender card to stifle criticism. It’s the left’s version of Donald Trump’s ‘enemy of the people’ tweets.”

He went on to call out several Democrats by name for having the audacity to label Epstein’s piece what it was: an unfiltered display of sexism. Michael LaRosa, Dr. Jill Biden’s spokesperson, called a specific line in Epstein’s work “pretty gross.” That line: “A wise man once said that no one should call himself ‘Dr.’ unless he has delivered a child.” LaRosa said of the op-ed overall that the newspaper should be “embarrassed to print the disgusting and sexist attack.” He tagged editorial features editor James Taranto and added: “If you had any respect for women at all you would remove this repugnant display of chauvinism from your paper and apologize to her.”

Chasten Buttigieg, Pete Buttigieg’s husband, used the unfortunate attention on Epstein’s work as an opportunity to raise money for the community college foundation at the school where Dr. Biden teaches. He also reprimanded Epstein for the work itself: ”The author could’ve used fewer words to just say “ya know in my day we didn’t have to respect women,” Buttigieg tweeted.

Between this link and the design @cmclymer launched we’re on track to raise $50,000 for the community college education foundation where @DrBiden teaches. Thanks so much to everyone who rebuked this disgustingly sexist article and turned those sour grapes into something good! https://t.co/nEuH5LpPbN

Doug Emhoff, Vice President-elect Kamala Harris’ husband, acknowledged just how much work it took for Dr. Biden to earn her doctorate in education. “Dr. Biden earned her degrees through hard work and pure grit,” he said in a tweet. “She is an inspiration to me, to her students, and to Americans across this country.  This story would never have been written about a man.”

Dr. Biden earned her degrees through hard work and pure grit. She is an inspiration to me, to her students, and to Americans across this country. This story would never have been written about a man. pic.twitter.com/mverJiOsxC

Although the incoming first lady didn’t address Epstein or the Wall Street Journal by name—and why should she— she posted a tweet Sunday that seemed to address the opinions expressed about her. “Together, we will build a world where the accomplishments of our daughters will be celebrated, rather than diminished,” she said in the tweet.

Dr. Biden, an educator for more than three decades, taught English at a community college in Delaware, a public high school, and a psychiatric hospital for teens. She earned two master’s degrees while working and raising a family and went on to earn her Doctorate in Education from the University of Delaware in January of 2007. While her dissertation may seem uninspired to the likes of white men who sit in tall castles judging the rest of us, maximizing student retention in community colleges is at the core of the very burden many community colleges carry. Fewer than 40% of community college students earn a certificate or degree within six years, according to the research nonprofit Brookings Institution. Dr. Biden, who also attended Brandywine Junior College in Philadelphia, reasoned that the university she attended needed to do a better job of addressing the whole student, from her counseling needs to advising and wellness.

Dr. Vincent Tinto, an expert on college retention, told the education journalism website EdSurge last month that his initial reaction to reading Dr. Biden’s dissertation was, “Amen.” He said: “The first two pages of her dissertation, where she describes her classroom and students, speaks volumes about her commitment to diversity.”

Recent defenses for the soon-to-be first lady flooded social media sites over the weekend. My favorite among them a tweet from Merriam-Webster explaining that the word “doctor” comes from the Latin word for “teacher.”

The word ‘doctor’ comes from the Latin word for “teacher.” https://t.co/wUihrn6Hyq

I’m disappointed by the unvarnished sexism of the @WSJ op-ed that minimizes @DrBiden’s academic accomplishments. I doubt a successful man with a doctorate and two masters degrees would be treated with the same level of condescension. Yours truly, Dr. Alma S. Adams

Let’s get one thing clear. Women don’t need permission to celebrate their accomplishments. @DrBiden is an accomplished woman, and yes, I will refer to our next #FLOTUS as #DrBiden.

RELATED: WSJ columnist thinks our future FLOTUS should be called ‘kiddo’ instead of ‘Dr. Jill Biden’