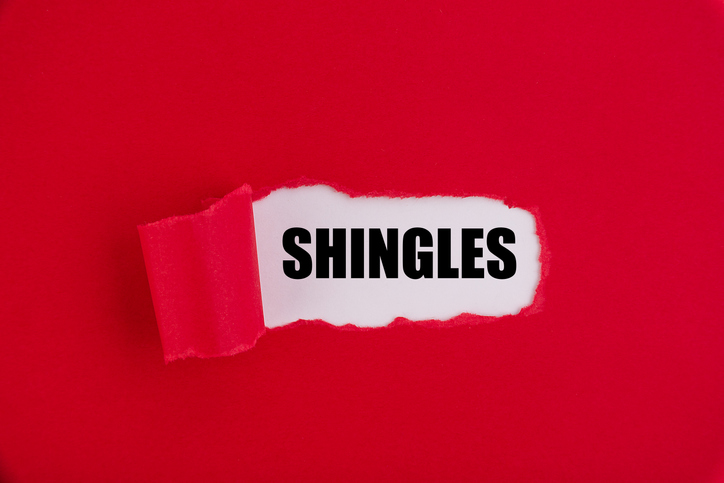 If you’re like 95% of American adults, you had chickenpox as a kid. Before the United States started its widespread vaccination program in 1995, there were roughly four million cases of chickenpox every year. So, most people suffered through an infection with this highly contagious virus and its itchy, whole-body rash.

But unlike many childhood viruses, the varicella-zoster virus that causes chickenpox doesn’t clear from the body when the illness ends. Instead it hangs around, taking up residence and lying dormant in the nerves, sometimes for decades, with the immune system holding it in check. In some people, it lives there harmlessly for the rest of their life. But in others, the virus can suddenly emerge and strike again, this time appearing as a different condition known as shingles.

What are the symptoms of shingles?

Like chickenpox, shingles also causes a blistering rash, but this time it generally appears as a painful band around one side of your ribcage or on one side of your face. The first symptom for many people is pain or a burning sensation in the affected area. You may also have fever, a headache, and fatigue. Along with the rash and other temporary symptoms, shingles can also bring unpleasant, long-lasting, and sometimes permanent complications, such as skin infections, nerve pain in the area where the rash appeared, or even vision loss.

What triggers shingles in some people and not others?

Experts don’t fully understand this. One theory is that shingles occurs when your immune system loses its ability to keep the virus in check.

After you get chickenpox, your immune system is able to recognize the varicella-zoster virus thanks to specialized immune system cells, called B and T cells, that are able to remember the virus and quickly marshal an attack on it. Factors that weaken the immune system increase your risk of developing shingles. These include

What can you do to prevent shingles?

While you may not be able to control certain factors that might trigger shingles, there are strategies you can use to prevent shingles. The most important is vaccination. Research shows that the shingles vaccine Shingrix is 90% effective in preventing an outbreak of shingles. Even if you do get shingles after being vaccinated, Shingrix greatly reduces your risk of developing persistent pain in the affected area, known as post-herpetic neuralgia.

In addition to getting vaccinated, it’s always a good idea to take steps to keep your body healthy, such as choosing healthy foods, staying active, and getting sufficient sleep. It’s not clear if healthy lifestyle habits like these can prevent shingles, but even if they don’t, they’re worthwhile because they will benefit your body in many other ways.