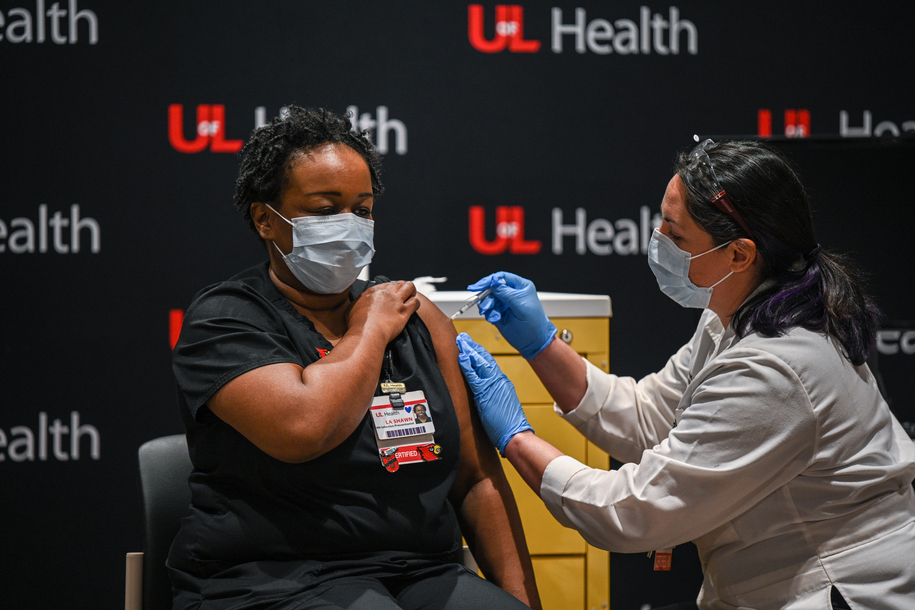 Thousands of healthcare workers lined up on Monday to receive their first dose of the Pfizer COVID-19 vaccine, and to say there was a feeling of relief is underselling it. In California, Gov. Gavin Newsome announced the arrival of vaccine with the words: “Hope has arrived.” New Jersey Gov. Phil Murphy called it “a day worth celebrating.” Shipments reached all 50 states and Puerto Rico on Monday. It wasn’t the end of the COVID-19 pandemic, but hopefully it was the start of a process that will restore the nation to something like normality.

Another big step forward came on Tuesday morning as the FDA gave initial approval to the vaccine from Moderna. The FDA review of Moderna’s submission for an emergency use authorization confirmed that their vaccine was 94.1% effective, making it very similar to Pfizer’s results. The FDA also stated that the vaccine didn’t raise any serious safety issues for people over 18. Now the agency has scheduled a repeat of what Pfizer’s vaccine went through last week: a review by a panel of outside experts on Thursday, and a meeting of FDA officials on Friday.

By next Monday, there’s a very good chance a second vaccine could be rolling out across the nation.

Last Thursday, a panel of epidemiologists, medical statisticians, pediatricians, and infectious disease experts voted 17-4 to approve the Pfizer vaccine following a review of the data and a day-long discussion. Most of the dissenting votes appeared to come over the single issue of whether there was enough data to authorize using the vaccine in people under 18. That should not be an issue in the Moderna discussion as the company has sought approval only in ages 18 and up.

In their instructions to the experts who will be reviewing the Moderna vaccine this Thursday, the FDA describes the vaccine as effective and does not list any specific safety concerns. The FDA also notes that the vaccine was 80.2% in participants who only received only a single dose rather than returning for a second shot. That’s a fantastic number as there are expected to be many real-world situations where people either forget, or fail, to return for the second dose of vaccine. For Pfizer, that number was just 50.2%. However, during the Pfizer review, the company showed detailed data indicating that the vaccine was highly effective after a single dose, but immunity took 12-14 days to fully develop. In the Pfizer trial, a cluster of participants actually caught COVID-19 in the days immediately following the first shot, which may indicate that getting the vaccine gave people a false sense of instant immunity—something that will need to be considered when giving instructions to patients and care givers.

The Moderna vaccine targets the same “spike protein” that the virus uses to attach to human cells, and uses a similar mRNA technology, so it’s not surprising that its efficacy is similar to that of the Pfizer vaccine. But one thing that’s different about the Moderna vaccine data is that the company conducted regular COVID-19 screenings of volunteers rather than just testing when people expressed symptoms, as in Pfizer’s phase 3 trial. As a result, Moderna can confirm that the vaccine doesn’t just prevent COVID-19 symptoms, but genuinely restricts COVID-19 infection. That’s an important factor in how the vaccines impact the pandemic. Based on these results, it’s likely that Pfizer’s vaccine also prevents infection, they just lack sufficient data to make that statement. AstraZeneca’s unapproved vaccine, which is based on a different technology, also appears to inhibit infection.

There’s one fact about Moderna’s vaccine that’s not in the FDA submission but is worth reviewing: This vaccine was literally created in a weekend all the way back in January. As soon as China published the complete genetic sequence of the virus, Moderna was able to use their mRNA technique to create a proposed vaccine within 48 hours. That’s the vaccine now headed for approval. In this particular case, Moderna (and Pfizer) were given a boost by previous research into a SARS and MERS vaccine, both of which identified the spike protein as an effective target. Still, the speed with which the vaccine was developed, along with its apparent safety and efficacy, make this a big win for companies like Moderna and Pfizer’s partner BioNTech, which bet big on mRNA vaccines.

Moderna’s vaccine is less temperature sensitive than Pfizer’s and can be stored at temperatures obtainable in ordinary refrigerators/freezers. This should assist in its distribution. Unlike Pfizer, where the government missed an opportunity to obtain additional doses, the Department of Health and Human Services has moved to secure 100 million additional doses (enough for 50 million people) of the Moderna vaccine. This is likely to be the vaccine that most Americans receive.