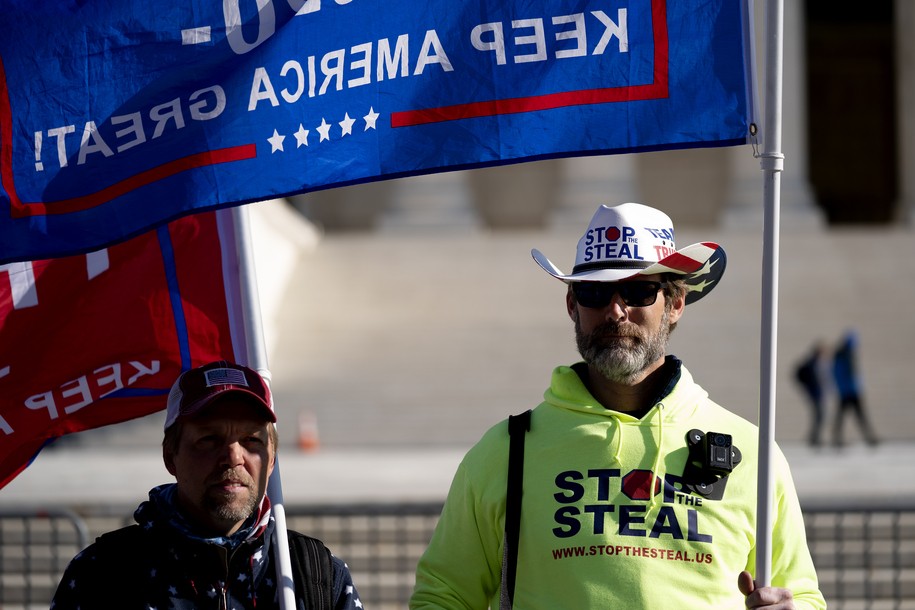 Since Election Day, Donald Trump has been trolling for dollars. Of course, trolling for dollars is also what he did before Election Day. It’s what he’s always done. The post-election trolling has taken on a very special character, thanks to Trump’s crack team of kraken wranglers. But well before the actual vote, Trump was feeding his followers Q-worthy claims of vote fraud and mass conspiracies.

On Tuesday, Houston police detailed how those poison seeds bore dangerous fruit in the days just before the election. That’s when a former Houston police officer purposely crashed into repair van, forced it off the road, pointed a gun at the startled man driving the van, forced him to the ground, put a knee on his back, and directed an associate to drive away with the van. Then the man who had just committed carjacking, assault, and brandishing a weapon … called the police. Because he was convinced that the van was full of fraudulent ballots.

It was full of air conditioner parts.

The Texas Tribune details how former police captain Mark Aguirre carried out the action described above as part of an even more elaborate scheme to uncover supposed election fraud in Harris County, Texas.  Former officer Mark Aguirre wasn’t just out there pulling over vans for fun; he was being paid to do it by a group funded by a Republican megadonor.

Aguirre was paid $266,400 by a group called “Liberty Center for God and Country”, headed up by GOP power broker Steven Hotze. Hotze would be the same man who, back in June, called up Texas Gov. Gregg Abbott to give him directions on how to handle Black Lives Matter protests.

“I want to make sure that he has National Guard down here,” Hotze told Abbott’s chief of staff, “and they have the order to shoot to kill if any of these son-of-a-bitch people start rioting like they have in Dallas, start tearing down businesses — shoot to kill the son of a bitches. That’s the only way you restore order. Kill ’em. Thank you.”

Hotze was also the money behind an effort that successfully repealed a LGBT nondiscrimination ordinance in Houston, as well as the originator of the Texas version of the “bathroom bill.” Hotze has repeatedly sued the state over social distancing restrictions passed to reduce the spread of COVID-19, including a new one filed just last Friday in an effort to block local mask mandates.

With that kind of reasoned leader at the helm, it’s not shocking that the Liberty Center hired Aguirre to “investigate voter fraud ahead of the 2020 election.” And it wasn’t just Aguirre. He subcontracted 20 private investigators, all of whom were out patrolling around tracking down supposed incidents of fraud. How this particular air conditioner technician, described by the Houston police as “innocent and ordinary” came to Aguirre’s attention isn’t clear, but the former policeman and a team of his contracted investigators stalked the man for four days. Then Aguirre rear-ended the man’s van, forced him from the road, and held him at gunpoint.

When police arrived to find Aguirre holding the technician at gunpoint, he explained that the man was at the center of a “huge” vote fraud scheme. Aguirre directed the police to a parking lot where one of his associates had taken the van, and told them it contained 750,000 fake ballots. Shockingly, it contained … air conditioner parts and tools.

Aguirre isn’t just a former officer, he’s a former captain. He has been on “indefinite suspension” since 2002. What did Aguirre do in 2002 that earned him an 18 year suspension? That was when Aguirre designed and led The Great Texas Kmart Raid. In what was supposed to be an operation to stop late night drag racing by local teens, Aguirre led a large force of officers into a Kmart parking lot where they arrested a total of 450 people — not one of whom was drag racing. People were arrested coming out of the store. They were arrested buying food from a restaurant. A ten-year-old girl was arrested and taken away from her father who was not arrested. Much of this was done at gunpoint, with officers directing shotguns at Kmart shoppers as they forced them into police vans.

The result of all this was an amazing raft of lawsuits that took years for Houston to process. And Aguirre’s extremely lengthy suspension. But of course, something like that didn’t stop Hotze from putting Aguirre at the head of his fraud investigation team. For Hotze, that Kmart raid was probably a big plus.

Aguirre was arrested in Houston on Tuesday. The only question being … what took so long?