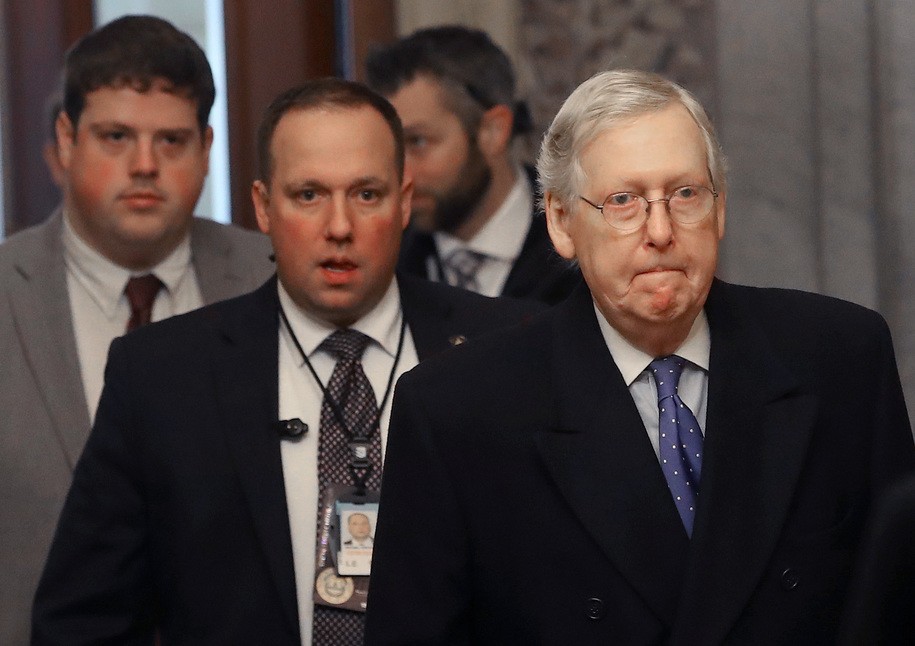 You may have noticed that, suddenly, after seven months of Sen. Mitch McConnell’s singular aspiration being to inoculate corporations from pandemic complications rather than actual people, McConnell finally reinserted himself back into relief negotiations—significantly boosting the prospects for a deal.

That’s because McConnell finally decided that he himself might have something to lose if he failed to lift so much as a single finger to help millions of Americans at risk of going of hungry and suffering financial devastation. What was that something? His Senate majority.

On a phone call with GOP senators, McConnell told the caucus that their colleagues Kelly Loeffler and David Perdue, who are both facing runoffs next month, were “getting hammered” over the issue of direct payments for individuals and families, according to CNN’s Manu Raju. Apparently the optics of two of the richest and most corrupt U.S. senators failing to go to bat for people who are actually getting hammered by the pandemic haven’t been great for Loeffler and Perdue—particularly when their leader’s so-called red line is immunizing giant corporations from any financial hardships.

And so, seven months after House Democrats passed the $3 trillion HEROES Act stimulus package, the white-hot inspiration of self-interest spurred McConnell to action. That’s why getting a congressional deal is now on the table and issuing direct payments to help Americans survive the darkest months of the pandemic is suddenly part of the discussion again. Democrats, who had championed another round of such payments for months, had been forced to drop it from talks because the same Republicans who passed a trillion-dollar tax giveaway to corporations in 2017 couldn’t bring themselves to do the same for desperate Americans during the pandemic.

But that’s all changed now. Nothing like the prospect of personal gain to focus the conservative mind. McConnell wants his majority dammit and those two Georgia Senate seats have been worth a pretty penny and then some for Perdue and Loeffler.

And while Democrats are now doing their best to leverage the GOP’s sudden change of miserly heart, the entire episode is a window into the next couple years of gridlock if McConnell manages to keep his precious majority, as The Washington Post’s Greg Sargent pointed out. Because without the immediate threat of an upcoming election to serve as a reminder that elected public servants are in fact supposed to be responsive to their constituents’ needs in a representative democracy, McConnell will revert immediately back to his usual posture of not lifting a finger for anyone but those in the GOP’s elite donor class.

We need all hands on deck to win the Georgia Senate runoffs on Jan. 5, and you can volunteer from wherever you are. Click here to see the Georgia volunteer activities that work best for you.