In Minnesota’s suburbs, Biden flipped one red district and turned another swingy seat into a blowout 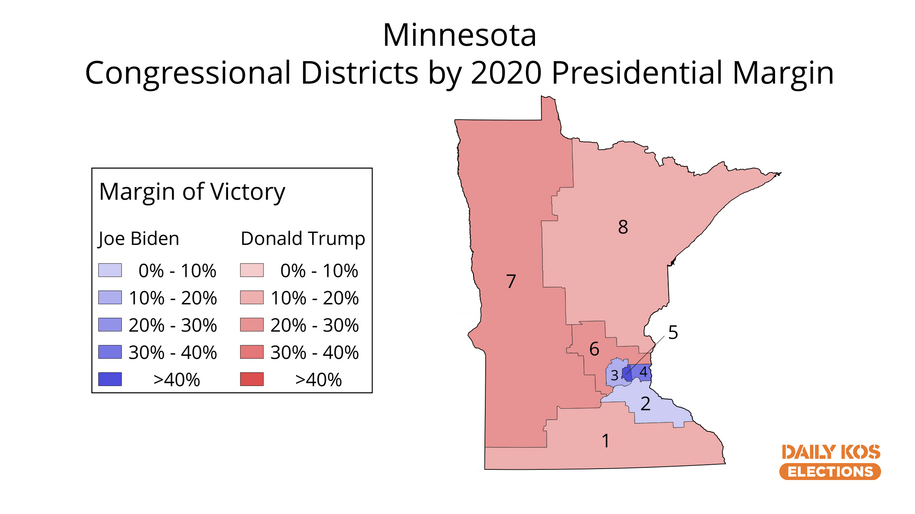 Republicans hoped that this would be the year they captured Minnesota’s electoral votes for the first time since Richard Nixon in his 1972 landslide, but it was not to be. Joe Biden won it 52-45 four years after Hillary Clinton took it by a tight 47-45 margin, though this is likely another state where Democrats benefited from a decline in third-party voting.

Biden, who improved on Clinton’s margin in all eight seats, also flipped the 2nd District in the Twin Cities suburbs, while Donald Trump again won the other four constituencies. The news wasn’t all good for Team Blue, though, as longtime Democratic Rep. Collin Peterson badly lost reelection in the 7th District, which was Trump’s best seat in the state. (You can find a larger version of our map here.)

We’ll start with the 2nd, which was very close in the prior two presidential contests: Barack Obama took it by an extremely narrow 49.07-49.01 (a margin of 226 votes), while Trump won it 47-45 in 2016. The area swung left in 2018, though, as Democrat Angie Craig unseated freshman Republican Rep. Jason Lewis 53-47 two years after losing an open-seat contest to him.

2020 was another good year for Team Blue, though the area still has a long way to go before Democrats can feel safe here: Biden took the 2nd 52-46, while Craig held off Republican Tyler Kistner by a smaller 48-46 in a contest that was briefly postponed following the death of Legal Marijuana Party Now candidate Adam Weeks.

The neighboring 3rd District also began the decade as a swing seat that Obama took only 50-49, but Trump’s toxicity with well-educated suburbanites has radically altered its electoral landscape. Clinton won 51-41 here in 2016, and two years later, Democrat Dean Phillips ousted Republican incumbent Erik Paulsen 56-44. The seat got worse for Republicans this year, with Biden winning in a 59-39 landslide as Phillips turned in another 56-44 victory.

The 4th and 5th Districts have long been Team Blue’s strongest areas in Minnesota, and that did not change this year. Rep. Betty McCollum’s 4th District in St. Paul backed Biden 68-30, compared to 62-31 for Clinton. Fellow Democratic Rep. Ilhan Omar’s 5th District in Minneapolis, meanwhile, supported Biden 80-18 four years after going for Clinton 74-18.

We’ll turn now to the four Trump seats, starting with the GOP’s pickup in the 7th District. This slice of rural western Minnesota has long been red turf, with Mitt Romney taking it 56-42, but it handed Peterson decisive wins as recently as 2014, even amidst the GOP wave. That all began to change in 2016, however, when Trump carried the district 62-31 and Peterson only held off an underfunded Republican named Dave Hughes 52-47.

A similar Peterson performance two years later in a rematch with Hughes served as a warning sign, especially when Republicans landed a far stronger nominee in former Lt. Gov. Michelle Fischbach for 2020. This time, Trump took the 7th District 64-34, only a slightly smaller margin than four years earlier and more than enough to power Fischbach to a strong 53-40 victory over the 15-term incumbent.

Republicans also retained their hold on two other seats that had swung from Obama to Trump in 2016 and elected GOP members two years later. The 1st District in the southern part of the state went from 50-48 Obama to 53-38 Trump. It swung back the following cycle, when Democratic Rep. Tim Walz left two years later to wage a successful bid for governor, and Republican Jim Hagedorn beat Democrat Dan Feehan in a very close 50.1-49.7 contest.

Feehan sought a rematch this year, and Democrats were encouraged by polls showing Biden in position to return this district to the blue corner. However, while Trump’s 54-44 showing wasn’t quite as strong as it was four years ago, it was enough for Hagedorn to prevail 49-46.

The 8th District, located in the Iron Range in the northeastern corner of the state, was a reliably blue area for decades, but those days are long gone. The seat swung from 52-46 Obama to 54-39 Trump in 2016, and Trump took it by an only slightly smaller 56-42 this time. Republican Pete Stauber won the 2018 race to succeed retiring Democratic Rep. Rick Nolan 51-45 and prevailed 57-38 this year.

The final seat in Minnesota is the 6th District in the northern Twin Cities exurbs, a longtime Republican bastion held by NRCC chair Tom Emmer. The district backed Trump 59-39 this year, a smaller margin than his 59-33 showing in 2016, but still better for Team Red than Romney’s 56-42 performance.

Neither party has enjoyed control of the redistricting process in decades, and courts have had to draw boundaries after the legislature and governor failed to agree on a map. Democrats control the governor’s office and the state House while Republicans have the Senate, so we’re likely in for another deadlock this time.