Sen. Sanders is livid on the Senate floor as Republicans block $1,200 to Americans AGAIN 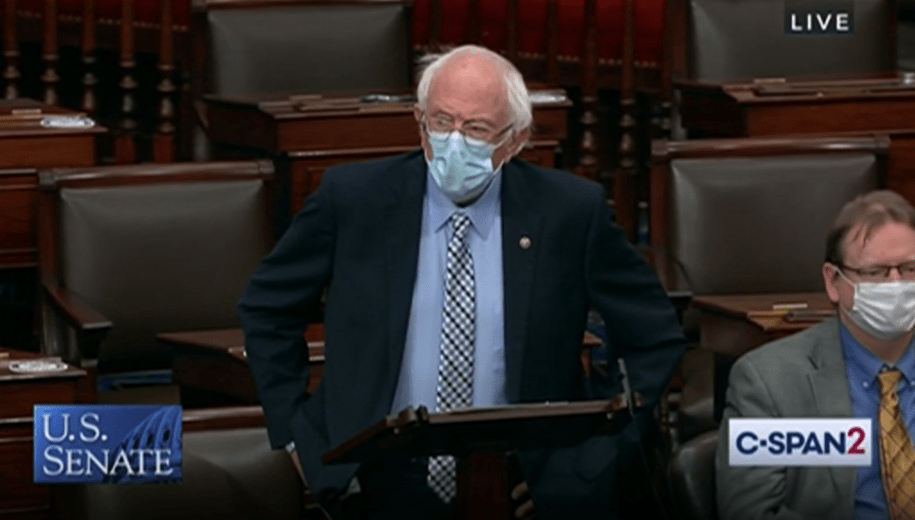 On Friday, Sen. Bernie Sanders of Vermont and Republican Sen. Josh Hawley of Missouri attempted to get a vote passed on a straight $1,200 “stimulus check” for Americans making up to $75,000. There are tens of millions (if not hundreds of millions) of Americans that would benefit from this insufficient but meaningful amount of money, especially during a global economic and public health crisis. GOP Sen. Ron Johnson of Wisconsin, who has spent most of his time trying to dig a grave for our democracy in service of Donald Trump and the Republican Party, blocked  the proposal.

Following Sen. Johnson’s truly grotesque speech, where he didn’t wear a mask because he’s an asshole, claimed he was “not heartless,” and said that he was worried about the … deficit, Sen. Sanders spoke. He was firm, direct, and absolutely, justifiably finished with the Republican Party’s monstrous display of sociopathy.

The senator from Wisconsin threw out some numbers. Let me throw out some other numbers. Half of the people in this country are living paycheck to paycheck. Millions of workers are trying to survive on starvation wages of $10 or $12 buck an hour. 90 million people are uninsured or underinsured, can’t afford to go to a doctor. 19 million families spending half of their limited incomes on housing. Madam president, today we have the most severe hunger crisis in America that we have had in decades. Children in this country are going hungry while a half million people are homeless and many millions more fear eviction. Today, as a result of the pandemic, not only do we have the worst health care crisis in 100 years, but the worst economic crisis since the Great Depression. So, madam president, I say to my colleague from Wisconsin, yeah, I will not support proposals that do not provide a nickel in unemployment benefits, not a nickel in direct relief to tens of millions of low-income and middle-income families. So, madam president, I would hope very much that this Congress appreciates the pain that is out there and that instead of worrying about tax breaks for billionaires or corporate welfare, let’s pay attention to the needs of working families and let us pass legislation which includes $1,200 direct payment to working-class families as we did in the CARES Act, $500 bucks to their kids, and certainly not taking a nickel away from unemployment and other important provisions that are currently being negotiated.

Fuck you Ron Johnson. You are now and always have been a stain of greed and ignorance.