Drumming down the walls of racism: Remembering Max Roach 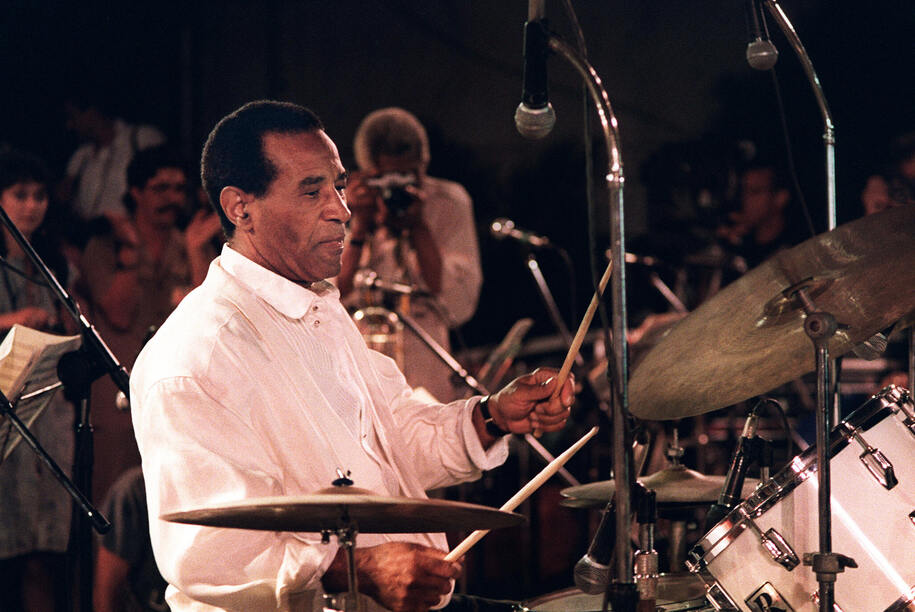 In the previous installment of this #BlackMusicSunday series, we started discussing jazz drummers. When we hear the word “jazz,” we don’t always make the connection to the word “politics” or to “civil rights” and yet those ties are there, albeit not always up front and in your face. In the case of the great jazz drummer Max Roach, he was a musician who was unabashedly politically engaged, and outspoken about it.

Roach, who was born in North Carolina in 1924, was raised in New York City, where he started drumming at age 10. Over his lengthy career in music, academia, and activism, which ended with his death in 2007, he received a MacArthur Genius Fellowship in 1988, eight honorary doctorates, and entered the Downbeat Hall of Fame in 1980. Yet whenever I listen to his music or to interviews with him, I am reminded that he also struck blows to the racial status quo in America, and to injustices around the world—like apartheid in South Africa—and not just with his drumsticks.

The Freedom Now Suite, written by drummer Max Roach and writer/singer Oscar Brown Jr., is perhaps the best-known jazz work with explicitly political content. Known primarily through the Candid recording We Insist! Freedom Now Suite, the album’s liner notes begin with a thunderous quotation from A. Philip Randolph: “A revolution is unfurling—America’s unfinished revolution. It is unfurling in lunch counters, buses, libraries and schools—wherever the dignity and potential of men are denied. Youth and idealism are unfurling. Masses of Negroes are marching onto the stage of history and demanding their freedom now!”

The album cover photograph commemorates the student lunch counter sit-ins that began in Greensboro, N.C., on Feb. 1, 1960, making explicit through visual means the link between the political events of 1960 and the subject matter of the Freedom Now Suite. The five movements of the work (“Driva’ Man,” “Freedom Day,” “Triptych: Prayer/Protest/Peace,” “All Africa” and “Tears for Johannesburg”) are organized as a historical progression through African-American history, a shape similar to the one in Duke Ellington’s Black, Brown and Beige. The Freedom Now Suite moves from slavery to Emancipation Day to the contemporary civil-rights struggle and African independence.

Take a listen. For more on lyricist Oscar Brown Jr., see this #BlackMusicSunday story from October.

Always among the most politically active of jazz musicians, Mr. Roach had helped the bassist Charles Mingus establish one of the first musician-run record companies, Debut, in 1952. Eight years later, the two organized a so-called rebel festival in Newport, R.I., to protest the Newport Jazz Festival’s treatment of performers. That same year, Mr. Roach collaborated with the lyricist Oscar Brown Jr. on “We Insist! Freedom Now Suite,” which played variations on the theme of black people’s struggle for equality in the United States and Africa.

The album, which featured vocals by Abbey Lincoln (Mr. Roach’s frequent collaborator and, from 1962 to 1970, his wife), received mixed reviews: many critics praised its ambition, but some attacked it as overly polemical. Mr. Roach was undeterred. “I will never again play anything that does not have social significance,” he told Down Beat magazine after the album’s release. “We American jazz musicians of African descent have proved beyond all doubt that we’re master musicians of our instruments. Now what we have to do is employ our skill to tell the dramatic story of our people and what we’ve been through.”

“We Insist!” was not a commercial success, but it emboldened Mr. Roach to broaden his scope as a composer. Soon he was collaborating with choreographers, filmmakers and Off Broadway playwrights on projects, including a stage version of “We Insist!”

Abby Lincoln’s powerful wordless cry in “Tears for Johannesburg” adds a vocal dimension to the Suite.

I’ve always felt that this Roach and Brown Jr. tune should become our Juneteenth anthem.

Listening to Max Roach talk about music history, his own story, and Black politics has long fascinated me through the years. He was a superb educator.

Here he is in a clip with kids at the Harlem School of the Arts, teaching them about improvisation in On the Edge: Improvisation in Music, which was produced in 1992 by the U.K.’s Channel 4. The four-part miniseries was written and produced by British guitarist Derek Bailey.

Initially funded in 1986 by the National Endowment for the Arts, the Howard University Jazz Oral History Project (HUJOHP) focuses on the evolution of jazz music from the 1940’s through the late 1950’s.  These years are often identified by musicologists as the bebop era—one of the most innovative and creative periods in the history of American music.  The bebop style provided the foundation for modern music throughout the world and continues to be a major influence more than sixty years later.  The major objective of the project was to conduct in-depth interviews with musicians who were active during the “52nd Street period” of bebop.  It was in the area of 52nd Street in New York City during the 1940’s where several jazz clubs presented a new music, representing the culmination of a style that had been created and nurtured by African American musicians.[…]

The HUJOHP interview with Max Roach was conducted by the then-young future jazz historian W.A “Bill” Brower. Roach talks about his involvement with the movement and bringing together elements from gospel and jazz.

A full transcript of the interview is available for download here.

Another extensive interview with Roach is now available online; in it, visual artist Jomo Cheatham speaks with the legend in Chicago in May 1993. It’s fascinating to hear Roach talk about his family moving from the South to New York City during the Depression, the impact of the WPA on Black artists, and how the he discovered drum-playing during that time when his parents parked him and his older brother in a church day care center.

In 1981, Roach recorded “The Dream/It’s Time” as a tribute to Rev. Dr. Martin Luther King. The cut featured Roach on drums, chimes, tympani, and percussion; Odean Pope on tenor sax, alto flute, and oboe; Cecil Bridgewater on trumpet and flugelhorn; and Calvin Hill on bass. Dr. King’s legendary speech unfolds in a duet with Roach’s drum.

The album title, Chattahoochee Red, refers to the Atlanta Child Murders of that year.

During the early 80s, the city of Atlanta, Georgia, was terrorized by the Atlanta Child Murders. Many of the bodies were recovered from the Chattahoochee River, and the title refers to the bloodshed of the victims.

The Atlanta Child Murders were recently covered in an HBO documentary series after Mayor Keisha Lance Bottoms reopened the cases.

While searching for clips to include here, I ran across this celebration of Max Roach’s music from North Carolina. It seems like a good place to close.

His legacy lives on.

See you in the comments for more Max Roach—and other great jazz drummers, past and present.