New Mexico’s 1st District, which might soon host special, was the state’s bluest for first time ever 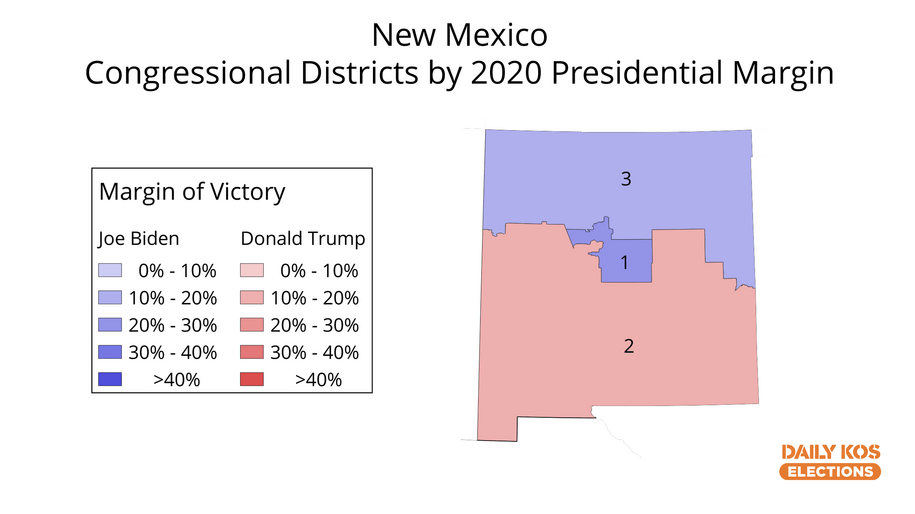 Daily Kos Elections’ project to calculate the results of the 2020 presidential election for all 435 congressional districts makes its next stop in New Mexico, which was the site of one hotly contested House race this year and could soon host a special election in a different district. As always, we’re providing detailed county-by-county breakdowns, and we also have an extra-large map of the results you can explore.

With the benefit of hindsight, it’s no surprise that southern New Mexico’s conservative 2nd District returned to form in 2020 and ousted freshman Democratic Rep. Xochitl Torres Small, given Donald Trump’s strong 55-43 margin of victory. On the margins, that actually represented a small increase from his 50-40 win four years earlier, though the 2016 numbers were skewed somewhat by former Gov. Gary Johnson, who took a sizable 9% running on the Libertarian ticket.

Torres Small won a huge upset in the 2018 blue wave when she defeated Republican Yvette Herrell 51-49 after GOP Rep. Steve Pearce departed for an unsuccessful run for governor. But Herrell came back for a rematch and prevailed, though her 54-46 win was narrower than Trump’s 12-point spread.

The state’s two other districts, both reliably blue, easily went for both Joe Biden and their respective Democratic House candidates, but there was an interesting flip-flop: For the first time in a presidential race since New Mexico added a third congressional seat following the 1980 census, the 1st District gave a higher share of its vote to the Democrat than the 3rd. While the district lines have shifted somewhat over time, they’ve been largely stable for the last 30 years, with the 1st anchored by Albuquerque and the 3rd spreading out from Santa Fe.

But it’s nevertheless welcome news for Washington, D.C. Democrats, who’ve expressed some apprehension about Biden tapping 1st District Rep. Deb Haaland to become the first Native person to head up the Department of the Interior, a move he’s reportedly about to announce. While Republicans could be competitive in a special election here, a seat Biden won by 23 points is probably at the outer limits for them.

The key reason New Mexico’s districts haven’t changed much since the 1990s is that state government was divided between Democrats and Republicans in recent redistricting cycles, leading a judge to impose new maps each time that made as few changes as possible while ensuring population equality. That could change next year, however, as Democrats will have full control of redistricting for the first time since 1991.