Republicans once hoped to compete in Connecticut, but Biden improved in every congressional district 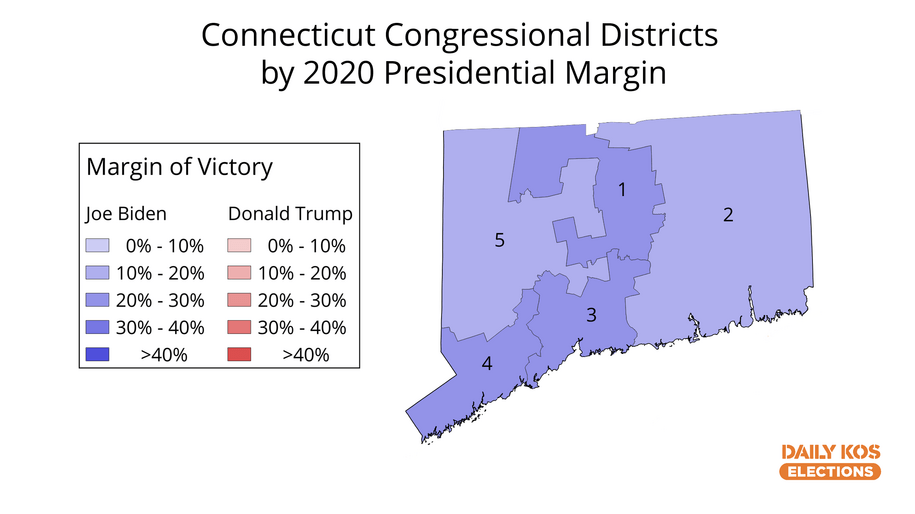 Our project to calculate the 2020 presidential results for all 435 congressional districts nationwide goes to Connecticut, where Team Blue had a strong night. You can find our complete data set here, which we’re updating continuously as the precinct-level election returns we need for our calculations become available.

Joe Biden won the Nutmeg State 59-39, which was an improvement over Hillary Clinton 55-41 victory four years ago, though a diminished performance by third-party candidates likely played a role. Biden, like Clinton, also carried each of the state’s five congressional districts, including two that were unexpectedly close in 2016. You can find a larger version of our image here.

The 2nd District in the eastern part of the state supported Biden 54-44 after backing Clinton only 49-46. The seat is held by Democratic Rep. Joe Courtney, who first won the previous version of the district by 83 votes in 2006 but has not faced a close race since then.

The 5th District, which includes northern Fairfield County and northwestern Connecticut, likewise went for Biden 55-44 after supporting Clinton by a much smaller 50-46 spread. The GOP, though, never was able to take advantage of Donald Trump’s relatively strong showing here in 2016. Democrat Jahana Hayes defeated an underfunded Republican 56-44 in an open seat race two years ago, and she won 55-43 this time.

Democrats control the governorship and both chambers of the legislature, but they probably won’t be the ones drawing the new congressional lines. The state constitution requires two-thirds of each chamber to pass a new map for it to take effect, and while Democrats won a supermajority in the state Senate last month, they fell short in the House. If the legislature can’t agree on new boundaries, the task would fall to a bipartisan “backup” commission.