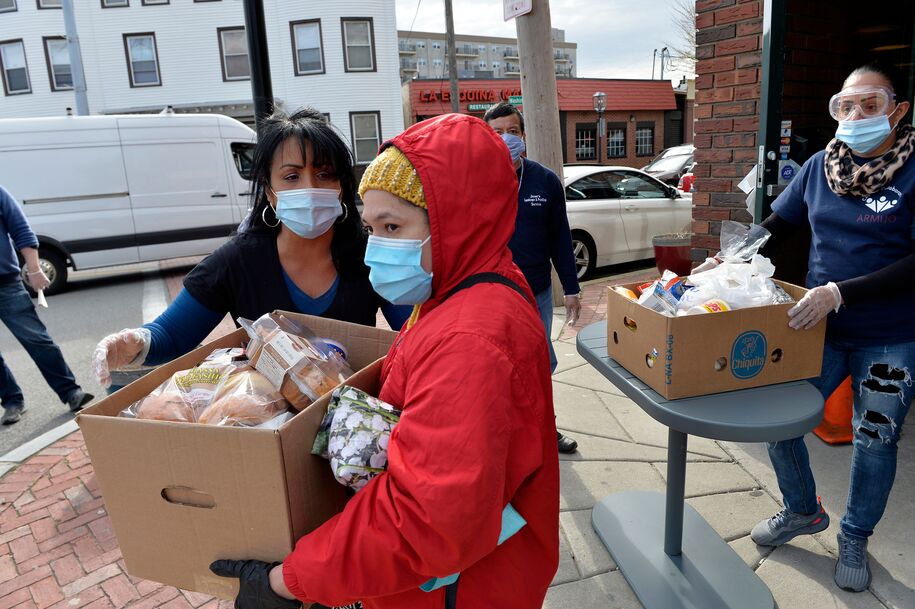 To say the COVID-19 crisis has decimated the United States would be an understatement. Since March, tens of millions of people have lost their jobs and are now facing food insecurity and eviction. However, there is one group for whom pandemic unemployment has been particularly brutal and unrelenting: Latina immigrants.

Between April and October, Latina immigrants consistently experienced the highest rates of unemployment, according to interactive data tools created by the Migration Policy Institute (MPI) that track trends in unemployment for U.S.-born and immigrant workers by gender, race/ethnicity, educational attainment, and industry. In May, Latina immigrants saw their unemployment peak at 18.5% before declining to 11.2% in September 2020—”even as jobless rates for immigrant men and U.S.-born men and women never topped 16 percent and fell below 8% in September,” MPI reported. As of November, 8% of immigrant women workers remained unemployed, compared to 6.4% of all workers nationwide.

Broadly, the COVID-19 recession has affected women more than men because women are heavily represented in service jobs that were hit hardest by pandemic closures and restrictions. This also means that younger workers and those without college degrees were disproportionately affected by pandemic-related unemployment. All of these categories overlap with Latina immigrants, who on average are younger than other U.S. workers, have less educational attainment, and are more likely to work in industries that were impacted by the recession COVID-19 created.

In U.S. reporting and analysis about the effect of the pandemic on “Americans,” it’s unclear if the nation’s 11 million undocumented immigrants are reflected in the data. Julia Gelatt, a senior policy analyst with MPI’s U.S. Immigration Policy Program, told Prism that when her organization began looking at unemployment rates, they looked at all immigrants, including naturalized citizens, Lawful Permanent Residents, undocumented immigrants, and temporary workers—essentially anyone who was born outside of the United States.

“Losing jobs is hitting unauthorized immigrants much harder in some ways because they don’t have access to the safety nets that legal U.S. residents can access. Unauthorized immigrants aren’t eligible for unemployment insurance, they weren’t eligible for stimulus checks, and depending on the citizenship status of their children, they may or may not be able to get a small amount of food stamps just for their children.” Gelatt said. “A lot of the safety net that’s available, no matter how inadequate it may be for other U.S. workers, it’s not at all available for unauthorized immigrant workers. Their only sources of support are private charities—help from a church, or help from a food pantry.”

Back in May, the Urban Institute predicted that employment and earnings losses related to the pandemic would likely impose an “especially high toll” on Latinx adults who are noncitizens. This was certainly true for Marcela Rodrigues-Sherley, an asylum-seeker from Brazil currently based in New York. As an English speaker and recent college graduate, the 25-year-old says that among Latina immigrants she is “more privileged than most,” but when COVID-19 hit during her last semester of college, she lost everything—her housing and the three jobs that kept her afloat as a full-time student.

In March, Rodrigues-Sherley’s university in Western Massachusetts informed students that they could no longer live on campus and that all on-campus jobs would be frozen. Because of her immigration status, she was part of a tiny percentage of students who were transferred to single rooms on campus and allowed to stay, but they had to adhere to strict social distancing rules or they would be kicked off campus. This largely meant students could not leave their rooms, not even to eat on campus. Given that Rodrigues-Sherley had also just lost her jobs working the front desk at the campus cultural center, assisting a professor, and babysitting, this meant she largely spent all day alone in a small room on a deserted campus, a far cry from her once busy and bustling life.

“I became really, really depressed,” Rodrigues-Sherley said. “I started to struggle really badly with my mental health. I can’t explain how stuck I felt. It was like everything changed in an instant.”

Her depression became so bad that she couldn’t focus on completing the assignments she needed to graduate. For the sake of her mental health, she left Western Massachusetts for New York City with a $1 bus ticket. Her partner lived in the city and the couple had already planned to live together after she graduated. At the time, New York City was the belly of the beast, the epicenter of  the COVID-19 crisis in the U.S. It was eerily quiet when she arrived, but Rodrigues-Sherley said her spirits immediately began to brighten once she was safe inside her partner’s apartment.

It’s been a long road since the move in early April. After Rodrigues-Sherley cranked out her thesis, she joined the ranks of millions of people nationwide looking for employment during the pandemic, but she had an additional barrier. Until U.S. Citizenship and Immigration Services sent her work permit in the mail, she could not legally work. As an added setback, this was happening around the same time that nearly 70% of USCIS employees were furloughed because of the pandemic, which created a backlog for immigrants waiting on crucial paperwork.

Rodrigues-Sherley eventually graduated and got her work permit in July, but finding a job wasn’t easy. She was rejected “over and over again,” including when applying to service industry jobs at places like Starbucks and Chipotle. The new college graduate was eventually hired to work at the front desk of a coworking space, but the job didn’t last long after a racist incident led her to quit. Now she’s trying her hand at freelance journalism, another industry ravaged by the pandemic. As Prism recently reported, freelancing is especially challenging for women of color journalists and COVID-19 has only made it worse.

Like other Latina immigrants locked out of even the limited benefits extended to American citizens, Rodrigues-Sherley has leaned heavily on mutual aid and personal connections to financially and emotionally survive the pandemic. As COVID-19 rates surge across the U.S., the 25-year-old urged Americans to remember that the stakes are extremely high for immigrant communities.

“Things have felt very hopeless for a lot of people in the community,” Rodrigues-Sherley said. “I’m just looking forward to the day where it doesn’t feel like every day is just about survival.”

Tina Vasquez is a senior reporter for Prism. She covers gender justice, workers’ rights, and immigration. Follow her on Twitter @TheTinaVasquez.