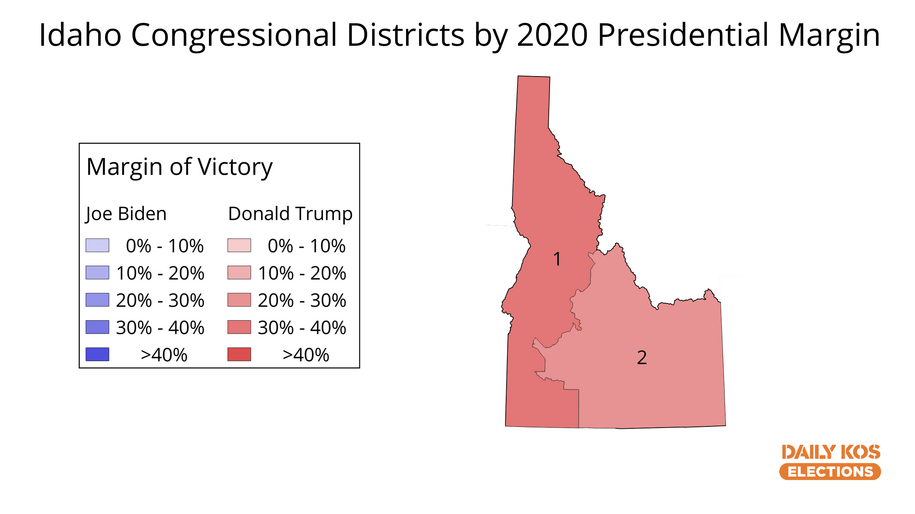 Idaho once again proved itself as one of the reddest states in the nation this year: As in 2016, it gave Donald Trump his fifth-best margin in the country in November. But without the presence of conservative independent Evan McMullin on the ballot this time, the contours of the 2020 elections looked different, especially when drilling down to the congressional district level.

Four years ago, Idaho was McMullin’s second-strongest state after Utah, thanks to the large Mormon population in the state’s southeastern corner along the Utah border. That region is contained in the 2nd Congressional District, which Trump won 54-30, with McMullin taking 9% and Libertarian Gary Johnson 4%. This time, he carried it 60-37, as many once-squeamish Mormon voters returned to the Republican fold.

McMullin’s impact was considerably smaller in the 1st District, which runs along Idaho’s western border all the up through the northern panhandle. In 2016, Trump won the 1st 64-25, while McMullin and Johnson won 4% apiece; this year, Trump dominated the district 67-30. Needless to say, both of the state’s Republican members of the House easily won reelection. (Click here for our full-size map.)

Idaho’s district boundaries have remained remarkably stable for a long time, and there’s no sign that they’ll shift much as we head into the next round of redistricting. Though Republicans control every branch of state government, they won’t be in charge of producing new maps. Instead, the constitution hands authority to an independent bipartisan commission evenly divided between the two parties, with a two-thirds majority required to pass any plans. Naturally, Republicans have tried to pass an amendment that would stack the commission in their favor, but they haven’t been successful yet.