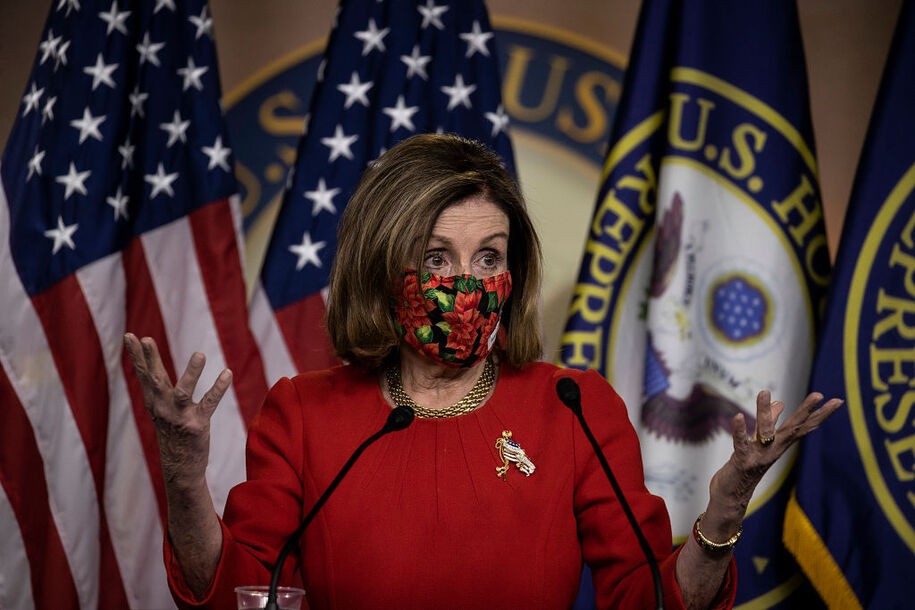 The House held a rare Christmas even pro-forma session, attempting to pass by unanimous consent an elegantly simple bill to do what the squatter in the Oval Office has demanded: increase the direct payments in the coronavirus relief bill to $2,000 from $600. Rep. Steny Hoyer made the request of the chair, Rep. Debbie Dingell in this case, informed him that it had not been cleared by bipartisan floor and committee leadership—Minority Leader Kevin McCarthy in this case—and can’t be considered. So that’s that for now. Merry Christmas.

After the session House Speaker Nancy Pelosi told reporters “Today, on Christmas Eve morning, House Republicans cruelly deprived the American people of the $2,000 that the President agreed to support. If the President is serious about the $2,000 direct payments, he must call on House Republicans to end their obstruction.” This attempt was in response to Trump’s tantrum in which he is threatening both a government shutdown and to withhold the assistance in the relief bill the Congress had finally agreed upon and passed earlier this week. Trump has not just taken the $600 checks hostage, but extended unemployment insurance, eviction moratoriums for millions as well as vaccine procurement and distribution funds—about $900 billion of critical, albeit inadequate, pandemic response. And threatening to shutdown government. And oh, by the way vetoed the defense authorization bill, the first time that’s happened in 60 years.

That will bring the House back on Monday, to override Trump’s veto and to attempt to pass their $2,000 direct payments bill. “Hopefully by then the President will have already signed the bipartisan and bicameral legislation to keep government open and to deliver coronavirus relief,” Pelosi said after Thursday’s session. The House could also vote on a continuing resolution to keep government open for, well, any length of time they want, like until after January 20 when we’ll have a Biden administration, though that would also require Trump’s signature.

Pelosi is reportedly working with Treasury Secretary Steven Mnuchin to figure out how to avert all these crises, but the problem is and will continue to be Trump. Mnuchin doesn’t have any juice with him anymore, no one does. He’s totally unconstrained and actually seems to still believe that he won’t be kicked out of the White House on January 20. He’s apparently decided that taking a pandemic-ravaged government and populace hostage is how to achieve that end.